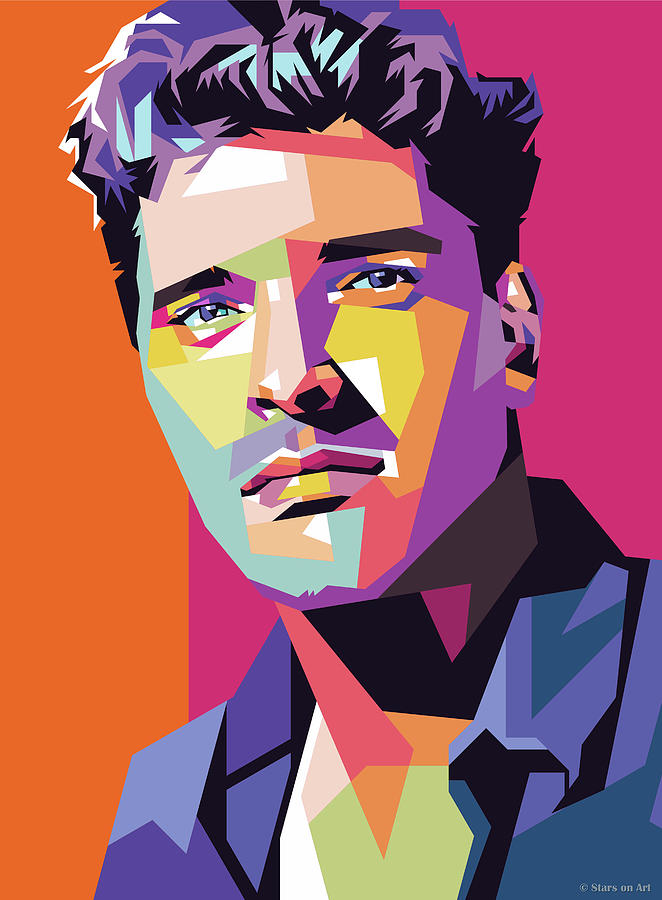 Burt Lancaster pop art portrait. Burt Lancaster (1913-1994) was an American actor and producer known for playing tough guys with a tender heart. Over his 45-year career in film and, later, television, he also succeeded with more complex and challenging roles.

He was nominated four times nominee for the Best Actor Academy Award (winning once). He also won two BAFTA Awards and one Golden Globe Award for Best Lead Actor. The American Film Institute ranks him as #19 of the greatest male stars of classic Hollywood cinema.

His first significant role was in “The Killers” in 1946, costarring Ava Gardner. Its success launched both of their careers. In 1953, Lancaster played Deborah Kerr’s lover in the military drama “From Here to Eternity,” a box office hit that won eight Academy Awards, including Best Picture Actor nomination for Lancaster. In 1956, he starred in “The Rainmaker” with Katharine Hepburn, which earned him another Best Actor Golden Globe nomination, and in 1957 he starred in the western, “Gunfight at the O.K. Corral” with frequent costar Kirk Douglas.

He took on different roles in the 1960s, such as the charismatic biblical con-man in “Elmer Gantry” (1960), for which he won the Academy Award and the Golden Globe for Best Actor. He then played a Nazi war criminal in the all-star, war-crime-trial film, “Judgment at Nuremberg” (1961). As a bird expert prisoner in “Birdman of Alcatraz” (1962), his role won him another BAFTA Award for Best Foreign Actor and his third Oscar nomination. In 1964, he played a US Air Force General who, opposed by a Colonel played by Kirk Douglas, attempts to overthrow the President in “Seven Days in May.” He later played an explosives expert in the western “The Professionals” (1966).

Lancaster starred in a continual series of box-office hits, including the air-disaster drama “Airport” (1970), and the crime-romance “Atlantic City” (1980), winning the BAFTA for Best Actor and landing his fourth Oscar nomination.
(credit: Wikipedia)