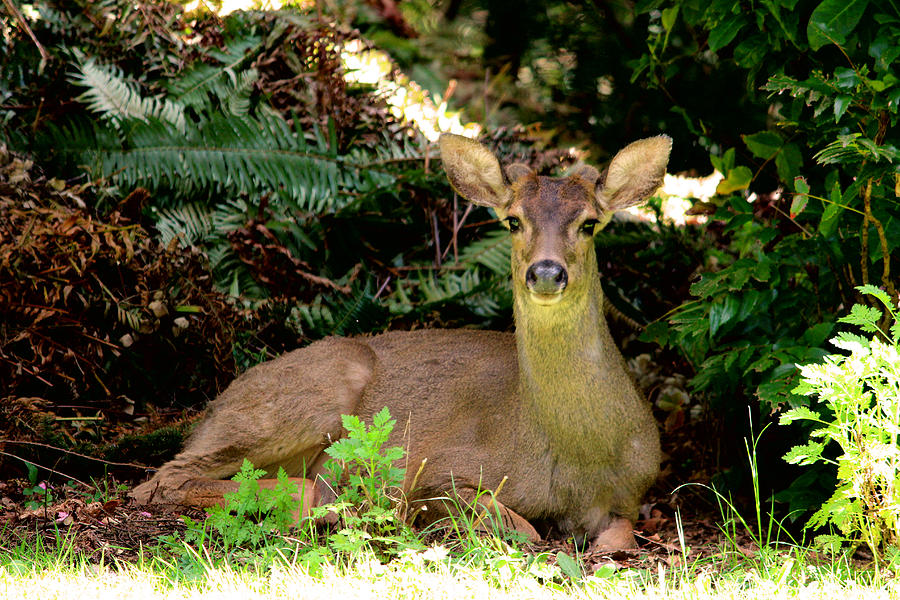 This sweet buck was resting after all his other activities in the yard. He made a bed out of the ferns and leaves. He looks comfy doesn't he? So funny, and serene. I didn't realize that the green color on his neck was from sleeping in the ferns. The underside of the fern was making his neck turn green.
Here are some of those facts about Black Tailed Deer, and White Tailed Deer. Not sure which is which anymore. I think we could have Hybrids around here now.
Here's some of that info you might want to know about.
Deer are among the most familiar animals of Washington, and in many places they are the largest wildlife that people encounter. Their aesthetic beauty is appreciated and admired, although their fondness for garden and landscape plants tries some peoples’ patience.
Two species and four subspecies of deer occur in the state
Rocky Mountain mule deer (Odocoileus hemionus hemionus,), or mule deer, inhabit areas east of the Cascades in Washington, preferring open forests and sagebrush meadows.During summer, mule deer are tan to light brown; during winter, they are a salt-and-pepper gray. They have large, dark-edged ears, from whence they derive their name. The 7 to 8 inch tail of a mule deer is white, except for a black tip. Mule deer are the largest deer in Washington. Adult buck (males) weigh up to 250 pounds; adult doe (females) weigh 120 to 170 pounds.
Columbian black-tailed deer (Odocoileus hemionus columbianus) are our most common deer subspecies. They occur from the crest of the Cascades west to the ocean, preferring brushy, logged lands and coniferous forests. Many of the physical characteristics of black-tailed deer are similar to those of the larger mule deer. The tail is broader and the backside of the tail is covered with dark brown hair that grades to black near the tip. When alarmed or fleeing from danger, the tail may be raised, displaying the broad, white underside. Adult black-tailed deer bucks weigh 140 to 200 pounds and
White-tailed deer (Odocoileus virginianus idahoensis, Fig. 2) occur in eastern Washington on farmlands, in low-elevation stream and river corridors, and near populated areas.White-tailed deer are usually reddish tan in summer and brownish gray in winter. They derive their name from their broad, 10 to 11 inch long tail. When alarmed, white-tailed deer raise their flaglike tail, displaying the white underside. White-tailed bucks weigh 150 to 200 pounds and adult does tip the scales at 110 to 140 pounds. Food and Feeding Habits
•Deer eat a wide variety of plants, but their main food item is browse—the growing tips of trees and shrubs. In late winter and early spring, deer eat grass, clover, and other herbaceous plants (Table 2).
•Deer also eat fruit, nuts, acorns, fungi, lichens, and farm and garden crops if available.
•For their first few weeks of life, fawns thrive on milk, which is more than twice as rich in total solids as the best cow milk.
•Deer eat rapidly and, being ruminants, initially chew their food only enough to swallow it. This food is stored in a stomach called the “rumen.” From there it is regurgitated, then re-chewed before being swallowed again, entering a second stomach where digestion begins. From there it is passed into a third and then a fourth stomach, finally entering the intestine.
Shelter and Range Needs
•Deer are sometimes referred to as “edge” species, meaning they thrive at the interface of openings and cover patches. This allows deer to feed in productive openings while being close to escape cover.
•Many wooded suburban environments, such as parks, greenbelts, golf courses, and roadsides, meet the needs of deer.
•Mule deer can move long distances during spring and fall migrations to avoid mountain snow. Mule deer summering in the Cascades migrate as far as 80 miles to reach adequate winter range.
•Black-tailed and white-tailed deer normally reside within a ˝ to 3 square-mile area; in mountainous locations, they move to lower elevations for the winter.
hybrids are not common, but are occasionally seen where both species occur in close proximity.

This is great Kym

What a beautiful capture, Kym...the light and detail are fantastic. Nicely done. v/f

How wonderful, Kym... such a beautiful setting... he really does look comfy! l/f

So beautiful and serene...

Beautiful capture! So natural and serene! Stopping by to send a hello and a big smile - I hope this note finds you well! fv :))

Great information.....And these guys were in your backyard? How awesome! I ran across a family one day when I was at a retreat house in the mountains.....happened to look up, froze in my steps....a family of 4, the 2 young ones were more curious about me...Mom and Dad were not too thrilled that the most curious one was NOT obeying them, but eventually he left, but it was a lot of fun to watch! FL

A magic moment captured. I love this and all of your raccoon images, it is perfect!

You have some nice deer captures Kym!! Ruth

This is one great capture and you capture his soulful eyes. I guess he is too young to see those antelopes. L/F

Long time Lingfai! Thanks for your funny comments. You made me laugh tonight!

Beautiful Capture Kym! He looks like he is posing for this picture! FL

Eddie, Thank you for your kind and wonderful remarks as always.. Hope you are well!

Tracy, Thank you for your votes and visits tonight!