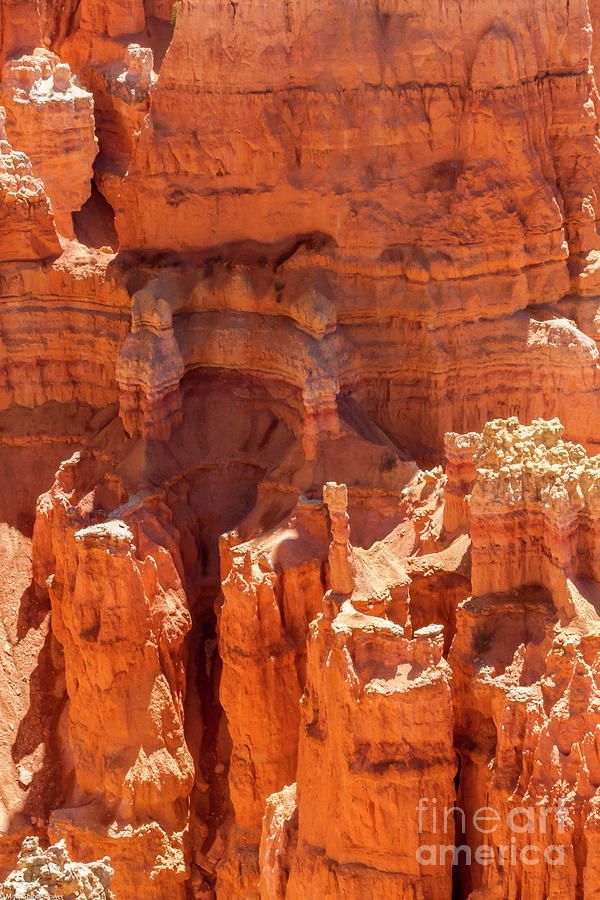 Bryce Canyon National Park lies within the Colorado Plateau geographic province of North America and straddles the southeastern edge of the Paunsaugunt Plateau west of the Paunsaugunt Fault (Paunsaugunt is Paiute for "home of the beaver").[4] Park visitors arrive from the plateau part of the park and look over the plateau's edge toward a valley containing the fault and the Paria River just beyond it (Paria is Paiute for "muddy or elk water"). The edge of the Kaiparowits Plateau bounds the opposite side of the valley.

Bryce Canyon was not formed from erosion initiated from a central stream, meaning it technically is not a canyon. Instead headward erosion has excavated large amphitheater-shaped features in the Cenozoic-aged rocks of the Paunsaugunt Plateau.[4] This erosion exposed delicate and colorful pinnacles called hoodoos that are up to 200 feet (60 m) high. A series of amphitheaters extends more than 20 miles (30 km) north-to-south within the park.[4] The largest is Bryce Amphitheater, which is 12 miles (19 km) long, 3 miles (5 km) wide and 800 feet (240 m) deep.[4] A nearby example of amphitheaters with hoodoos in the same formation but at a higher elevation, is in Cedar Breaks National Monument, which is 25 miles (40 km) to the west on the Markagunt Plateau.[5]

I love the patterns on the rocks! Beautiful colors and light and shot!