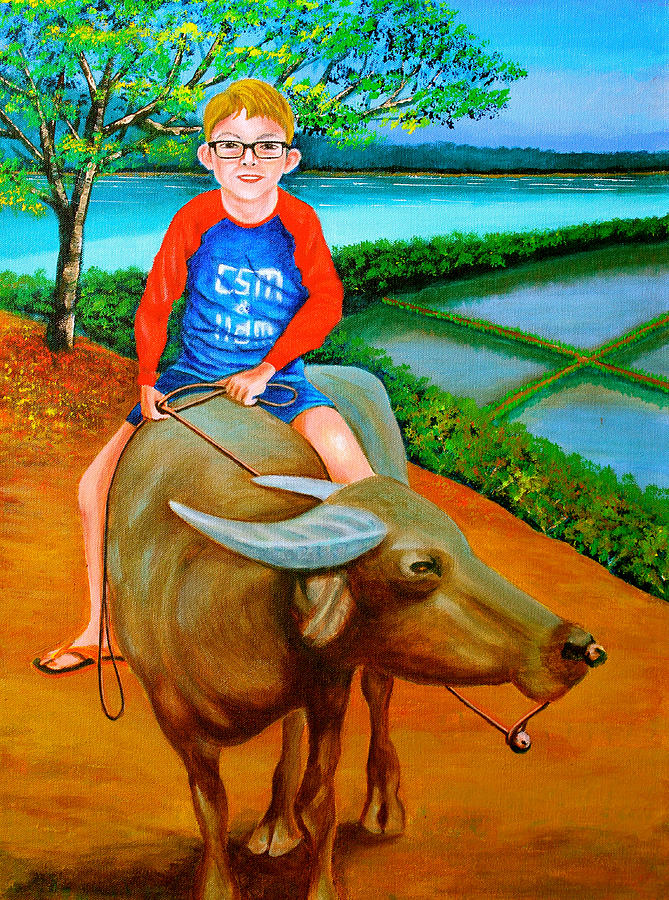 A Caucasian boy named Isaiah, from Texas, went to the Philippines to spend a vacation with his family. He was visiting the Philippines and his relatives there for the first time. He had a wonderful time, playing with his cousins and meeting new friends.

This painting shows Isaiah riding a carabao. He really had a lot of fun back there.

Carabaos are used for farming and for pulling carts in rural villages in the Philippines. They are also a good source of meat, milk, and hide. Carabao hide was once used extensively to create a variety of products, which include the armor of pre-colonial Filipino warriors.

"The carabao is considered a symbol of Guam. In the early 1960s, carabao races were a popular sport in the island, especially during fiestas. Today, carabaos are a part of the popular culture. They are often brought to carnivals or other festivities, and are used as a popular ride for children." (Source: Wikipedia)

Thanks for buying a print of Csm & Lldm painting.

Thanks to the buyer from Serling Heights, MI, for purchasing a print of this painting. We really appreciate your business. Enjoy your print!

Nice story... but I'm going to call BS on the "original" artwork that was clearly jacked from a photo of a Filipino child on a carabao.. The original photo: http://www.bohol.ph/picture16.html

Thank you for the comment, but I don't deny using references in some of my art works. Isaiah is a real Caucasian boy whose father specifically requested us to paint this painting of his adopted son riding a carabao.

Just wonderful! I love the suggestion of a cross in the field also! F/L

Revisiting this fun painting of Isaiah on a carabao - nice job of foreshortening the carabao's body, Cyril! Liked

Beautiful work - so nice to see a boy experiencing life as it was meant to be then! f/v

This looks like it would be a ton of fun to do.

I think so tooâ€¦ Wayne.

Lovely presentation of this ancient animal!.......L.

Beautiful work Cyril, I love it!

I love to see a new artwork from you and Lorna, Cyril! The carabao is very well done and your signatures on the boy's shirt is so clever - liked!

Thank you, Michele… I am glad you like what we did!

Loved the story behind the painting! Excellent work Cyril! f/v

This is so beautiful, well done!

Wonderful capture and depiction of this young visitor and the joy he felt. L

What a delightful story of tho young boy learning about a different culture and having a new experience. Lovely composition. L

Thanks, Lisa. I am glad you like the story.