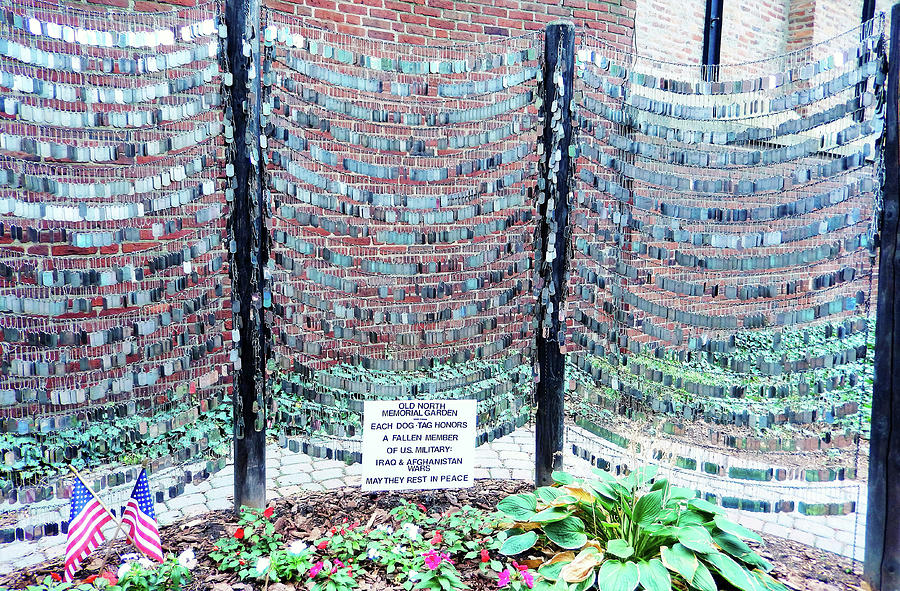 The Old North Church in historic Boston, Massachusetts, in New England, honors its fallen heroes by hanging a dogtag representing a fallen member of the US military in the Iraaq and Afghanistan wars. According to the website, in 2006, Old North Church and its neighbors created the nation’s first public memorial honoring American lives lost during Operation Iraqi Freedom and Operation Enduring Freedom in Afghanistan. Originally, wooden “popcicle stick” crosses and stars of David marked with soldiers’ names were glued to trellaces. With the surge in deaths in 2006 and 2007 and many of the crosses being damaged during the New England winter, a more durable and less labor intensive symbol was sought.
A committee of church members and neighbors conceived a design of blank dog-tags (representing the number of fallen Americans) hung on chains strung between fenceposts. The posts would form a semi-circle with a small garden within the circle, and a walkway and meditation bench along the perimeter.

Ground was broken mid-May of 2007 with the setting of the fence posts and walk way. During the weekend prior to Memorial Day, a table was set up and about 3,500 dog-tags were strung with the assistance of visitors recruited as they walked through the courtyard. On Memorial Day, the Old North Memorial Garden was dedicated. During the reading of native Massachusetts deaths there was a light breeze and the wind chime effect came alive for the first time.

Today, whenever an American falls during the Afghanistan or Iraq/ISIS conflicts, a dog-tag is hung by an Old North Gardener. The tags represent, as close as possible, the total number of deaths (6,884 as of July 4th, 2016).

I am an exhibiting artist in southwest Florida and my art has been exhibited in galleries in Florida, Georgia and North Carolina and is in collections nationwide. I create abstract photography, mixed media photo painting, acrylic mixed media, and acrylic paintings. Many would make great decorati

Thank you so much, Judy, for the feature in USA Photographers ONLY

I was glad we stumbled upon it when we were in Boston a couple years ago.

Very interesting image and love the story you told about it! Captivating!