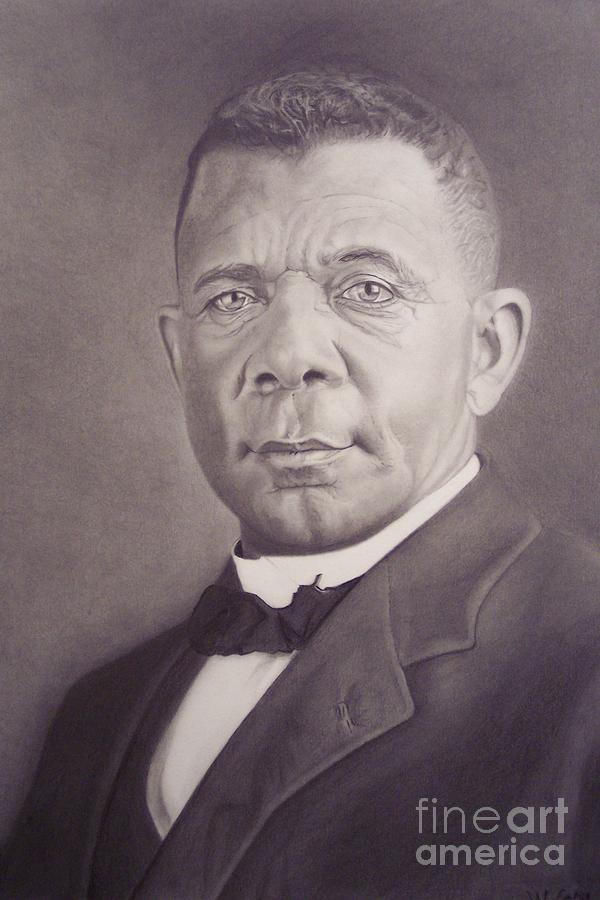 A man before his time...Booker Taliaferro Washington (April 5, 1856 ￿ November 14, 1915) was an African-American educator, author, orator, and advisor to presidents of the United States. Between 1890 and 1915, Washington was the dominant leader in the African-American community.
Washington was of the last generation of black American leaders born into slavery and became the leading voice of the former slaves and their descendants, who were newly oppressed by disfranchisement and the Jim Crow discriminatory laws enacted in the post-Reconstruction Southern states in the late 19th and early 20th centuries. In 1895 his Atlanta compromise called for avoiding confrontation over segregation and instead putting more reliance on long-term educational and economic advancement in the black community.
His base was the Tuskegee Institute, a historically black college in Alabama. As lynchings in the South reached a peak in 1895, Washington gave a speech in Atlanta that made him nationally famous. The speech called for black progress through education and entrepreneurship. His message was that it was not the time to challenge Jim Crow segregation and the disfranchisement of black voters in the South. Washington mobilized a nationwide coalition of middle-class blacks, church leaders, and white philanthropists and politicians, with a long-term goal of building the community's economic strength and pride by a focus on self-help and schooling. Secretly, he supported court challenges to segregation.[1] Black militants in the North, led by W.E.B. Du Bois, at first supported the Atlanta Compromise but after 1909 they set up the NAACP and tried with little success to challenge Washington's political machine for leadership in the black community.[2] Decades after Washington's death in 1915, the Civil Rights movement generally moved away from his policies to take the more militant NAACP approach.
Washington was a dominant figure of the African-American community, then largely based in the South, from 1890 to his death in 1915, especially after his Atlanta Address of 1895. To many he was seen as a popular spokesman for African-American citizens. Representing the last generation of black leaders born into slavery, Washington was generally perceived as a supporter of education for freedmen and their descendants in the post-Reconstruction, Jim Crow-era South. Throughout the final twenty years of his life, he maintained his standing through a nationwide network of supporters including black educators, ministers, editors, and businessmen, especially those who supported his views on social and educational issues for blacks. He also gained access to top national white leaders in politics, philanthropy and education, raised large sums, was consulted on race issues, and was awarded honorary degrees from leading American universities.
The organizers of the new all-black state school called Tuskegee Normal and Industrial Institute in Alabama found the energetic leader they sought in 25-year-old Washington. He believed that with self-help, people could go from poverty to success. The new school opened on July 4, 1881, initially using space in a local church. The next year, Washington purchased a former plantation, which became the permanent site of the campus. Under his direction, his students literally built their own school: making bricks, constructing classrooms, barns and outbuildings; and growing their own crops and raising livestock; both for learning and to provide for most of the basic necessities. Both men and women had to learn trades as well as academics. Washington helped raise funds to establish and operate hundreds of small community schools and institutions of higher educations for blacks. The Tuskegee faculty used all the activities to teach the students basic skills to take back to their mostly rural black communities throughout the South. The main goal was not to produce farmers and tradesmen, but teachers of farming and trades who taught in the new schools and colleges for blacks across the South. The school expanded over the decades, adding programs and departments, to become the present-day Tuskegee University.

The attention to detail and craft is amazing. And you've totally captured this man's strength. Inspired art of an inspiring man.

You and I share an interest in art portraits and biographies. Well done! I look forward to more amazing work.

Thanks Jeff for the nice comment! Your work is good...keep going, keep growing and do what you do...only you can!

Thanks Elarue for the nice comment...I appreciate it! I currently work in Tuskegee which was part of the inspiration for this piece...thanks again!

Absolutely amazing! Wil, your work is magnificent!!! I love it!

What a beautiful portrait. The story is wonderful. As a widow of a Documented Original Tuskegee Airman, I thank you.

What a marvellous portrait, Wil - f/v