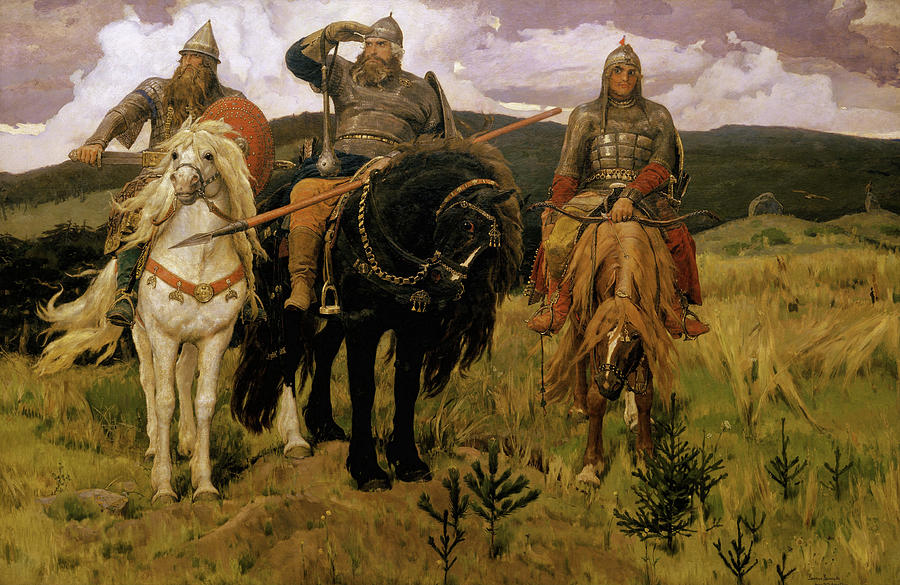 This is a reproduction of Bogatyri, Heroes, by Viktor Mikhailovich Vasnetsov that was finished in 1898. It is the most popular of all Russian paintings and is in the Tretyakov Gallery in Moscow. Vasnetsov was born to a priestly family and in 1867 aged nineteen he graduated seminary and decided to go to Saint Petersburg to study art. He entered the Imperial Academy of Arts and soon joined the Realists in their revolt from the Academy. He won a bronze medal at the London World Fair in 1874 and then spent a year studying art in Paris. Returning to Russia in 1877 he began painting scenes from fairy tales and Russian mythology in Moscow. In the 1880’s he gained greater favor when he turned to religious paintings and icons. He spent five years in Kiev completing controversial frescos in St. Vladimir’s Cathedral and ruing this period he created Bogatyri. He became quite famous and was enobled in 1912 by Nicholas II. He died in 1926. This masterpiece of his is an oil on canvas and measures 295.3 by 446 centimeters.