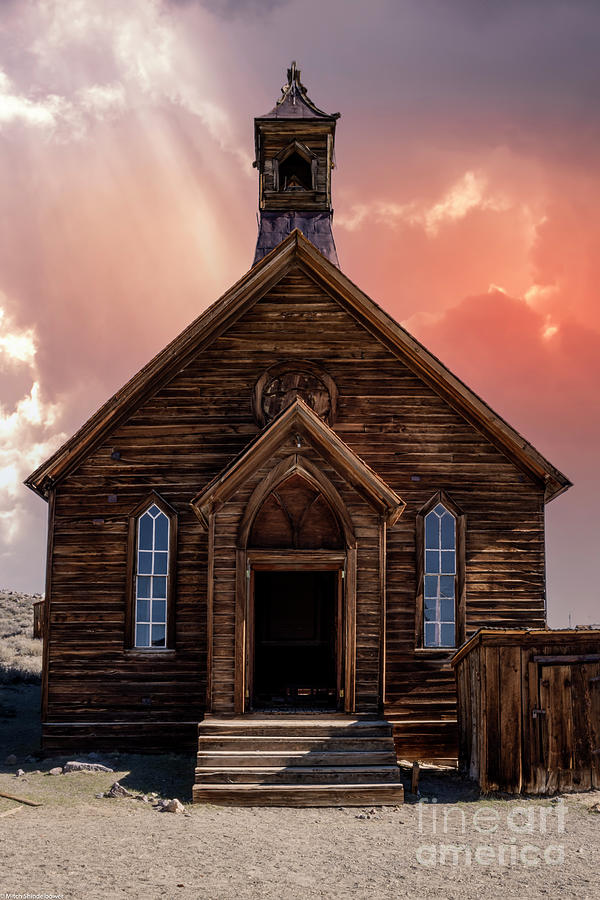 When you first walk into town from the parking lot, the large building on the left is the Methodist Church. The structure was built in 1882 and was one of the two churches in town. There were about 65 saloons. The last standard church service was conducted in 1932, when all but a few families had left Bodie. The small wooden structure to the front-right of the entrance is a wood shed that was added on after the church was originally built.
Between the 1940’s and 1962 (when the State Parks System took over the town) the Methodist Church was vandalized. Among other things, the original oilcloth that had the 10 commandments painted on it was torn down and stolen. Today, there’s a large-size wire-mesh fence blocking the entrance, but there’s plenty of room to easily see inside and take pictures. An old wood burning stove sits in one corner as a remind of how cold Bodie winters were (and are!)
In 1882 Reverend Warrington, who replaced Rev. Hinkle, purchased the lot at the corner of Green Street and Fuller Street, and commenced the building of the Methodist Church. Also in 1882, the Catholic Church was under construction. The Catholic Church was located on the corner of Wood Street and Lowe Street, and was dedicated on September 10th, 1882 – just five days before the first gathering in the Methodist Church on September 15, 1882. Then on Christmas Day, September 25, 1882, the church bell was rung for the first time.

How interesting that this booming town had gone for years with no official church buildings, then two were ready and being used just a week apart from each other. A year earlier, in 1881, the population of Bodie dropped from 7,000-10,000 people to around 3,000.

Mitch, Congratulations on your Feature in WFS Group ! L

Congratulations for having this piece of your artwork from your portfolio chosen to be featured on our homepage of the WFS group. It is worthy of such admiration and I am proud to display your fine art on the homepage of our family of friends and fine artists. Thanks for sharing your talents and beautiful pieces of artwork with our art community.

Beautiful image, Mitch!!! Congratulations, your work is Featured in "Your Best Work"! I invite you to place it in the group's "Featured Image Archive" Discussion!!

Thank you for the feature Taphath!

I love this old church! Beautiful light and shadow and marvelous sky! And I love the sun rays! Beautiful work!