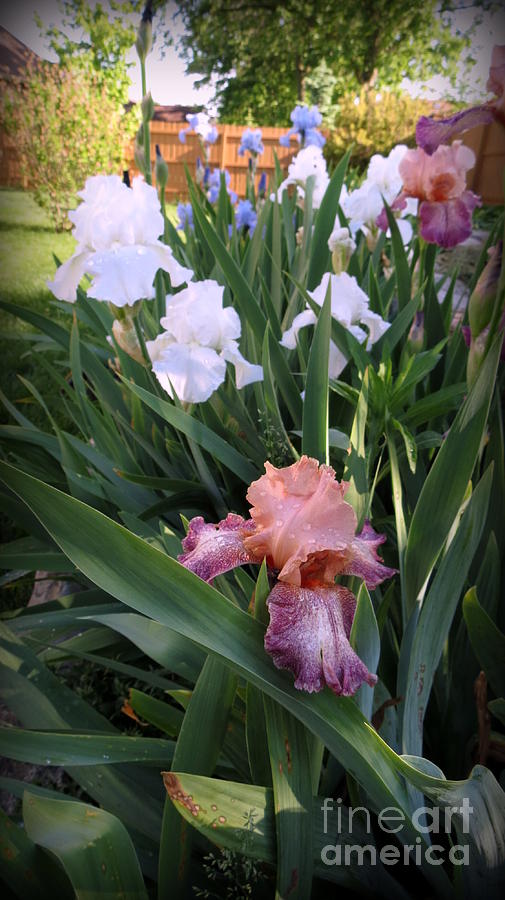 Photograph was taken in my front yard in Kenosha Wisconsin, USA.

The iris's history is rich, dating back to Ancient Greek times when the Greek Goddess Iris, the messenger of the gods and the personification of the rainbow, acted as the link between heaven and earth. Purple irises were planted over the graves of women to summon the Goddess to guide the dead in their journey.
Flower Meanings -

he inflorescences are in the shape of a fan and contain one or more symmetrical six-lobed flowers. These grow on a pedicel or peduncle. The three sepals, which are spreading or droop downwards, are referred to as "falls". They expand from their narrow base, which in some of the rhizomatous irises has a "beard" (a tuft of short upright extensions growing in its midline), into a broader expanded portion ("limb"), often adorned with veining, lines or dots. The three, sometimes reduced, petals stand upright, partly behind the sepal bases. They are called "standards". Some smaller iris species have all six lobes pointing straight outwards, but generally limb and standards differ markedly in appearance. They are united at their base into a floral tube that lies above the ovary (known as an epigynous or inferior ovary). The styles divide towards the apex into petaloid branches; this is significant in pollination.


Iris reichenbachii fruit
The iris flower is of interest as an example of the relation between flowering plants and pollinating insects. The shape of the flower and the position of the pollen-receiving and stigmatic surfaces on the outer petals form a landing-stage for a flying insect, which in probing for nectar, will first come into contact with the perianth, then with the stigmatic stamens in one whorled surface which is borne on an ovary formed of three carpels. The shelf-like transverse projection on the inner whorled underside of the stamens is beneath the overarching style arm below the stigma, so that the insect comes in contact with its pollen-covered surface only after passing the stigma; in backing out of the flower it will come in contact only with the non-receptive lower face of the stigma. Thus, an insect bearing pollen from one flower will, in entering a second, deposit the pollen on the stigma; in backing out of a flower, the pollen which it bears will not be rubbed off on the stigma of the same flower.

The iris fruit is a capsule which opens up in three parts to reveal the numerous seeds within. In some species, these bear an aril.

Congratulations, on your amazing floral image, Featured, in BIRTH MONTH FLOWERS, homepage group, of Fine Art America, for the month, of February!

Thanks so much, Maria!

Thanks so very much, Sorin!

Dan, "Premium FAA Artists", group, thanks so much for the homepage feature!

Thanks so much, Angie.

Thank you, Rose. Much appreciated! Kay

Thanks so very much, I'm honored to be featured in "Gardening Perfection FAA"!