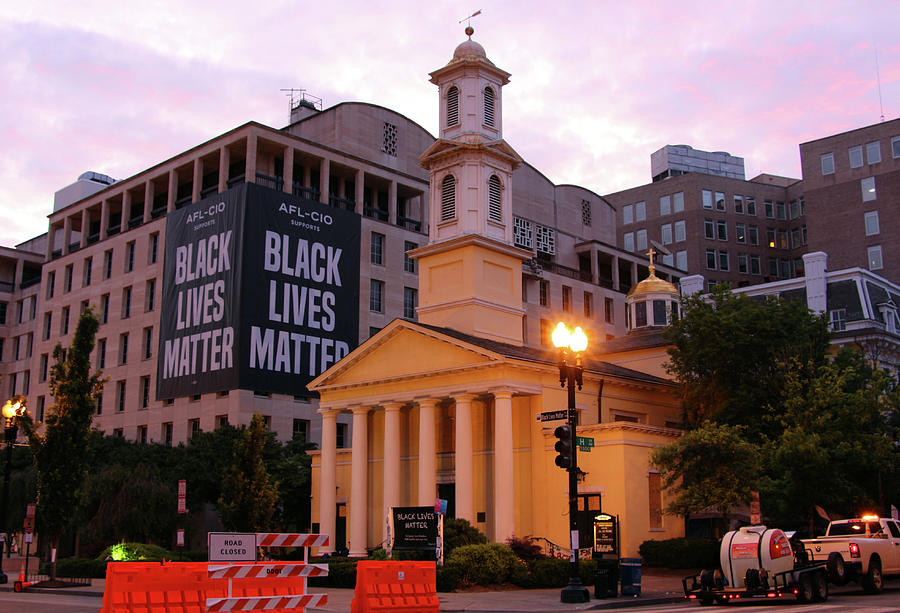 We had a very volatile few weeks here in Washington, DC, especially at Lafayette Square (or park) across the street from the White House. I live a short distance up Connecticut Avenue from Lafayette and it felt like my front yard was under assault, (since many of us living in the city only have cement sidewalks in front of our homes, the local parks are our "front yards").. So heading down to Lafayette Park and visiting the square around it with its historic buildings is nearly a daily activity for me. As a Christian, and someone who enjoys spending quiet time in a church praying and contemplating life, I frequently stop by St. John’s Episcopal Church several afternoons a week and sit peacefully in a relatively empty church and think about what is on my mind that day. The church was built in 1816 and every President of the United States since its establishment has attended services there, some on a regular basis. There are other historic buildings at Lafayette Square (the “Square” is the immediate neighborhood surrounding the “Park”). A favorite of mine is Dolley Madison’s house, which she lived in with her husband, President James Madison, until his death in 1836, and then she remained there until dying in 1849. Another favorite historic building is Decatur House, considered the first private residence in Washington, and was for many years a boarding house where prominent members of Congress and even a future president, Martin Van Buren, resided. But St. John’s is my favorite, and it shook me to my core to watch Donald Trump’s blasphemous behavior in front of this church whilst holding a Bible upside down and smirking as if he were the Devil himself. Thank you, God, for delivering the church back to us, for removing the fence that had been hastily put up around the park as Trump cowered in a nearby underground bunker, and for giving us a nation full of people that have showed up in great numbers, from my “front yard” to hundreds of cities great and small across the country, all fighting for the basic need of fairness and equality for all, a right that is not just for white men of privilege like Donald Trump.

This photograph was taken early in the morning of June 15, 2020, two weeks to the day after protestors were violently cleared from the street by the United States government so Trump could have a photo-op in front of the cherished church. To Trump, the church was a political prop, but to most of us the church is a sacred place, and Trump’s actions were blasphemous.