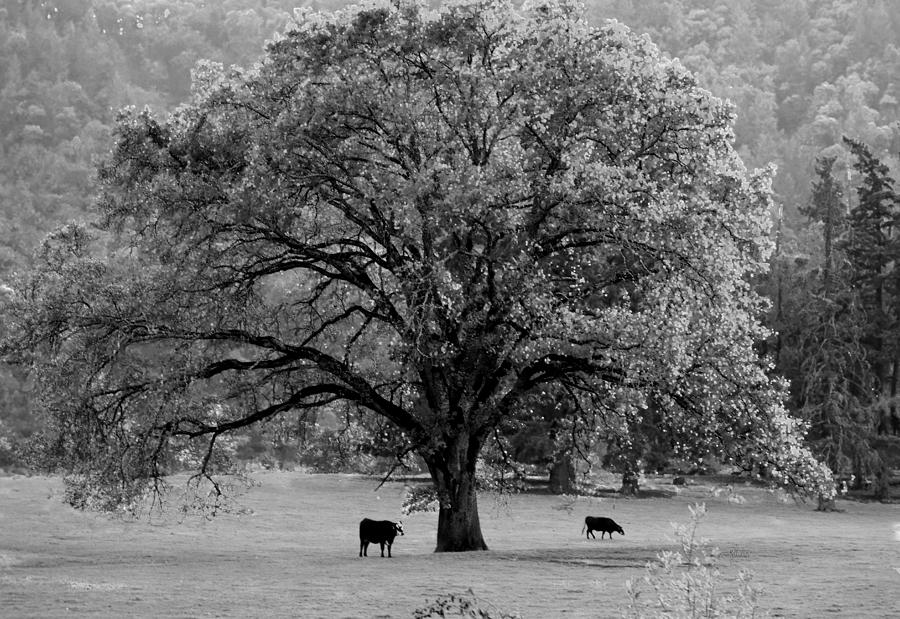 Black and White Tree with two cows by Michele Avanti

This image is also available in full color.

One of the most beautiful creations on planet earth are the trees. Each unique in its stature and structure. Those that are given space, soil and water, will extend their arms as far as they can reach and grace the landscape with their magnificent presence. This tree is certainly one of them. Here at the far south end of the Willamette Valley in Oregon, it shades angus, hereford mix cows. As the seasons change so does this wonderful tree. Here it is seen in early Fall beginning to turn colors. Even in black and white you can tell the leaves are changing color.

In botany, a tree is a perennial plant with an elongated stem, or trunk, supporting branches and leaves in most species. In some usages, the definition of a tree may be narrower, including only woody plants with secondary growth, plants that are usable as lumber or plants above a specified height. In looser senses, the taller palms, the tree ferns, bananas and bamboos are also trees. Trees tend to be long-lived, some reaching several thousand years old. The tallest known tree, named Hyperion, is 115.6 m (379 ft). Trees have been in existence on the Earth for 370 million years. Trees are not a taxonomic group but include a variety of plant species that have independently evolved a woody trunk and branches as a way to tower above other plants to compete for sunlight.

A tree typically has many secondary branches supported clear of the ground by the trunk. This trunk typically contains woody tissue for strength, and vascular tissue to carry materials from one part of the tree to another. For most trees it is surrounded by a layer of bark which serves as a protective barrier. Below the ground, the roots branch and spread out widely; they serve to anchor the tree and extract moisture and nutrients from the soil. Above ground, the branches divide into smaller branches and shoots. The shoots typically bear leaves, which capture light energy and convert it into sugars by photosynthesis, providing the food for the tree's growth and development. Flowers and fruit may also be present, but some trees, such as conifers, instead have pollen cones and seed cones; others, such as tree ferns, produce spores instead.
Trees play a significant role in reducing erosion and moderating the climate. They remove carbon dioxide from the atmosphere and store large quantities of carbon in their tissues. Trees and forests provide a habitat for many species of animals and plants. Tropical rainforests are one of the most biodiverse habitats in the world. Trees provide shade and shelter, timber for construction, fuel for cooking and heating, and fruit for food as well as having many other uses. In parts of the world, forests are shrinking as trees are cleared to increase the amount of land available for agriculture. Because of their longevity and usefulness, trees have always been revered and they play a role in many of the world's mythologies.

very nice black and white Michele! I like it!

What a magnificent tree and beautiful photograph; I love the two cows as well!

Revisit to Pay It Forward in Appreciating Works!

Great perspective and story telling with the animals, Michele.

Love the tree here Michele! The cows are a pleasant accent too.

Thank you, John! You are the best!!

Very lovely photo Michele, I love black and white as much as I love color!!! L/F

Wow! You get up really early.. I go to bed between 2 and 6 am, so we meet despite our time differences.. amazing. I do hope you give time to yourself, it is the act of an angel to be a caregiver and one must remain centered in love to find joy inside. I pray you take good care of yourself, as I am certain you do for your mom. xxxooo

Loved in full color, love in black and white. Black and white images are so crisp allowing me to concentrate on that perfect tree!

Karen, what time do you get up? I have not been to bed yet and I thought I was getting in early tonight...lol.. hope your day is awesome.. hugs..Thank you so much for stopping by!