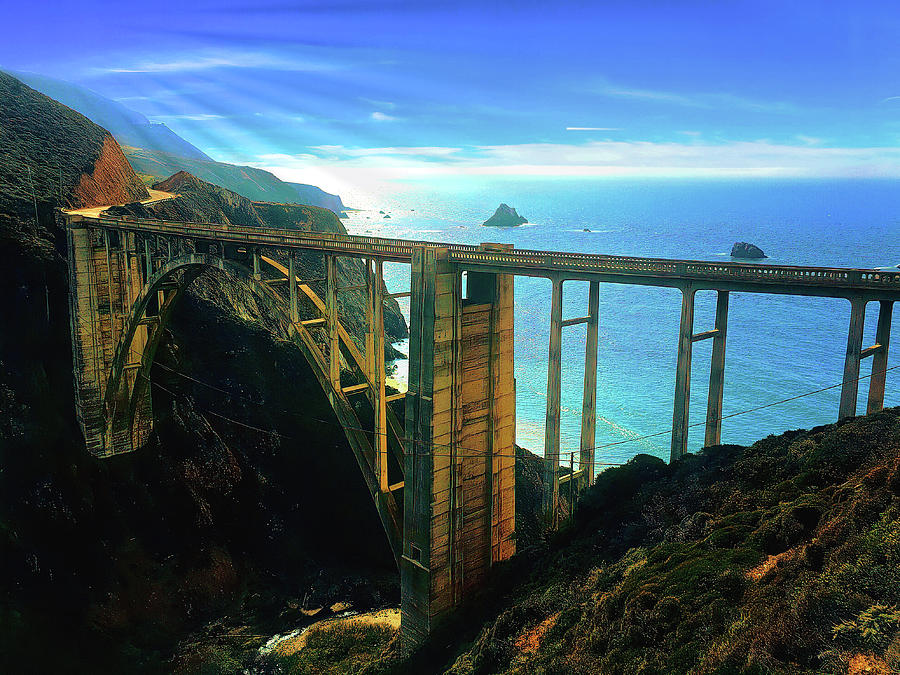 Bixby Bridge Big SurBixby Creek Bridge, also known as Bixby Canyon Bridge, on the Big Sur coast of California, is one of the most photographed bridges in California due to its aesthetic design, "graceful architecture and magnificent setting". It is a reinforced concrete open-spandrel arch bridge. The bridge is 120 miles south of San Francisco and 13 miles south of Carmel in Monterey County along State Route 1. Before the opening of the bridge in 1932, residents of the Big Sur area were virtually cut off during winter due to blockages on the often impassable Old Coast Road, which led 11 miles (18 km) inland. The bridge was built under budget for $199,861 (equivalent to $3.07 million in 2018 dollars) and, at 360 feet (110 m), was the longest concrete arch span on the California State Highway System. It is one of the tallest single-span concrete bridges in the world. The land north and south of the bridge was privately owned until 1988 and 2001. A logging company obtained approval to harvest redwood on the former Bixby Ranch to the north in 1986, and in 2000 a developer obtained approval to subdivide the former Brazil Ranch to the south. Local residents and conservationists fought their plans, and both pieces of land were eventually acquired by local and federal government agencies. After a $20 million seismic retrofit completed in 1996, the bridge remains functionally obsolete. Its 24-foot (7.3 m) width does not meet modern standards requiring bridges to be 32 feet (9.8 m) wide.

Thanks so much Heidi! Aloha!

Your artwork has been featured on the homepage of FAA Gallery Home For All Artists Who Create. PLease post your amazing artwork in our` Archive your July Features` discussion.

Thanks very much, John!

Congratulations on being featured in the FAA Group 'Off the Beaten Path.' To ensure your feature remains available over time, post your featured image(s) in the Group's 'Thanks for the Feature / Image Archive.’ l/f. If you allow pinning, your image will be pinned to the Group’s features board (www.pinterest.ca/tendrelimages/off-the-beaten-path/)

Thanks very much Murray!