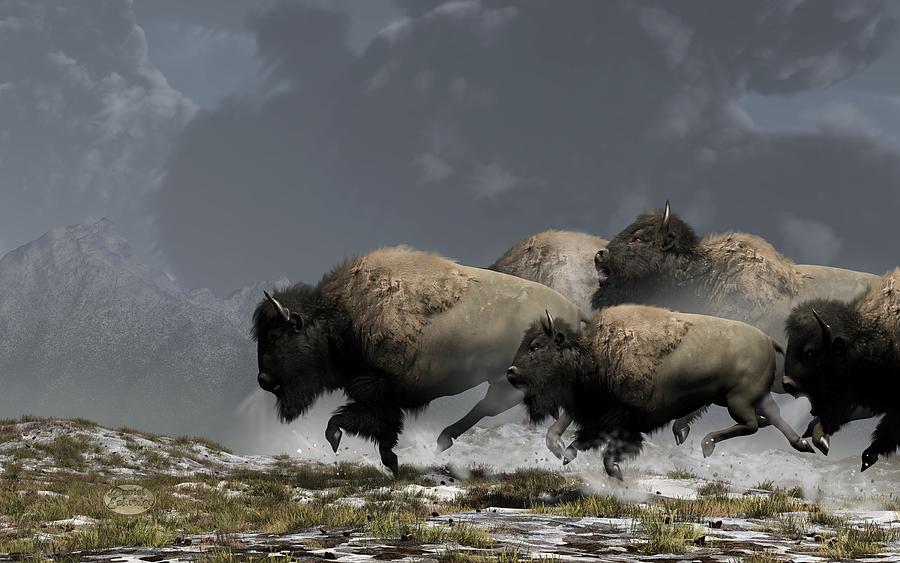 Here is my attempt at some American West themed art. As the last of the Pleistocene megafauna, I think that the American bison is one of the coolest creatures on earth. Plus, their habitat makes for some really fantastic landscapes.

I always liked western art, that is, specifically, art of the American Wild West. I see it as the American take on 19th century romanticism. As a kid, I was first exposed to it when I got a book full of N.C. Wyeth prints. Though he mostly did illustrations of classic novels, there was a section on western images, and I found their rugged landscapes and energetic subjects fascinating. Later on, I lived in Texas for a year where I learned of other western artists, such as Fredrick Remington. I particularly like how western art continued along through the 20th century and ran counter to the abstract expressionist and similar movements of the time. Not that I don�t also like abstract expressionism, I guess I just admired western art's rebelliousness against the more pervasive modernist movements.

I'm so stunned at your beautiful images, Daniel! This is so sharp and crystal clear!

Spectacular animal composition, lighting, shading, colors and artwork! F/L voted for this piece in the contest YOUR BEST ANIMALS WORK

Love this dramatic and exciting work of art, Daniel!!! Congratulations on your sale!!

Excellent work of art this is! L/F

Congratulations on your sale, Daniel! Great capture of the buffalo herd! L/f

"Art consists of limitation. The most beautiful part of every picture is the frame." .... Congratulations on your recent sale of a wonderful work.

Congratulations on your tie for 1st place in the Wild Animal contest! l/f

Fantastic! You are amazing with what you can do digitally! Congats on your win in the WILD ANIMALS contest. l/f

Many Thanks to they buyer from CO!

Your attempt?!?!? I would say you have mastered it! Powerful image. Lovely work of art. Well done! FAVORITE!

Your art is remarkable, Daniel!!!! I absolutely LOVE this. Some of my favorite colors, in this artwork, too! :-) l/f

Impressive catch of one of the legends of the west, and a part of the american national identity. There is some tremendous strenght emeanating from this outstanding image ! LF!

You work is fantastic. I had to take the time and comment on your American Bison, these animals are really wonderful and iconic. YOU make them even more fantastic with your art.. I can feel the rumble under my feet, and feel the dust hit my nose.. You have a wonderful gallery Daniel. I voted for many of your images in contests, and here too... Lovely work... LF

I think I can actually hear them coming :) fabulous work f/l/t

Fantastic work of art, Daniel. I think I can hear the thunder of hoofs from where I sit! f/l

Awesome....Congrats on your sale, Daniel.

Many thanks to the buyer in Sioux Falls!

Fabulous sensation of movement and danger, Daniel .. this is magnificent!!! l/f