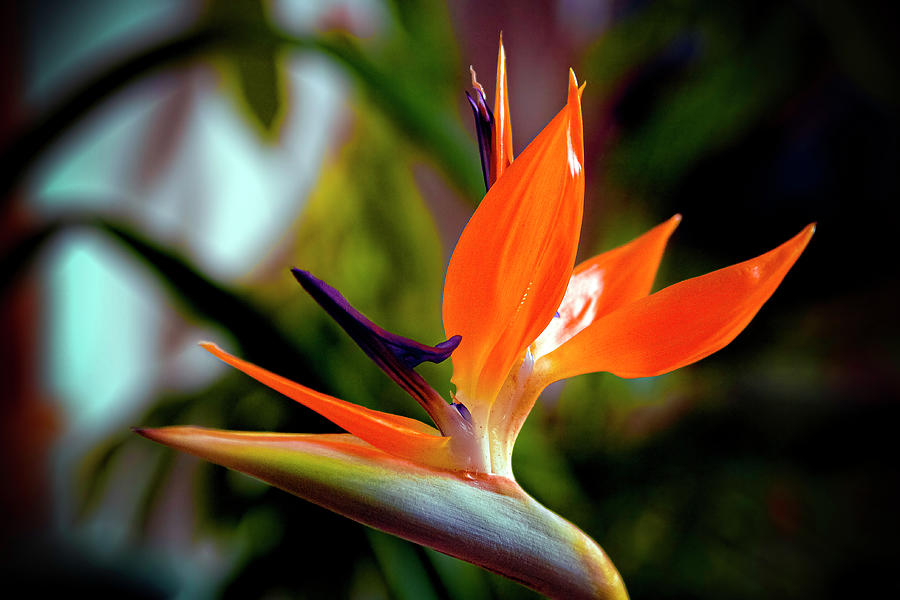 Strelitzia /str?'l?tsi?/[1] is a genus of five species of perennial plants, native to South Africa. It belongs to the plant family Strelitziaceae.[2] The genus is named after the duchy of Mecklenburg-Strelitz, birthplace of Queen Charlotte of the United Kingdom. A common name of the genus is bird of paradise flower / plant, because of a resemblance of its flowers to birds-of-paradise. In South Africa it is commonly known as a crane flower and is featured on the reverse of the 50 cent coin. It is the floral emblem of the City of Los Angeles; two of the species, Strelitzia nicolai and Strelitzia reginae, are frequently grown as house plants.[3]

The species S. nicolai is the largest in the genus, reaching 10 m tall, with stately white and blue flowers;[4] the other species typically reach 2 to 3.5 m tall, except S. caudata which is a tree of a typically smaller size than S. nicolai. The leaves are large, 30–200 cm long and 10–80 cm broad, similar to a banana leaf in appearance but with a longer petiole, and arranged strictly in two ranks to form a fan-like crown of evergreen foliage. The flowers are produced in a horizontal inflorescence emerging from a stout spathe.

Thank you so much Carol for the lovely comment and the lf!! :)

Congratulations, for the Homepage Feature, in the Art Group, "FOR THE LOVE OF FLOWERS" for Monday, 12/14/2020! You are welcome to submit your featured artwork in the Group's discussion thread “2020 Thanks and Features Archive December." Thank you for sharing your unique flower photography and being a member of the group. like/fave

Thank you for the Homepage Feature, in the Art Group, "FOR THE LOVE OF FLOWERS" and fav Janet!!