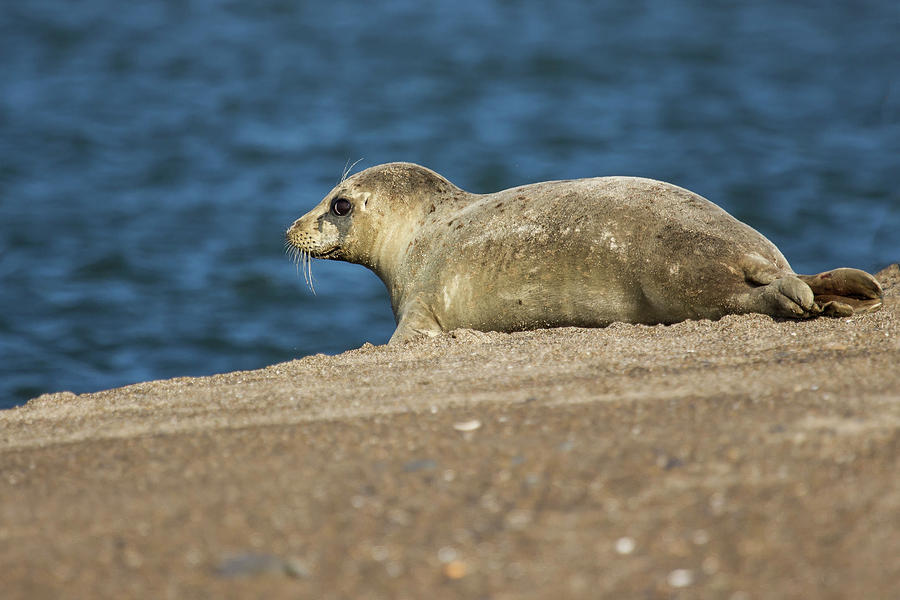 A harbor seal baby on a sand bar near Lincoln City on the central Oregon coast. Pacific harbor seals (Phoca vitulina) are the most commonly seen pinniped (fin-footed animal) on the Oregon coast. They haul-out (rest) at low tide on sand bars in most bays and estuaries along the Oregon coast. They are also found on nearshore rocks and islands usually within 3 miles of the coast. Harbor seals have a gray or black spotted coat. The males and females are approximately the same size: about 5 to 6 feet in length and between 200 and 300 pounds when full grown. In Oregon, pups are born in late March through April. Pups weigh about 10 pounds and they can swim at birth.

Thanks, Mariola, for the feature of 'Big Eyed Baby' in 'Wildlife ONE A DAY' ... greatly appreciated :-)

Congrats on over 500 views!

Such a sweet face and wonderful capture! l/f

What a gorgeous shot of this handsome fellow blending so beautifully with the sand....L/F

Perfect timing and shot and great detail !! So sweet as well !! l/f

Congratulations on your feature in the "Seashells and the Seashore" group. Beautiful capture!

Thank you for featuring 'Big Eyed Baby' in 'Seashells and the Seashore', Jennifer .. I appreciate the support :-)

Thank you, Dianne, for the feature of 'Big Eyed Baby' in 'Scenes From A Beach' ... greatly appreciated :-)

Thank you for featuring 'Big Eyed Baby' in 'Animal Photographs', Doug .. I appreciate the support :-)