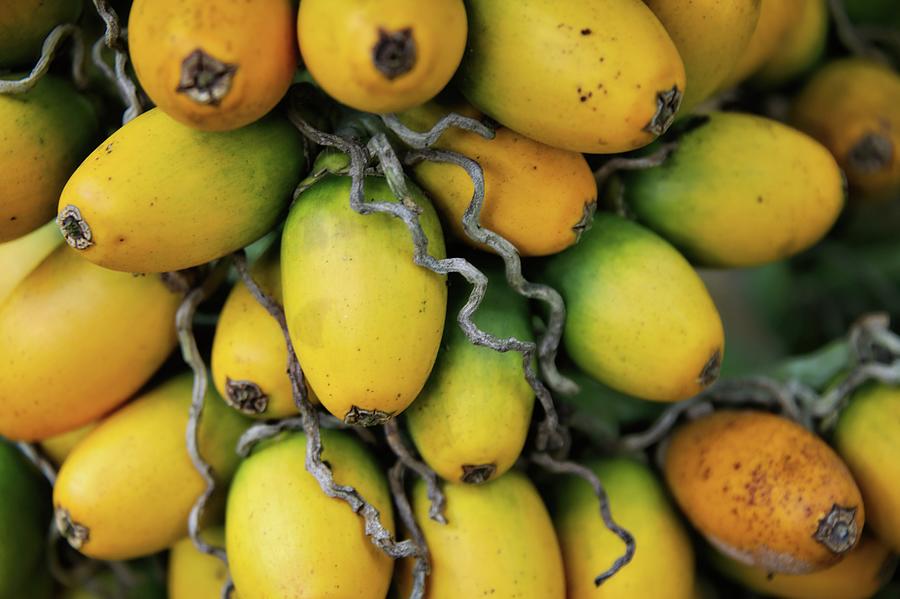 These are the fruit of the dwarf Betel Palm. My neighbor has a grove of them on his property, but does not sell them. The palms were planted over 30 years ago when they were actively grown and sold in Hawai'i. Betel palms are native to Southeast Asia. Betel nuts, at the center of the bright yellow and orange fruit, have been chewed for centuries by the peoples of the Pacific Islands. Betel nut has a long history in South and Southeast Asia and the Pacific Basin. In Guam and other Pacific islands, its use can be traced back as far as 2,000 years. A habit passed down through generations, chewing betel nut is a time-honored custom for 10–20 percent of the world’s population. Today, the World Health Organization (WHO) estimates that around 600 million people use some form of betel nut. It is one of the most popular psychoactive substances in the world, in fourth place after nicotine, alcohol, and caffeine. Like the use of caffeine, betel nuts are chewed to give renewed energy. When chewed habitually, the teeth of people are stained bright red or purple. Teeth can also be destroyed as they are traditionally prepared with lime, which erodes teeth enamel.

Thank you very much Cindy. Aloha

Many thanks Joaquin! Aloha