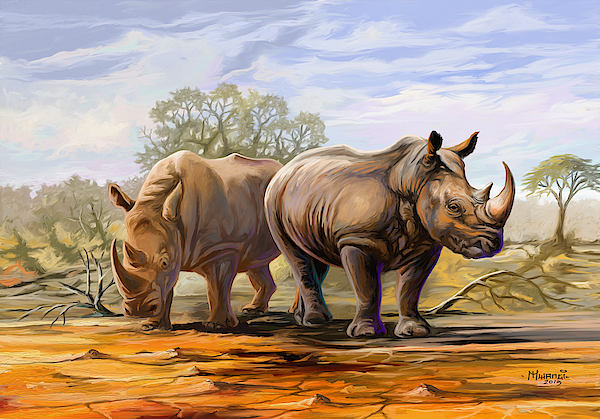 The Africa Rhino for some strange reason reminds me of Triceratops, a long gone creature from the era of the Dinosaurs. Triceratops is a genus of herbivorous ceratopsid dinosaur that first appeared during the late Maastrichtian stage of the late Cretaceous period, about 68 million years ago in what is now North America.

Well, the Triceratops are gone, but the Rhinos are here. If only we are keen to preserve these animals today, we don’t have to see them get extinct in the near future. The African Rhinos, the modern day Triceratops. Long live the RHINO!

Fantastic work of art... I love this Anthony. Your use of color and light are breathtaking.

Magnificent depiction of these endangered animals.

So masterful, this truly honors the magnificent animals F/L

Thanks Scull. I do appreciate

Well done, I really like the way you applied the foreground colors to the Rhinos. I can feel the intense heat and the sky is perfect.

Congratulations on your feature in Animal Painting

Thanks for the Feature Lori.

So beautiful and well done.

The balance between the Rhinos' bold presence and the subtle delicacy of the trees makes for a fascinating scene, Anthony.

I appreciate Joel. Your comments are always very illustrious and thoughtful