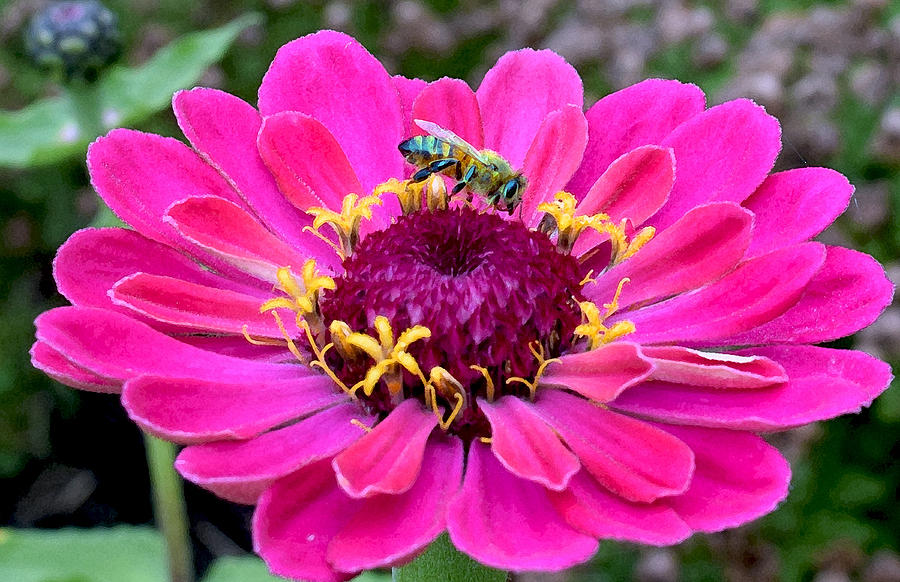 The primary purpose of a flower is reproduction. Since the flowers are the reproductive organs of plant, they mediate the joining of the sperm, contained within pollen, to the ovules � contained in the ovary. Pollination is the movement of pollen from the anthers to the stigma. The joining of the sperm to the ovules is called fertilization. Normally pollen is moved from one plant to another, but many plants are able to self pollinate. The fertilized ovules produce seeds that are the next generation. Sexual reproduction produces genetically unique offspring, allowing for adaptation. Flowers have specific designs which encourages the transfer of pollen from one plant to another of the same species. Many plants are dependent upon external factors for pollination, including: wind and animals, and especially insects. Even large animals such as birds, bats, and pygmy possums can be employed. The period of time during which this process can take place (the flower is fully expanded and functional) is called anthesis. The study of pollination by insects is called anthecology.

Pollen
The types of pollen that most commonly cause allergic reactions are produced by the plain-looking plants (trees, grasses, and weeds) that do not have showy flowers. These plants make small, light, dry pollen grains that are custom-made for wind transport.

The type of allergens in the pollen is the main factor that determines whether the pollen is likely to cause hay fever. For example, pine tree pollen is produced in large amounts by a common tree, which would make it a good candidate for causing allergy. It is, however, a relatively rare cause of allergy because the types of allergens in pine pollen appear to make it less allergenic.

Among North American plants, weeds are the most prolific producers of allergenic pollen.[19] Ragweed is the major culprit, but other important sources are sagebrush, redroot pigweed, lamb�s quarters, Russian thistle (tumbleweed), and English plantain.

There is much confusion about the role of flowers in allergies. For example the showy and entomophilous goldenrod (Solidago) is frequently blamed for respiratory allergies, of which it is innocent, since its pollen cannot be airborne. Instead the allergen is usually the pollen of the contemporary bloom of anemophilous ragweed (Ambrosia), which can drift for many kilometers.
Scientists have collected samples of ragweed pollen 400 miles out at sea and 2 miles high in the air.[18] A single ragweed plant can generate a million grains of pollen per day.

It is common to hear people say they are allergic to colorful or scented flowers like roses. In fact, only florists, gardeners, and others who have prolonged, close contact with flowers are likely to be sensitive to pollen from these plants. Most people have little contact with the large, heavy, waxy pollen grains of such flowering plants because this type of pollen is not carried by wind but by insects such as butterflies and bees.

Bees are flying insects closely related to wasps and ants, and are known for their role in pollination and for producing honey and beeswax. Bees are a monophyletic lineage within the superfamily Apoidea, presently considered as a clade Anthophila. There are nearly 20,000 known species of bees in seven to nine recognized families,[1] though many are undescribed and the actual number is probably higher. They are found on every continent except Antarctica, in every habitat on the planet that contains insect-pollinated flowering plants.

Bees are adapted for feeding on nectar and pollen, the former primarily as an energy source and the latter primarily for protein and other nutrients. Most pollen is used as food for larvae.
Bees have a long proboscis (a complex "tongue") that enables them to obtain the nectar from flowers. They have antennae almost universally made up of 13 segments in males and 12 in females, as is typical for the superfamily. Bees all have two pairs of wings, the hind pair being the smaller of the two; in a very few species, one sex or caste has relatively short wings that make flight difficult or impossible, but none are wingless.
Tiny bee stingless bee species exist whose workers are less than 2 mm (0.079 in) long.[2] The largest bee in the world is Megachile pluto, a leafcutter bee whose females can attain a length of 39 mm (1.5"). Members of the family Halictidae, or sweat bees, are the most common type of bee in the Northern Hemisphere, though they are small and often mistaken for wasps or flies.
The best-known bee species is the European honey bee, which, as its name suggests, produces honey, as do a few other types of bee. Human management of this species is known as beekeeping or apiculture.
Bees are the favorite meal of Merops apiaster, the bee-eater bird. Other common predators are kingbirds, mockingbirds, beewolves, and dragonflies.

The earliest animal-pollinated flowers were pollinated by insects such as beetles, so the syndrome of insect pollination was well established before bees first appeared. The novelty is that bees are specialized as pollination agents, with behavioral and physical modifications that specifically enhance pollination, and are generally more efficient at the task than any other pollinating insect such as beetles, flies, butterflies and pollen wasps. The appearance of such floral specialists is believed to have driven the adaptive radiation of the angiosperms, and, in turn, the bees themselves.
Among living bee groups, the "short-tongued" bee family Colletidae has traditionally been considered the most "primitive", and sister taxon to the remainder of the bees. In the 21st century, however, some researchers have claimed that the Dasypodaidae is the basal group, the short, wasp-like mouthparts of colletids being the result of convergent evolution, rather than indicative of a plesiomorphic condition.[1] This subject is still under debate, and the phylogenetic relationships among bee families are poorly understood.

Such a beautiful capture, the bee is wonderful! L/F

When using a short lens it is a challenge to get close enough and not disturb the bee, but this bee must have understood. TY so much for visiting.. wish we could share tea.