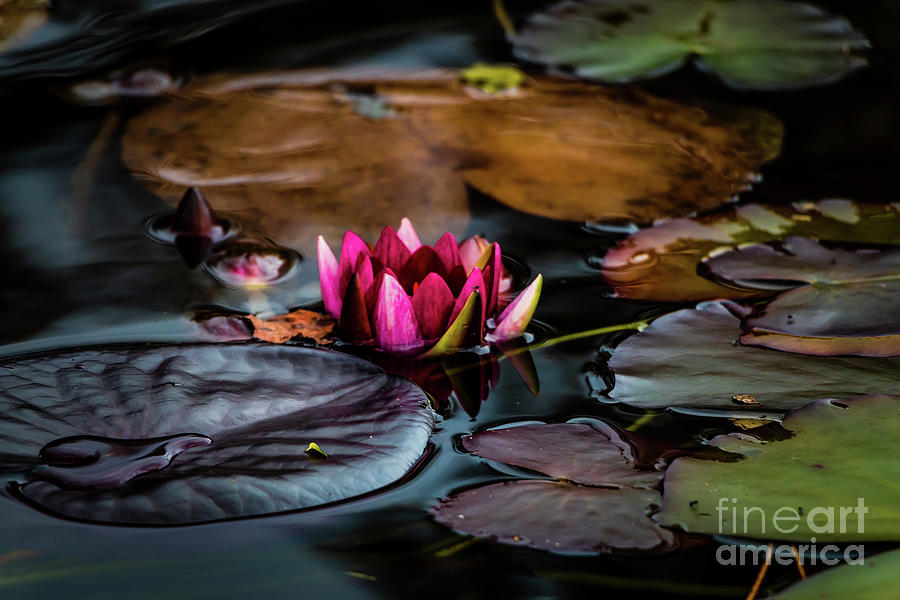 The water lily has always been a favorite flowers of mine. When taking photographs of flowers, I always wonder what the symbol or meaning of the flower that I am capturing. The water lily symbolizes beauty, creation, purity, and enlightenment. It is the official flower of Bangladesh. "The scientific name of this flower is "Nymphaea". It comes from a Greek word "nymph", and according to the Greek mythology, it means a feminine spirit that inhabited water bodies like wells, waterways, and spring. In ancient Egypt, this flower depicted the unity of people in the country. The lily (symbol of Upper Egypt) was teamed with the papyrus flower, which was symbolic of Lower Egypt. It was used to denote a united country. Ancient Egyptians also had a high regard for the blue water lily, which they regarded as a representation of the Sun and a symbol of rebirth. Coming to the Asian continent, the water lily has a completely different symbolism. Since it produces blossoms and fruits simultaneously, it represents universality. In the context of religion, it is considered to be sacred by the Buddhists and the Hindus. According to Buddhism, enlightenment is associated with this blossom. Different colored water lilies have different representations according to the ancient Buddhists, and the practice is still carried out. For instance, a red lily connotes love and passion, and is considered to be the lotus of the heart. The iconography of the purple lily is mystic power, while the white lily is mental purity. The highest deity is represented with a pink lily, and blue lilies are associated with knowledge.In the spiritual arena of Hinduism, the concept of resurrection is symbolically denoted by the water lily. This is because at night (or during darkness), the lilies close their blossoms and with the first ray of the sun, they open. It is also a symbol of purity, because even though the plant grows in mud, the flower is pure and free from blemishes. " (Found at: https://gardenerdy.com/what-does-water-lily-symbolize)

I found this amazing water lily at Dunvegan Castle on Skye in Scotland. Their private gardens were simply amazing. Seeing this water lily in person was thrilling. I love the dark shadows and the detail of the leaves and water current flowing through the pond. Definitely one of my favorite flowers and one of my favorite photographs!

Love the colors and the pop

Thank you so much to the dear friend who purchased a package of 10 greeting cards. I am so grateful.

So beautiful, I love the purple leaves too! F/L

Wow, indeed that is beautiful, Liz...great find and capture! L/F