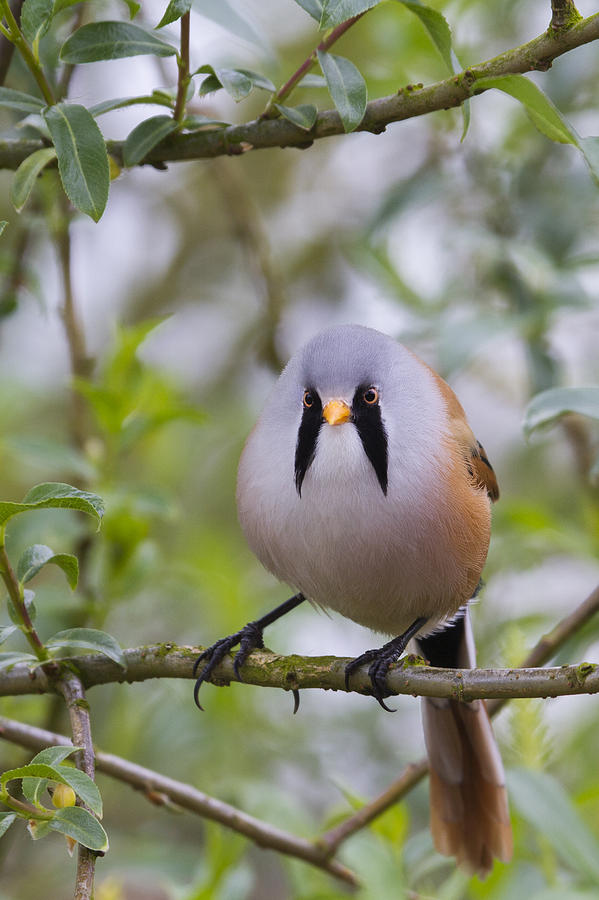 Bearded Tit ( Panurus biarmicus ) close up in the wild.
This is a small orange-brown bird with a long tail and an undulating flight. The male has a grey head and black moustaches (not a beard). Flocks often betray their presence in a reedbed by their characteristic "ping" call. This species is a wetland specialist, breeding colonially in large reed beds by lakes or swamps. It eats reed aphids in summer, and reed seeds in winter, its digestive system changing to cope with the very different seasonal diets.

The bearded reedling is a species of temperate Europe and Asia. It is resident, and most birds do not migrate other than eruptive or cold weather movements. It is vulnerable to hard winters, which may kill many birds. The English population of about 500 pairs is largely confined to the south and east with a small population in Leighton Moss in north Lancashire. In Ireland a handful of pairs breed in County Wexford. The largest single population in Great Britain is to be found in the reedbeds at the mouth of the River Tay in Perth and Kinross, Scotland, where there may be in excess of 250 pairs.
The bearded reedling was placed with the parrotbills in the family Paradoxornithidae, after they were removed from the true tits in the family Paridae. However, according to more recent research, it is actually a unique songbird - no other living species seems to be particularly closely related to it[citation needed]. Thus, it seems that the monotypic family Panuridae must again be recognized.

What a very interesting looking bird! Congratulations on your Feature in Wings! L

Thank you Sharon for featuring my image in Birds of the World.

Thank you Ludwig for featuring my image in Cafe Art.

Thank you Jay for featuring my image in Amateur Photographers.

Thank you Mariola for featuring my image in Wildlife ONE A DAY.

Thank you Joe for featuring my image in Wings.