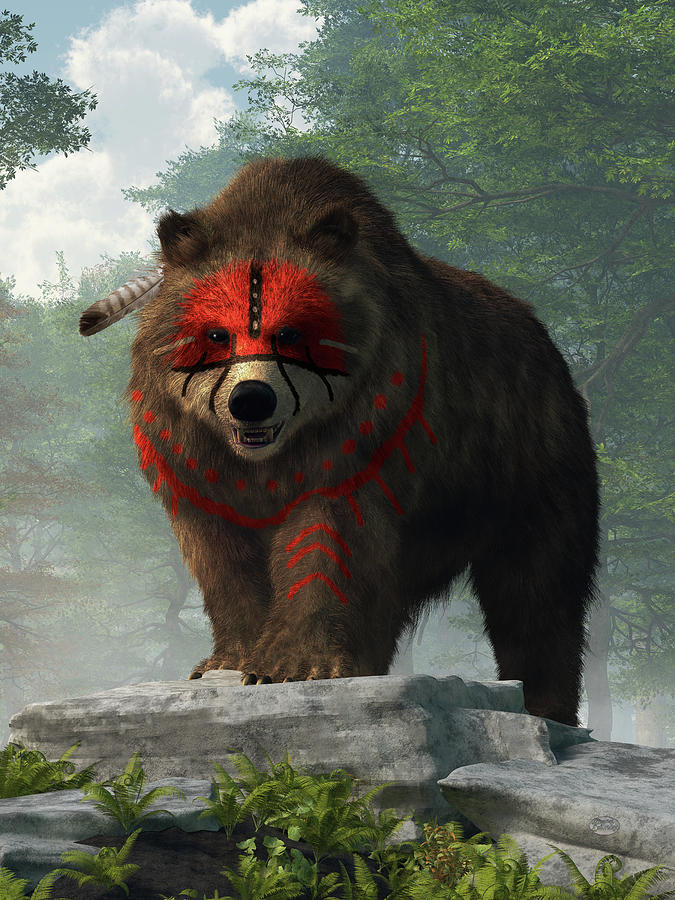 A village was being terrorized by a monster that inhabited the forest nearby.  One of the young warriors decided he would face the monster alone.  He put on war paint and eagle feather, grabbed his spear, and started off into the forest.

On the first day, it rained a lot.  He spent most of the day sheltering under a tree.  Because of this, he did not find the monster that day.

On the second day, he came to a river that ran through a valley in the forest.  Because of the rain on the previous day, the water roared with big rapids. He searched for a way to cross the river.

Soon he heard a cry of distress.  He look and saw a small bear cub that had fallen in the river and was struggling in the savage waters.  At first, the warrior was going to let the bear cub drown, for people and bears usually did not get along.  Something in his heart changed though, and, finding a large fallen tree branch, he rescued the cub.  The little bear cub scampered off in to the trees without even a look back at  the warrior.  Little did the warrior know, but Grandfather Bear watched from a nearby cliff and saw what he had done.

The warrior continued to hunt the monster.  He still could find no way across, so he decided to follow the river upstream.  At the the head of the valley, there was a waterfall.  Here he encountered the monster.

The beast was bigger and stronger than he had anticipated.  When he thrust his spear at it, the monster simply snatched it away and snapped it like a twit. Then with its huge arm, it struck the warrior and sent him into the river.

Unable to fight the current, he was carried far downstream.  The warrior was sure he would drown, but he did not.  He was pulled from the river by Grandfather Bear and put by a tree to recover.

"The monster is too strong for you," said Grandfather Bear.  "You should go home."

"I cannot," replied the warrior. "It is terrorizing my village, and I must kill it."

"That would work as well," agreed the warrior.

"Then, sleep here tonight, and, when you wake, go to face the monster again.  Suddenly, Grandfather Bear, swiped his paw down the warriors face.

The warrior cried in pain.  "Why did you do that?" he shouted as he felt four deep scratches  from the bear's claws running down his face, but Grandfather Bear was gone.

Despite the scratches on his face, the warrior slept.  When he awoke, he itched all over.  Looking down he saw that he was covered in thick brown fur.  He had become a bear.  He felt that he was now much bigger and stronger.  He went back up river to face the monster again.

As he approached, the monster saw him: a huge grizzly bear, but one that wore the eagle's feather and was painted for war.  It was too fearsome a sight.  The monster fled and never returned to the woods.

The warrior changed back into a man and returned to his village in triumph.  From that day forward, he always had the four scratches on his face and could turn into a bear when needed.  When he grew old, he decided to always be a bear and went into the forest to be the new Grandfather Bear.

I've created a lot of artworks with horses in war paint, but I got to wondering how a bear would look.  Personally, I thought it came off a bit kitschy, so I added the story to give the scene a bit more context.