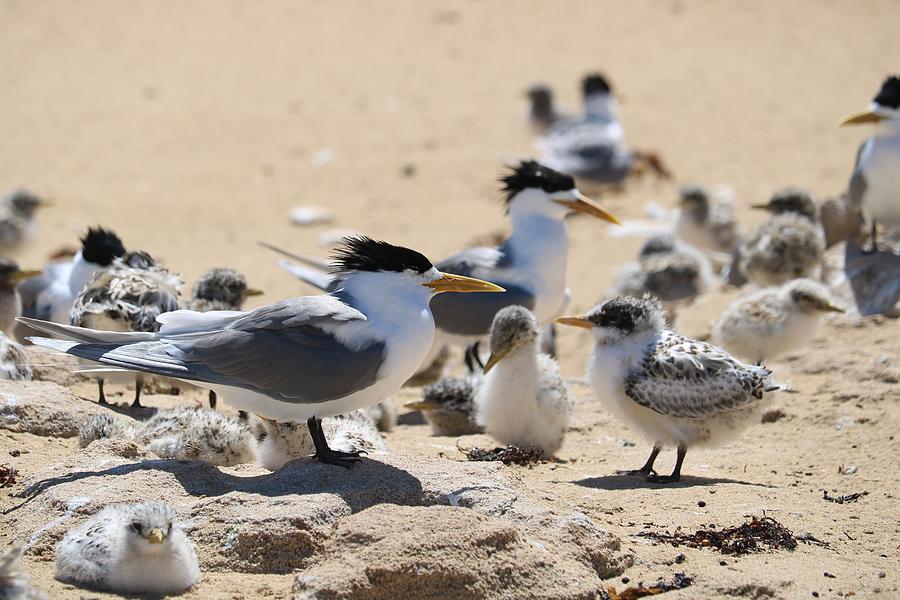 The greater crested tern (Thalasseus bergii), also called crested tern or swift tern, is a tern in the family Laridae that nests in dense colonies on coastlines and islands in the tropical and subtropical Old World. Its five subspecies breed in the area from South Africa around the Indian Ocean to the central Pacific and Australia, all populations dispersing widely from the breeding range after nesting. This large tern is closely related to the royal and lesser crested terns, but can be distinguished by its size and bill colour.

The greater crested tern has grey upperparts, white underparts, a yellow bill, and a shaggy black crest that recedes in winter. Its young have a distinctive appearance, with strongly patterned grey, brown and white plumage, and rely on their parents for food for several months after they have fledged. Like all members of the genus Thalasseus, the greater crested tern feeds by plunge diving for fish, usually in marine environments; the male offers fish to the female as part of the courtship ritual.

Beautiful picture, congrats on your feature in the "terns" group!

Wonderful photo of the tern chicks!...L

A superb family grouping Mik.....like and favourite and congratulations on your features.....I saw this one in Animal Photographs.