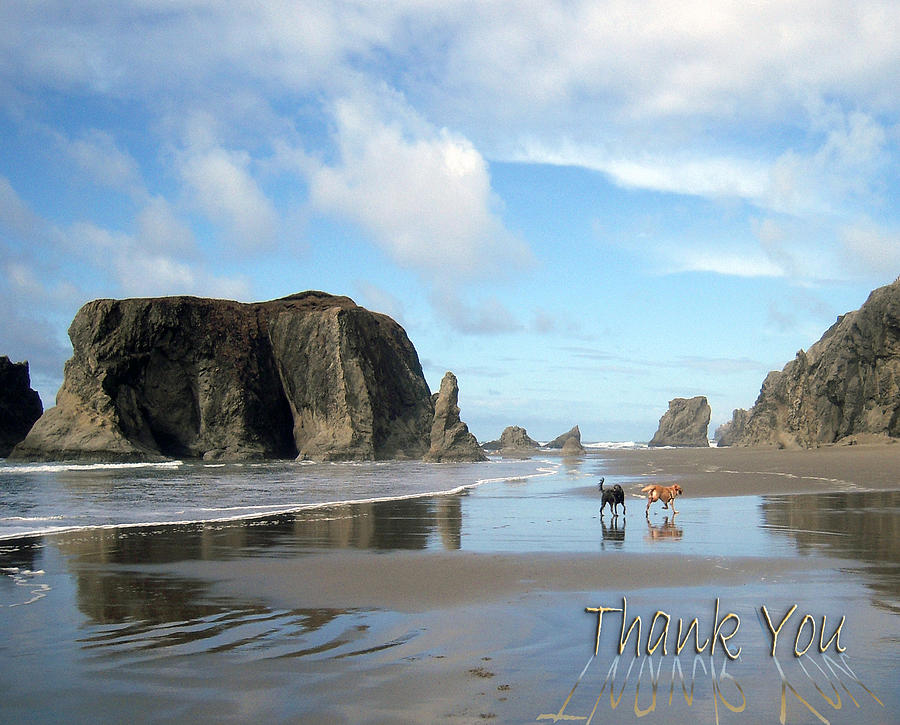 A beautiful day at Bandon Beach. This photo was taken on a November afternoon on the coast in Bandon, Oregon with my two labradoodles.

Labradoodles are a designer breed bred for therapy dogs. With the onset of so many people having allergies, there is a huge need to have a dog that has the intelligence and willingness to learn and a coat that would not shed. So some breeders in Australia matched the standard poodle with the labrador retriever to develop this wonderful intelligent and loving breed. By the third generation, most of the pups will have coats that do not shed and thus can be trained as therapy dogs for people who are allergic to dog dander. The two dogs in this photograph are my Cosette and Trudy. They are both re-homes.. or rescues, they shed..lol.. but we adore them.

Bandon /ˈb�ndən/ is a city in Coos County, Oregon, United States, on the south side of the mouth of the Coquille River. It was named by George Bennet, an Irish peer, who settled nearby in 1873 and named the town after Bandon in Ireland, his hometown. The population was 3,066 at the 2010 census.[2] In 2010, Bandon was named one of the "Coolest Small Towns in America" by BudgetTravel.

Before 1850, the Coquille Indians lived in the area. Then in 1851, gold was discovered at nearby Whiskey Run Beach by French Canadian trappers, though the gold rush did not have much of an impact on the area. In 1852, Henry Baldwin, from County Cork, Ireland, was shipwrecked on the Coos Bay bar and walked into this area. The first permanent settlers came in 1853 and established the present town site. In 1856, the first conflicts with Indigenous Americans in the United States arose and those were sent to the Siletz Reservation. In 1859, the boat Twin Sisters sailed into the Coquille River and opened the outlet for all inland produce and resources.
Bandon was founded by the Irish peer George Bennett in 1873. George Bennett, his sons Joseph and George, and George Sealey came from Bandon, Ireland. The following year the town's previous name of Averille was changed to Bandon after the town of the same name in Ireland. The next year, Joseph Williams and his three sons arrived, also from Bandon, Ireland. In 1877, the post office was established. In 1880, cheese making began. That same year, Congress appropriated money to build the jetty. In 1883, the first sawmill, school house, and Catholic church were built. In 1884, the U.S. Army Corps of Engineers began construction on the jetty.

Rock formations along the coast in Bandon (1994)
George Bennett also introduced gorse (Ulex europaeus) into the local area, which in the following decades went wild and became a nuisance in both the town and in the neighboring countryside. Gorse, a spiny plant, grows so thickly a person cannot walk through it. It is also a very oily plant, which easily catches fire.

Cranberries have been grown in Bandon since 1885, when Charles McFarlin planted vines he brought from Massachusetts. McFarlin had originally come to pan for gold in California. He did not make his fortune, or even a living, so he turned to what he knew best. He brought vines from Cape Cod and planted them in the state's first cranberry bog near Hauser. This bog produced cranberries for eight decades. His variety adapted to growing conditions on the west coast. The variety was named McFarlin in his honor and was the principal variety grown on the west coast until overtaken by the Stevens variety. Bandon is also the location of the first cranberry bogs to be wet harvested, which is done by building dikes around the bogs then flooding them.

This scene by the water seems so peaceful and quiet. Must be good to go for a walk there. Those are lucky dogs. l/f

Thank you, Dominique.. wish we could visit the coast more often, it is a blast for the dogs and for me!

A beautiful scene and a beautiful composition...l/F

Great Photo. You even got the paw prints in the sand. It is such a happy scene.

And a happy day too! Thank you so much for visiting & commenting, Janice!

What a beautiful way to say Thank You!!

A great ad photo for Oregon. I have never been there, but this image invites me. Lovely work.

Thank you, Nina! The Oregon Coast is truly a magical place!

Michele- a beautiful photograph- one of my favorite places on the Oregon coast! My wife and I have always really enjoyed our holidays in Bandon- a terrific place to visit! Love the crashing waves, beaches and unique rock formations! F&L&Twt!!

Thank you so much, Will!

Thank you so much, Steve!

Thank you, Linda..one of those incredible lucky days on the beach with my dear friends, Cosette & Trudy...doodles are awesome!

Thank you, Linda! They had so much fun that day!

Thanks, Kris...I love Bandon too! I will be digging out more photos when I get my huge photo collection out of my old computer..I feel kind of handicapped without them.

A beautiful shot of one of my favorite places on the Oregon Coast.