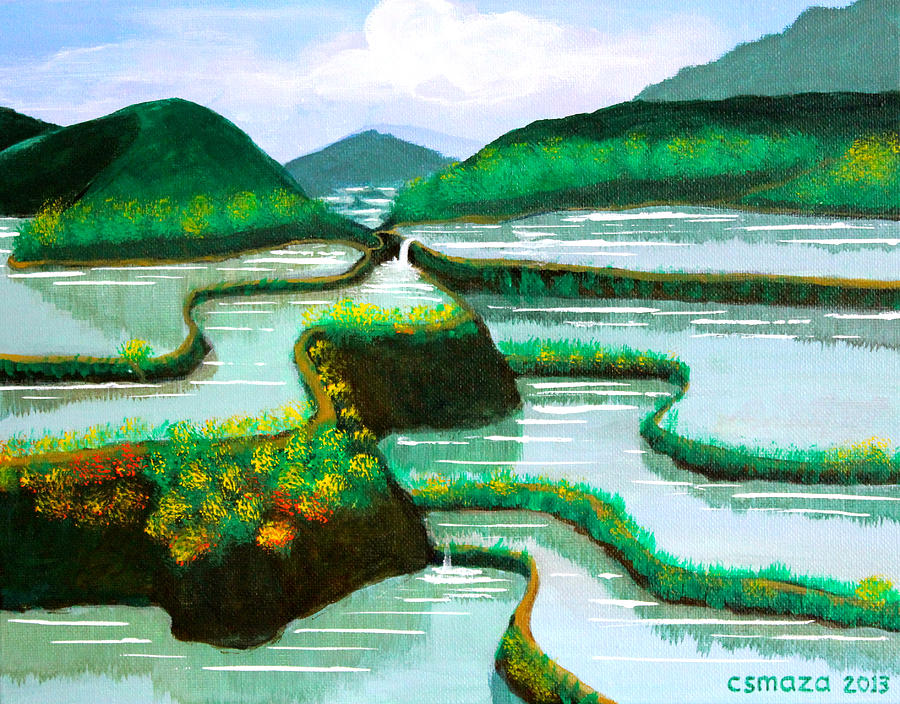 I have named this painting "Banaue," after the municipality called Banaue (Banawe) in the province of Ifugao, Philippines. Banaue is widely known for the UNESCO World Heritage Site, the Batad Rice Terraces and Bangaan Rice Terraces.
.....
The Ifugao Rice Terraces (Banaue Rice Terraces or Hagdan-hagdang Palayan ng Banaue) begin at the base of the mountain range and extend several thousand feet upwards. They are commonly referred to by Filipinos as the "Eight Wonder of the World." Accordingly, the total length of the terraces, when put end to end, would encircle half of the globe.
.....
The rice terraces manifest the engineering skill and ingenuity of Ifugaos, who built them 2,000 years ago. They are irrigated by means of mountain streams and springs that have been tapped and channeled into canals that run downhill through the rice terraces.
.....
This painting has/had been featured in the following groups:
1.) Asian Artists: April 2013
2.) Loving the Color Green: April 22, 2013
3.) Artists News: July 29, 2013
4.) All Things Beautiful: August 3, 2013

Hi? The artist is from?

Hi! I'm from the Philippines.

Amazing and beautiful portrait of this engineering marvel, Cyril! F/L

Revisiting. Love the way that the different levels lead the eye through the scene. l/f

Revisiting this fine composition and rendering of rice terraces - love the curving lines, colors and the way you created the reflections, Cyril!

I really like the perspective and composition to this picture with the curving lines leading to the mountain in the distance. Nice work L

Revisiting this image. Love the patterns created by the different levels. l/f

Thanks for the feedback, Steve.

It is just beautiful, Cyril, and so worthy of the World Heritage Site recognition.

Great composition, Cyril! Love the curves of the terraces and lines coming to the distant point and colors - liked!

Thanks, Michele. Your comments are very much appreciated.

Wow, Cyril, the ingenuity and engineering skills of those who built this system of rice terraces 2000 years ago that go on for several thousand miles is astonishing! Love this work in acrylics, Cyril! I love all of your work! Fave! L/F!

Thank you so much, Kimberlee.

What a peaceful gorgeous scene.

Another vote for this beautiful, flowing composition!

Cool scene..like how the water spills into lower terraces. LF

Such a wonderful composition with the wavy lines of the terraces and the mountains converging to a point. You've handled the water reflections so well and color balance, Cyril - L/F!

Thanks for the feedback and support, Michele.

This is so beautiful Cyril, very attractive scene and great work :) Liked

I just love your work Cyril - and this piece is especially lovely. FV

This is really eye-catching! V/F