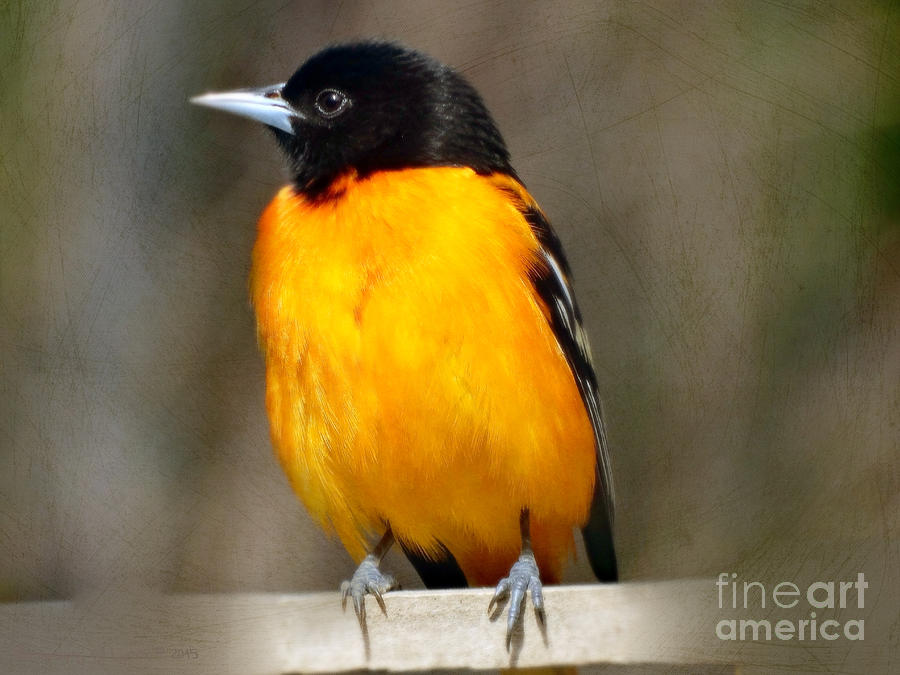 Every spring, for approximately one week; if I am lucky, I will spot a Baltimore Oriole. This photograph has a scratchy textured background, but the Oriole itself is exactly as seen while I took the photograph. This particular oriole is an adult male. Adult males and females always have white stripes on their wings.

Baltimore Orioles are common in eastern North America as a migratory breeding bird. It received its name from the resemblance of the male's colors to those on the coat-of-arms of Lord Baltimore. It is also the state bird of Maryland.

I live in an area close to what you call as; urban woodlots. It is often difficult to see one because they are often high in large, leafy deciduous trees. They do not live in deep forests, but will live near a river or stream.

Baltimore orioles forage in the trees for insects, berries, and nectar. Their favored insect is the forest tent caterpillar moth. They typically eat these in the larvae stage. Although they do eat berries, they prefer to eat larger fruit.

Predators of the Baltimore oriole can be the Eastern Screech Owl and Cooper's and sharp-shinned hawks. Sometimes larger rapacious birds will predate the oriole, including the peregrine falcons, great horned owls and barn owls. A common source of mortality occurs with the eggs, nests, and fledglings. The common predators of these can include the grackles, crows, blue jays, black-billed magpies and tree squirrels.