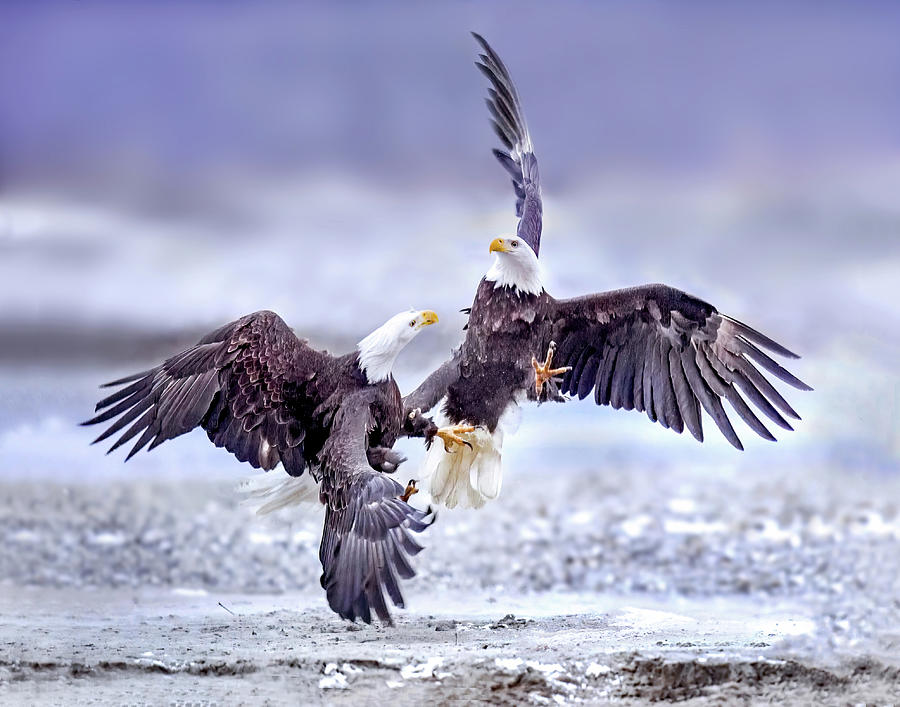 These two Bald Eagles are fighting over a salmon, early in the morning on a cloudy foggy day. There are lots of slow fish in the river that have spawned and are close to dying, but the eagles prefer stealing fish from one another, fish that have already been dragged onto the ground. With talons raised they look quite serious in this particular scene, and the winner will get the spoils. The other will either hang around for another chance at the fish later, or will fly up into a nearby tree, or maybe will fly to join some friends nearby.

what an excellent shot. L/F

Judi, what a stunning action shot of these two eagles fighting over a meal! Wow! Your timing is amazing! LF

Outstanding wildlife capture Judi! Congratulations on being chosen Artist of the Week in 1000 Views!!...L/T

Congratulations on your winning 3rd Place in the contest… WILDLIFE IN NATURE! F/L

Congratulations, on 3rd Place Win, in WILDLIFE IN NATURE, contest!

Congratulations, Judi, on your Win in the Wildlife in Nature Contest for this beautiful photograph! An amazing capture!

WOW, this is a fierce image, I love it

Revisiting this stunning action photograph! Congratulations on having your image selected by Dawn as a Weekly Dawn's Delight! F/L

Thanks very much for that honor, Larry! Appreciate it. :)

Thanks so much, Mary Lynn!

Thanks a lot, Kent!

Thanks very much, Tom!

Congratulations! You are one of 10 Dawn’s Delights for 11/15/2021!! This fine image of an identified wild bird is now featured on the homepage of Wild Birds Of The World - A Nature Photography Group. Please take a moment to add it to the 2021 Features Archive and Thanks discussion for additional visibility.

Dawn, thank you so much for the honor! I appreciate it so much. :)

What a fantastic capture! Love it.

All I can say is WOW another incredibly beautiful picture by Judi Dressler...

Thank you so much, Daniel!

Thanks very much, Morris! Appreciate the nomination. :)

Thanks a lot, William!

Thanks much for the feature, Jordan!

Thanks a lot, Michelle!

Such an awesome capture. You certainly caught them at a disadvantageous moment for them. Great for you!

Thank you very much, Susan!

Thanks a lot, Lynn!