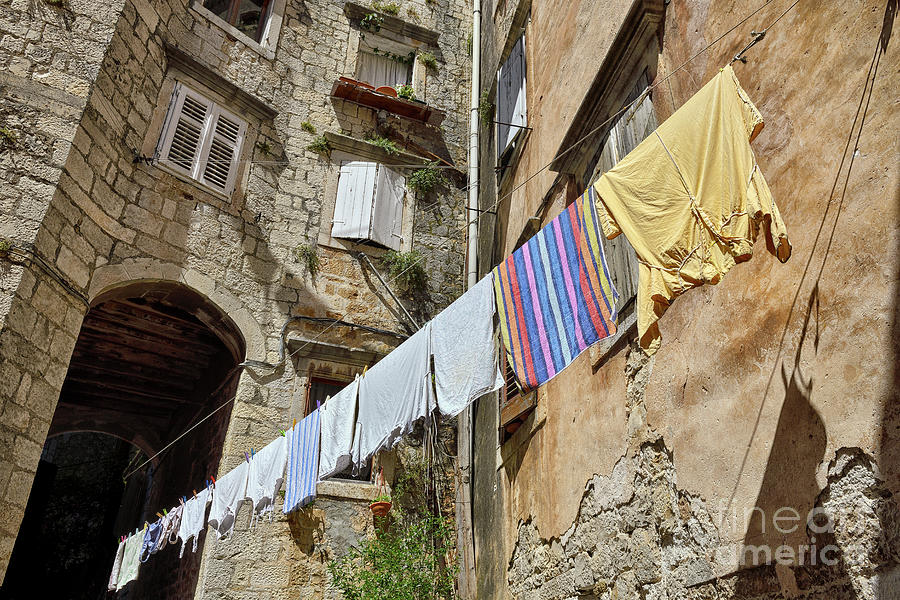 Trogir is a historic town and harbour on the Adriatic coast in Split-Dalmatia County, Croatia, with a population of 10,818 (2011) and a total municipal population of 13,260 (2011). The historic city of Trogir is situated on a small island between the Croatian mainland and the island of Čiovo. It lies 27 kilometres (17 miles) west of the city of Split.

In the 3rd century BC, Tragurion was founded by Greek colonists from the island of Vis, and it developed into a major port until the Roman period. The name comes from the Greek "tragos" (male goat). Similarly, the name of the neighbouring island of Bua comes from the Greek "voua" (herd of cattle). The sudden prosperity of Salona deprived Trogir of its importance. During the migration of Croats the citizens of the destroyed Salona escaped to Trogir. Initially the Roman Tragurium was one of the Dalmatian City-States. From the 9th century on, Trogir paid tribute to Croatian rulers and to the Byzantine empire. The diocese of Trogir was established in the 11th century (abolished in 1828; it is now part of the Roman Catholic Archdiocese of Split-Makarska and has temporarily been a Latin titular bishopric) and in 1107 it was chartered by the Hungarian-Croatian king Coloman, gaining thus its autonomy as a town.

In the year 1000 the Republic of Venice received submission from the Tragurium inhabitants and the city started since then to have commerce with the Italian peninsula enjoying cultural and economic improvements.

This photography was made with a Nikon D850 camera from a backstreet of Trogir, Croatia away from the tourists.

Photograph made with a Nikon D850

Croatia Through the Lens - November 2019

this is interesting, do neighbors share the line? L

Constance ... it is difficult to give a concrete answer, but it is possible that people who live here all their lives might. Thank you for supporting the photog, "Backstreets of Trogir"

Apologies Norman. Your work is featured in the Croatia Through The Lens Photography Group!

Tina ... I want to thank you for featuring the Summer photog, "Backstreets of Trogir", in the Fine Art America group, "Croatia Through The Lens"

Congratulations Norman Gabitzsch! Your image has been selected to be featured on the “Landscape and Seascape Photography Only" Group Home Page. A permanent preview of this featured image has been added to the group’s discussion post entitled “Featured Images of the Month” within the group to share this achievement with others, as well as being posted to the group's Facebook page: https://www.facebook.com/groups/556405381500963/ Thank you for your participation in the group! ~ Tina (Admin 2019)

Jeff ... thank you for featuring the photog, "Backstreets of Trogir", in the Fine Art America group, "What's New".

Nicklas ... thank you so much for the comment on the Croatia travel photo, "Backstreets of Trogir".

Congratulations Norman, your work is Featured in "Photographic Camera Art" I invite you to place it in the group's "2019 Featured Image Archive" Discussion!! L/Tweet!

Don. thank you for featuring and supporting of the photo, "Backstreets of Trogir", in the Fine Art America group, "Photographic Camera Art".

Aicy ... thank you so much for the comment and support of the Croatia travel photograph, "Backstreets of Trogir".