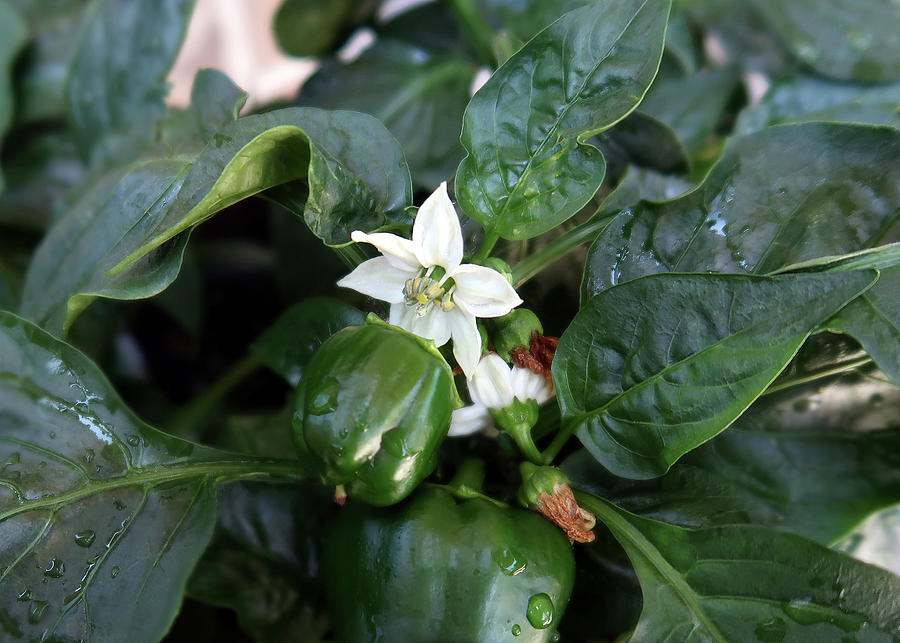 Color macro photograph of a bell pepper plant growing on a pot on a partially shaded patio in the greater Houston, Texas, area. Located in an accessible place where its stages of growth can be enjoyed, it thrives on organic soil mix, rainwater, daily waterings, and 6 to 8 hours of sunlight per day. In Houston, shade is a benefit in growing vegetables, as long as they get their daily minimum of sunshine.

This image shows the leaves, several small peppers, and the beautiful white flowers in which each pepper develops. The flowers are shown in various stages of growth. Inside the most prominent flower, one can see a green pepper at the center. As the pepper grows, the flower will be forced away and ultimately die—a fascinating process to watch unfold each day.

Hidden beneath the leaves are several more peppers. Each plant is said to produce about 6 to 8 peppers. So far I have counted five or six in various stages. This established pepper plant from a local nursery is called “California Wonder.”

If the green peppers are allowed to ripen further, they will turn yellow and eventually red. Also known as sweet pepper, pepper or capsicum, the fruit of plants in the Grossum cultivar group of the species Capsicum annuum. Bell peppers are sometimes grouped with less pungent pepper varieties as "sweet peppers". While they are fruits—botanically classified as berries—they are commonly used as a vegetable ingredient or side dish.

Pieces of bell pepper are commonly used in garden salads and as toppings on pizza. There are many varieties of stuffed peppers prepared using hollowed or halved bell peppers.

Bell peppers are 94% water and 5% carbohydrates, with negligible fat and protein. They are rich sources of vitamin C, containing 97% of the Daily Value (DV) in a 100 gram reference amount. Red bell peppers have more vitamin C than green bell peppers.Their vitamin B6 content is moderate (17% DV), with no other micronutrients present in significant amounts.

Copyright 2020 Connie Steitz Fox. All Rights Reserved. Please note: The watermark will not appear on your purchased artwork.

FEATURED on the homepage of Just Perfect, May 2020. My thanks!

Hello, your beautiful work has been featured on the Floral Photography & Art page! Feel free to post your feature in the New Features thread on the Discussions page.

Janis Vaiba, thank you for choosing "Baby Bell Peppers" as a homepage feature in Just Perfect!