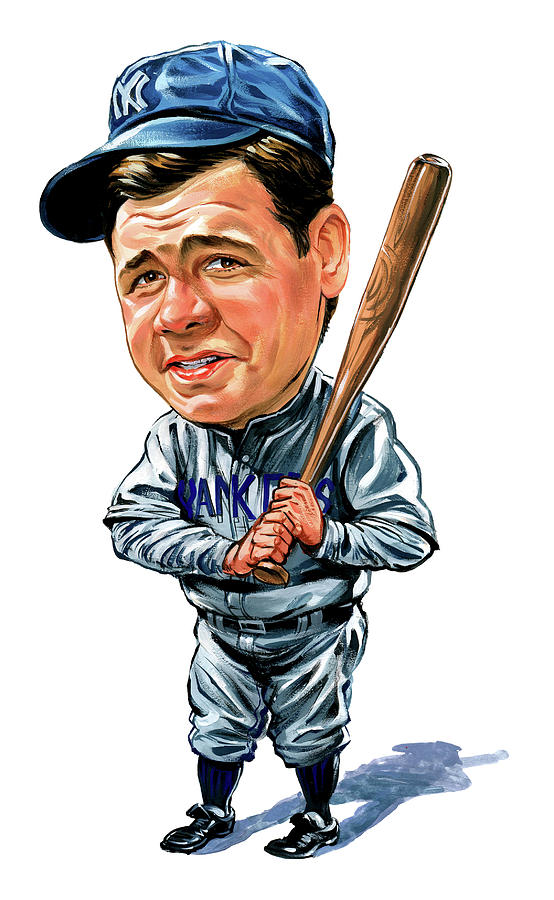 George Herman Ruth, Jr. (February 6, 1895 - August 16, 1948), best known as "Babe" Ruth and nicknamed "the Bambino" and "the Sultan of Swat", was an American baseball player who spent 22 seasons in Major League Baseball (MLB) playing for three teams (1914-1935). Known for his hitting brilliance, Ruth set career records for home runs (714), slugging percentage (.690), runs batted in (RBI) (2,217), and on-base plus slugging (OPS) (1.164). Ruth originally entered the major leagues with the Boston Red Sox as a starting pitcher, but after he was sold to the New York Yankees in 1919, he converted to a full-time right fielder. He subsequently became one of the league's most prolific hitters and with his home run-hitting prowess, he helped the Yankees win seven pennants and four World Series titles. Ruth retired in 1935 after a short stint with the Boston Braves, and the following year, he became one of the first five players to be elected into the National Baseball Hall of Fame. Ruth was the first player to hit 60 home runs in one season (1927), a mark first eclipsed by Roger Maris in 1961 with 61. Ruth's lifetime record of 714 home runs stood until 1974 when it was surpassed by Hank Aaron. Unlike many power hitters, Ruth also hit for a high batting average: his .342 lifetime average is the tenth-highest in baseball history, and in one season (1923) he batted .393, a Yankee record. Ruth dominated the era in which he played. He led the league in home runs during a season twelve times, slugging percentage and OPS thirteen times each, runs scored eight times, and RBIs six times. Each of those totals represents a modern record. Ruth is credited with changing baseball itself. The popularity of the game exploded in the 1920s, largely due to his influence. Ruth ushered in the "live-ball era", as his big swing led to escalating home run totals that not only excited fans, but helped baseball evolve from a low-scoring, speed-dominated game to a high-scoring power game. He has since become regarded as one of the greatest sports heroes in American culture. Ruth's legendary power and charismatic personality made him a larger than life figure in the "Roaring Twenties", and according to ESPN, he was the first true American sports celebrity superstar whose fame transcended baseball. Off the field he was famous for his charity, but also was noted for his often reckless lifestyle. Ruth has been named the greatest baseball player of all time in various surveys and rankings. In 1998, The Sporting News ranked him number one on the list of "Baseball's 100 Greatest Players". In 1999, baseball fans named Ruth to the Major League Baseball All-Century Team. In 1969, he was named baseball's Greatest Player Ever in a ballot commemorating the 100th anniversary of professional baseball. In 1993, the Associated Press reported that Muhammad Ali was tied with Babe Ruth as the most recognized athletes in America. In a 1999 ESPN poll, he was ranked as the third-greatest U.S. athlete of the century, behind Michael Jordan and Ali. Source: Wikipedia.org

Congratulations on your sale, well done...

Congrats on your sale! RjFxx