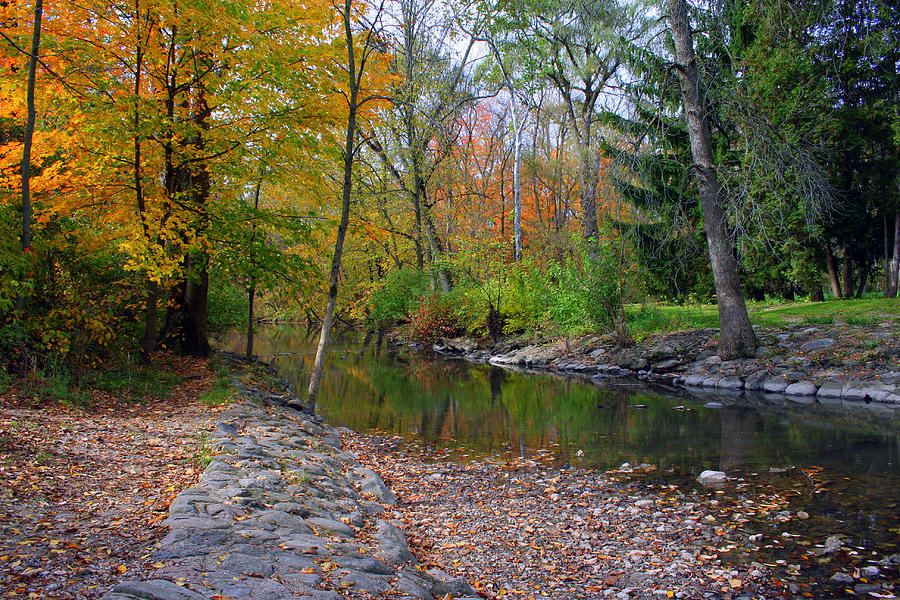 Petrifying Spring Park comprises of approximately 350 acres of woodlands, flora, and river basin. It first opened April 1, 1928. The name was derived from a Calcareous formation that appears on the South Ravine. The ravines, basin, and winding Pike River are remnants of a geological period, the Pleistocene Epoch, which started one million years ago. A continental glacier formed by snow turning to ice and it moved southward from the Labrador-Hudson Bay Region until it covered North America as far as the Ohio and Misouri Rivers. On the South Ravine, at several locations, water trickles from the hillside. Early settlers called this run-off "The Indian Springs". The water was believed to have great curative powers and was the favorite stopping place for Potawatomi Indian people and early travelers to rest and drink the cool refreshing water.
The low basin, with meandering Pike River, formerly occupied the setting of an old Indian camp site. Archaeologists and farm people have found arrowheads, trade items, and other artifacts in the park, adjacent farm fields, and nearby University of Wisconsin Parkside campus grounds. An explanation of the springs hydrology is given by G.F. Hanson, State Geologist, University of Wisconsin-Madison. ﻿He states, "The 'spring' that furnishes drinking water in the park is a drilled artesian well in the Niagara dolomite, but the spring on the hillside is not an artesian flow but a contact spring. It is caused by rainwater percolating downward to a relatively impervious layer and then emerging as a spring from the hillside. The petrified sticks, acorns, etc. that occur at such springs are not petrified in the sense that the organic matter is replaced with mineral matter. It is simply covered with lime. It has taken may years for the lime-laden water to form the moss-like stone which appears on the South Ravine, and can be seen along the hillside trail. It lies just under the leaf humus."

Thanks so much, Jasna!

Thanks so much, Shirley!

Thank you, Mohammad! Much appreciated! Kay

David, "Midwest America Photography" group, thanks much for the homepage feature! Tweeted the group.

Stefano, "10 Plus' group, thanks so much for the homepage feature!

"Water Forms" group, thanks much for the homepage feature, Doug!

Yes it is! Thank you, Andrew!

Thank you, Carol! Much appreciated! Kay

Thanks so much, Johanna for the homepage feature in "Over 2000 Views" group!

Autumn is one of the most beautiful seasons, and this view is one of tranquility, peace, and wonderful color.

Beautiful work Kay! Congratulations on over 10 features on FAA!

Kay, Revisiting this wonderful scenic view of autumn and congrats on all of your wonderful features G+ and T

Congratulations on this image receiving over 10 features from FAA groups! tweet

So sorry Kay! Beautiful image, I so hate auto correct!

Congratulations on your beautiful art being awarded 10+ features! tweet

Kay, Fantastic capture of a day in autumn and congrats on all of your features, L/F

What a cool walkway there beside the stream. Very lovely fall scenic Kay! V/ fav/ Pamela :)