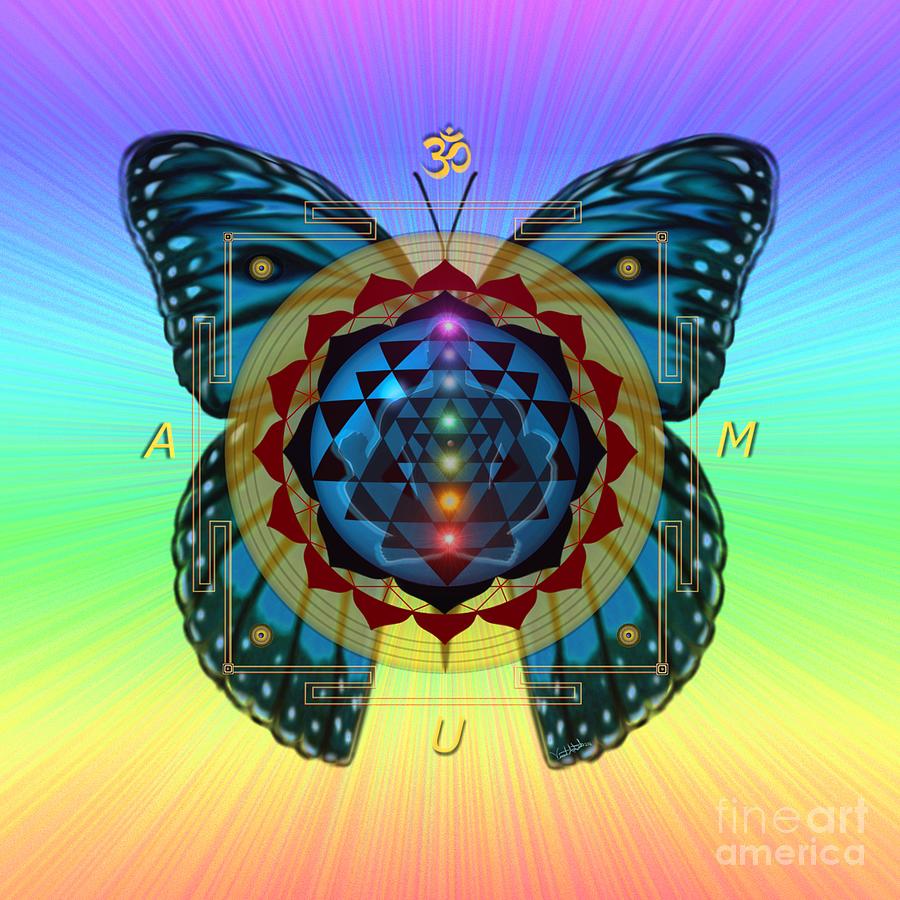 A considerable amount of symbolism has been incorporated in this image. In the center there is a series of 9 interlocked triangles radiating out from a central bindu (dot) forming of a Shri Yantra (sometimes "Sri Chakra") which is considered a "sacred geometry" that originated in India).

A silhouette of a person posed in a traditional lotus position has been overlaid in the middle with a row of 7 orbs of light in the colors of 7 chakras found in the Hindu Yogic tradition (those colors are also the main colors of a rainbow and appear again as the background to the butterfly which is included to represent transformation.

There are 2 rows of lotus flower petals (8 Black & 16 Red) representing various chakras overlaid on a yellow disk to symbolize the sun. 3 circles extend beyond the petals to represent the past, present, and future existing together and an "earth square" has been added containing 4 doors/portals facing outward to the 4 cardinal directions.

The symbol in the top center is the sanskrit visual representation of AUM (OM). In the yogic tradition AUM represents the 3-fold division of time (A = the waking state, U = the dream state, and M is the state of deep sleep). This corresponds with the visual symbol "OM" which appears at the top of the image (looks like the number 30 with a little hat on top). That symbol represents the meaning of AUM. The bottom of the section resembling the number 3 symbolizes the waking state (A), the middle curve (section resembling the number 0) signifies the dream state (U), and the top of the section resembling the number 3 denotes the unconscious state of deep sleep (M). The dot at the top signifies the fourth state of consciousness (Turiya) and the semi-circle beneath the dot represents Illusion/Maya and separates the dot from the other three curves. Maya is said to be the obstacles that get in the way of our spiritual development. It is said that Maya prevents us from realizing the highest state of bliss (Turiya).

Om is all about threes. It is made up of the sounds of the letters A-U-M and has its roots in Hinduism. Within that tradition, the Om symbol is said to represent the one-ness of all creation, including the heavens, earth and underworld (another set of 3). Others say it is the representation of the three Hindu gods, Brahma, Vishnu and Shiva. Some say the actual shape of the symbol represents the syllables of the word: the three being the Sanskrit letter for aahh, the small "O" is the oooh and the half moon at the top is the mmm sound. Om/AUM is considered to be one of the most powerful mantras, and the ritual of chanting Om has been done for thousands of years.

The Shri Yantra is considered one of the most powerful mandalas and is associated with abundance, affluence, and prosperity. A great gift for someone seeking enlightenment or who just likes butterflies and rainbows!

COPYRIGHT NOTICE
All the images of Vincent Autenrieb must not be reproduced or copied without permission and are subject to copyright. The images are original images by the artist and any reproduction, modification, publication, transmission, transfer, or exploitation of any of the content, for personal or commercial use, whether in whole or in part, without written permission from the owner is prohibited by international copyright law. All rights reserved. Providing attribution is not a satisfactory substitute for obtaining written permission. Thank you.

A truly superb composition Vincent. As powerful as it is beautiful conceptually and aesthetically.

Thank you Aberjhani. Your kind words are humbling and appreciated.

Thank you John M. Bailey for featuring this piece in "Images that Excite You!. ...Truly honored.

Congratulations, your art work is featured on the homepage of "Ardent Essence Of Your Soul" group. Stay blessed and happy and lead free. :)

Thank you Mario! Really appreciate the thoughtful and insightful feedback.

Thank you Michell Rosenthal! Appreciate the support and encouragement.

It is truly an honor Michell Rosenthal. I am humbled and encouraged by the recognition.