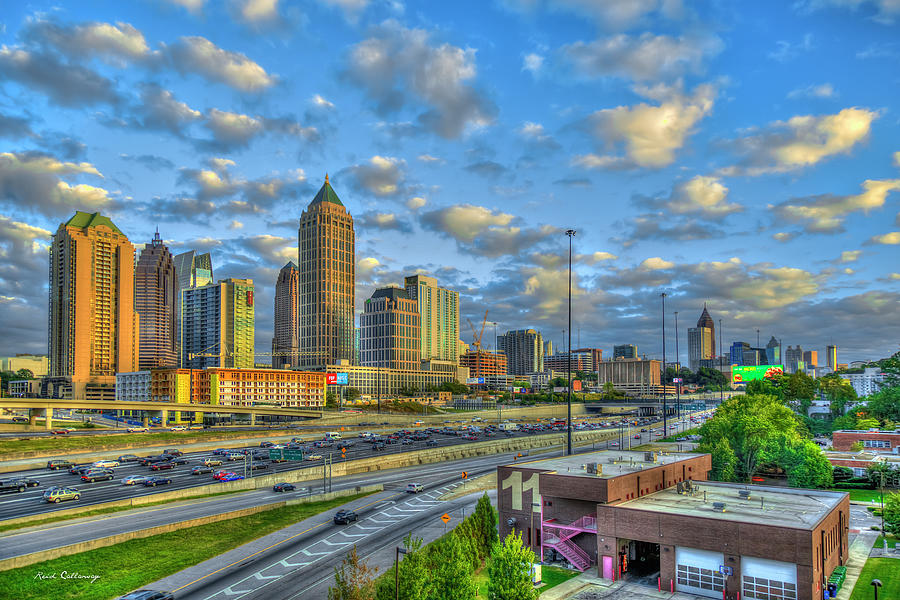 I captured this Atlanta image late in the afternoon in October with the afternoon setting sunlight glowing off the Midtown and downtown skyline. The Atlanta fire station #11 can be seen in the foreground bottom right. Enjoy!

Atlanta was established in 1837 at the intersection of two railroad lines, and the city
rose from the ashes of the Civil War to become a national center of commerce. In the decades following the Civil Rights Movement, during which the city earned a reputation as "too busy to hate" for the progressive views of its citizens and leaders Atlanta attained international prominence. Atlanta is the primary transportation hub of the Southeastern United States, via highway, railroad, and air, with Hartsfield-Jackson Atlanta International Airport being the world's busiest airport since 1998.

Atlanta is considered an "alpha(-) world city, and with a gross domestic product of US$270 billion, Atlanta's economy ranks 15th among world cities and sixth in the nation. Although Atlanta's economy is considered diverse, dominant sectors include logistics, professional and business services, media operations, and information technology. Topographically, Atlanta is marked by rolling hills and dense tree coverage. Revitalization of Atlanta's neighborhoods, initially spurred by the 1996 Olympics, has intensified in the 21st century, altering the city's demographics, politics, and culture.

Thank you Tatiana Travelways for appreciating my artwork and for making this image one of your personal Favorites! 1/9/2020

Thank you Janis Vaiba for featuring my artwork in our group….Just perfect! 1/23/2020

Thank you John Bailey for admiring my artwork and for making this image one of your personal favorites! 1/18/2020

Congratulations! Your beautiful HDR image has been featured on the homepage of the original "HDR photography" group here at Fine Art America.