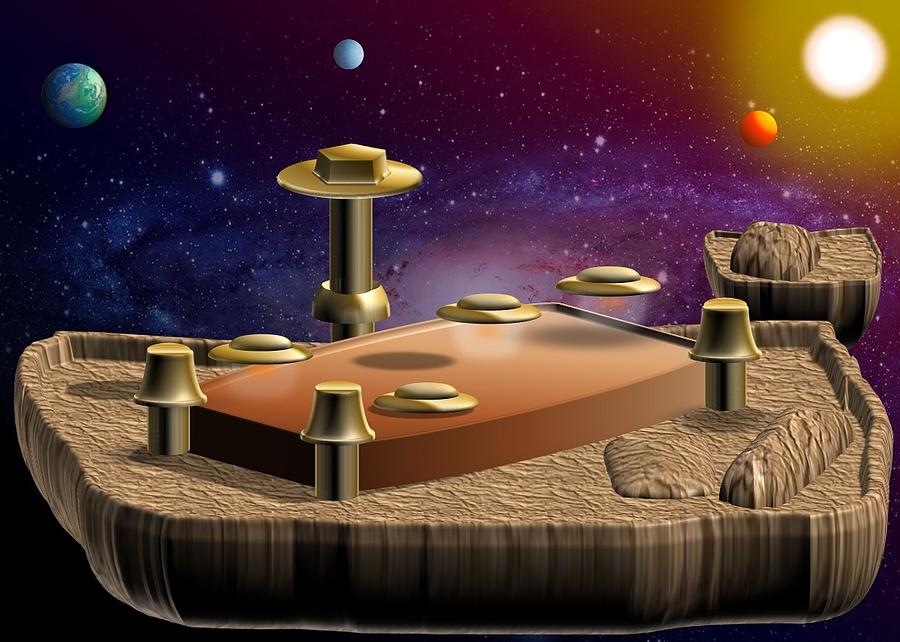 This photograph was taken by Astronaut Cirilus Mazari on the 21st of November 2513, aboard a United Asteroids space ship bound for Planet Mars. It shows the inter galactic terminal in Asteroid Cirimaz, serving a group of asteroids that orbit between the planets Mars and Jupiter.
�.
It has been almost three hundred years since man started exploring and mining the asteroids in that part of our solar system. The discovery of the metal known as unobtanium has highly revolutionized the manufacture of space shuttles, making space travels far less expensive and more affordable.
�..
The group of asteroids around Cirimaz is known for its vast deposits of unobtainium, a very light, frictionless and yet very strong kind of metal that can withstand high temperatures and is resistant to radiation damage.
�..
Seriously, this is just a digital art I created using my computer. :)
�.
This art work has been featured in the following FAA groups:
1.) Excellent Self-Taught Artists: November 23, 2013
2.) Your Best Work: November 24, 2013
3.) Digital Veil: November 24, 2013
4.) Comfortable Art: November 24, 2013
5.) Artists News: November 29, 2013
6.) Asian Perspective: December 11, 2013
7.) Out of the Ordinary: September 17, 2015

Congratulations, your creative and unique art work is featured in the "Out Of The Ordinary 1 a day" group!

Thank you, Lyric. I really appreciate it.

I'm glad you like it. Thank you so much, Michele.

Wow Cyril this is a great digital image!! lfv

Beautifully done Cyril! You space background is wonderful! Love all the colors and great composition!! f/love

So cool and so creative! fv :) ... Enjoyed reading your fun description too!! :)

I'm glad you enjoyed reading my description. Thanks, Darlene.

L/F I have no words ,just MASTERPIECE.

Thanks for the compliment, Viggo.

Great imagination that you have, Cyril. V

Great piece of digital art and I love the story in the description, Cyril! I think you need to write some science fiction - liked!

Good idea, Michele! I will think about that. Thanks.

Thank You for Submitting your Artwork.... Liked the subject, description, technique, composition, and color... So this week it was Published in the Internet publication ARTISTS NEWS.... Make sure you are subscribed, so you can Promote weekly... YOU or Friends Can use Ctl-C to copy the link: http://paper.li/f-1343723559 and Ctl-V to put it into your the Browser Address bar, to view the publication. Then, Tweet, FB, and email, etc a copy of the publication, to just anyone you know would be interested.

Thanks, Nadine and Bob. I'm already subscribed to ARTISTS NEWS.

Creative and very intriguing to me! Great imagination Cyril :) Fav/Like

Wonderful concept and creatively done ..and that great description! LF