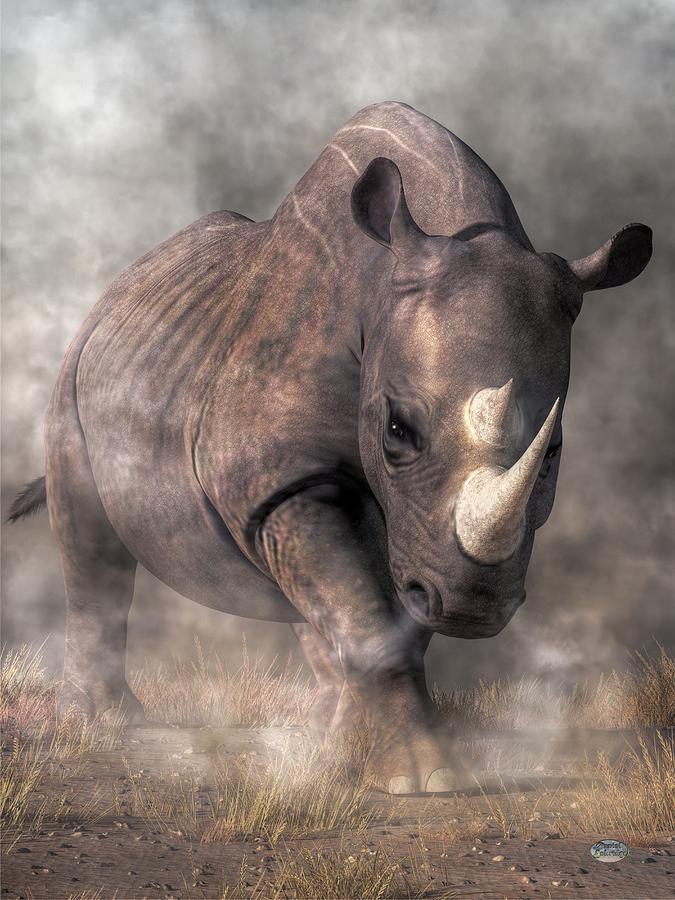 Out of the mists stomps one of nature's powerhouses: the magnificent rhinoceros, one of the most iconic of African beasts. With its thick skin and sharp horn, this creature is the tank of the animal world. In this piece of wildlife artwork, the rhino gives an angry snort as he marches aggressively towards the viewer. His steamy breath mixes the mists that enshroud the landscape.

There are two major types of Rhino in Africa: The Black Rhinoceros, and the White Rhinoceros. They are often hunted for their horns. Poaching is a huge problem for the species. There are also three types of Asian rhinos: Indian, Javan, and Sumatran. Despite conservation efforts, several types of rhino are critically endangered.

Rather than traditional forms of art such as painting or photography I use a computer to create my images. It's called 3D Rendering and works like so: I make a scene by sculpting and arranging digital models in a virtual 3D space. After stipulating lighting and atmospheric effects I have the computer create a simulated environment from which I take a virtual snap shot of the scene. Then using image editing software and something more akin to traditional painting techniques (via a Wacom tablet) I go over the work adjusting colors adding brushwork painting in details etc. to produce the final image. Software I use includes: Sculptris ZBrush Blender3d Vue Daz Studio and GIMP.

Awesome work of art! Congrats on your recent sale. L/F

Congratulations on your sale, Daniel!

Congratulations on your sale, looks great!!!

Congratulations on your sale Daniel!

Fantastic work !!! Congrats on your sale.

Many thanks to the buyer in Nevada!

Wonderful! Congrats on your sale!

Congratulations on your feature in the Group Save The Rhino.

WoW!!! Daniel, this is an incredible creation!....favorite for sure.

This is fantastic, Daniel. The texture on him is outstanding!

Wouldn't want to run into this guy . . . so life-like! Wonderful art work! f/v

I can feel his breath on my neck...Yikes! Great work Daniel! L/F

Thanks for the features, Mariola!

A dramatic pose and render for a dramatic creature. Super work on the textures in particular! L

His intensity and strength are quite moving, Daniel! Very nice. l/f