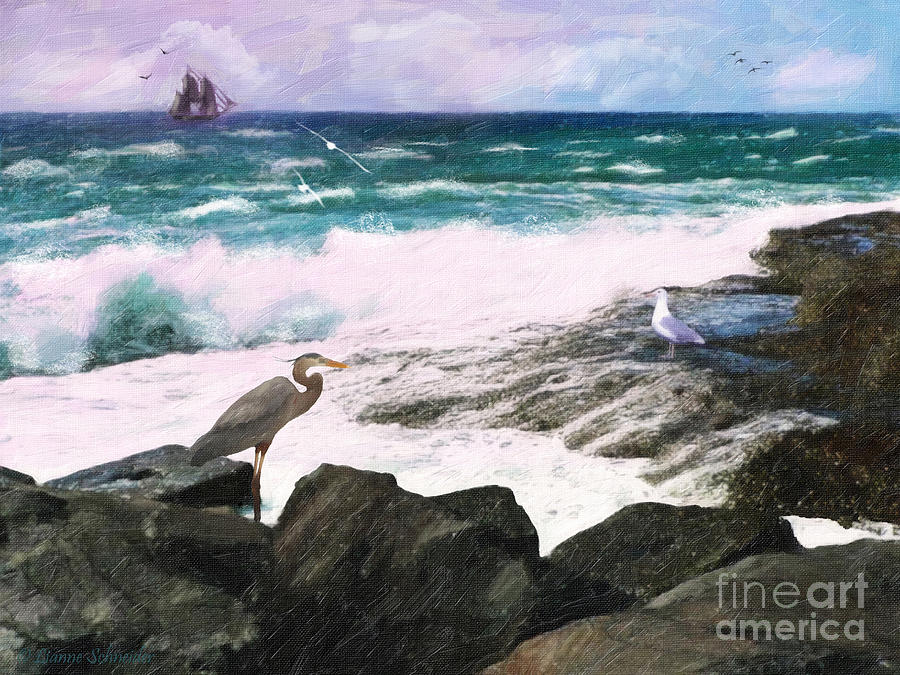 The simplest definition of a seascape is that it is a picture of the sea but in the art world, a seascape is a photograph, painting, or other work of art which depicts the sea, in other words an example of marine art. Typically marine art includes ships or lighthouses, rocky shorelines and other such identifying characteristics. For example, Winslow Homer's "Summer Squall" depicts high waves during a storm against a rocky foreground.

During the 17th century in a period called the Dutch Golden Age, maritime painting was highly valued for its shift to a low - sea level - view of battles or calm seas. Vroom's paintings typify the genre at that time. English, French and Russian Romanticism also featured marine paintings such as Aivazofsky's "The Ninth Wave." Seascapes and marine art were among the most popular paintings and lithographs during the 19th century and a number of American painters earned their fame during this period - Edward and Thomas Moran, J. Buttersworth, A. Jacobsen, and J.G. Tyler among many others.

"Flow with life's currents. . . Dare to ride on bold waves of change. . . out to uncharted waters . . .
For there will always be singers on the shore to welcome you back to the safe arms of Earth . . ."
Kristin Zambucka

After the Sea Ship by Walt Whitman

After the sea-ship, after the whistling winds,
After the white-gray sails taut to their spars and ropes,
Below, a myriad myriad waves hastening, lifting up their necks,
Tending in ceaseless flow toward the track of the ship,
Waves of the ocean bubbling and gurgling, blithely prying,
Waves, undulating waves, liquid, uneven, emulous waves,
Toward that whirling current, laughing and buoyant, with curves,
Where the great vessel sailing and tacking displaced the surface,
Larger and smaller waves in the spread of the ocean yearnfully flowing,
The wake of the sea-ship after she passes, flashing and frolicsome
Under the sun.
A motley procession with many a fleck of foam and many fragments,
Following the stately and rapid ship, in the wake following.

Thank you to the following for featuring this painting:

Thank you for your interest in my artwork. I am a western New York based artist with a passion for the sea and a deep love for the natural world around me. If you would like to see more, my full portfolio can be found at http://lianne-schneider.artistwebsites.com. If you enjoy my art works, please feel free to share this link with friends or share on your social networks by pushing the Pinterest, FB, Google+, Twitter or SU Buttons! Thank you! The Fine Art America Watermark will NOT appear on the finished product.

This painting, as with most of my digital paintings, is an ORIGINAL work of art created entirely on a Wacom tablet using a number of different painting programs and various genres of painting styles overlaid upon each other, much the same as the old printing process of chromolithography. In this case, the reference image is a photo in the public domain courtesy of USGS.

Because the final creations are entirely digital in nature they are considered to be original art work, not reproductions. According to the International Association of Fine Art Digital Print Makers (IAFADP), "An original digital print is not based upon using original artwork outside of the computer. The artist may use elements as source materials, such as photographs, drawings or other appropriated images (those in the public domain), but THE FINAL FORM OF THE WORK EXISTS ONLY IN THE COMPUTER AND AS THE FINAL PRINT OR AS AN EDITION OF PRINTS." Furthermore, according to ArtBusiness.com, there is a distinct difference in value between a print/scan of an original watercolor, painting or photograph "...as opposed to original digital works of art created by digital artists entirely or in part on computers which ARE considered to be unique."

Please contact the artist, Lianne Schneider, directly if you purchase this image as a giclee print on canvas, framed or unframed. A signed and numbered Certificate of Authenticity is available for each canvas indicating title of the work, my name, date of creation, a thumbnail of the painting, the origin of original work if the painting is a derivative, the number of your print in the limited printing and a guarantee that the work will no longer be available to the public in a canvas format once a total of 25 canvas prints are sold from all potential vendors.

All images are protected by copyright and may not be reproduced, downloaded, distributed, transmitted, copied, reproduced in derivative works, displayed, published or broadcast by any means or in any form without prior written consent from the artist. My copyright does not imply rights to an underlying public domain image and I make no such claim. Copyright on works derived from or based on images in the public domain applies only to the subsequent manipulation or the digital painting resulting from my own style and interpretation. The original image remains in the public domain and such images are used in accordance with international law.

Love this image! l/f I will pray for you Lianne through your battle! Send love and prayers!

Of course I absolutely love this beautiful image dear Lianne; and the words of Walt Whitman are a perfect pairing for your beautiful artwork - thinking of you as you rest at home for a couple of weeks and sending warm hugs full of Cosmic energies sweetheart....xoxoxo jd

What a dynamic, beautiful and spiritual vision of life on earth! A joy and a song for the soul. With fervent hopes for your recovery. We all look forward to hearing that you are feeling better and at home. fav

My apologies to all who have left or will leave comments on my work this week. I would so love to thank you each in person but circumstances prevent me from doing that. I am in the hospital fighting leukemia and will need most of my energy for that battle. That doesn't mean I don't cherish every single word from each of you - I treasure them. And when I am well - God willing - I will come back and catch up with each of you. In the meantime, thank you from my heart. To the hosts who have honored me with features - I thank you so much as well.

Saad, my sincere thanks for featuring this painting in your wonderful group I LOVE SEASCAPES 1 PER DAY. I'm more grateful than I can say.

Lianne, this is just beautiful. I feel as though I am right there! L+

This is a fantastic seascape digital art masterpiece Lianne. I like every aspect of it. :-) fv

Pamela and Lisa, my sincere thanks to you for featuring this image in 3 A DAY WAITING ROOM ART and IN THE MOOD. I'm so thrilled and honored.

John and Darren, I thank you so very much for featuring this painting in your fine groups IMAGES THAT EXCITE YOU and 3 A DAY GREETING CARDS FOR ALL OCCASIONS. I'm just thrilled.

Jeff, Chuck, Anne and James, my most sincere thanks for featuring this work in your amazing groups PLEASING THE EYE, 3 A DAY AAA IMAGES, DIGITAL REALISM and BEAUTY. I'm truly incredibly honored.

Thank you so much Naomi. I so appreciate your featuring this image in WAITING ROOM ART. It's a real honor.

Shirley, Julie and Laura, I'm so very grateful to each of you for featuring this painting in your fabulous groups COMPOSITE OR MIXED MEDIA, NATURES WAY and DIGITAL MAGIC. It's such an honor!

Beautiful work and image, I can really feel this image! l/f

Barbie and William (x2), my most sincere thanks for featuring this image in your fabulous groups - THE 200 CLUB - PHOTOS WITH OVER 200 VIEWS, BEST IMAGE PROMOTION and ART WITH FLAIR. That means a great deal to me.

Another classic from you! Beautifully done! v/f

Congratulations on your feature in The 200 Club, a "rising star" photography group in which only a select few are featured. It is my pleasure to feature desirable art work like this. Congratulations also on your other well-deserved features and on your hundreds of views!

What a marvelous seascape you created, Lianne ! Fantastic energy and movement of the waves. Excellent work ! f,l

A very sincere thanks Dawn for featuring this image in SHIP TO SHORE AND ALL THINGS MORE. I can't tell you how much that means.

Stefon I can't thank you enough for featuring this work in your fine group - APPRECIATING WORKS FROM ALL MEDIUMS. It means a great deal to me.

Dan thank you so much for featuring this new painting in PREMIUM FAA ARTISTS. I barely had time to post it! So I'm very honored and just thrilled.

This is stunning Lianne!!!

You know how I love the ocean Lianne, and this is absolutely wonderful! Beautiful technique and color and I love the egret! Fantastic work! L/F!

What a beautiful seascape, love this, magnificent work, L!