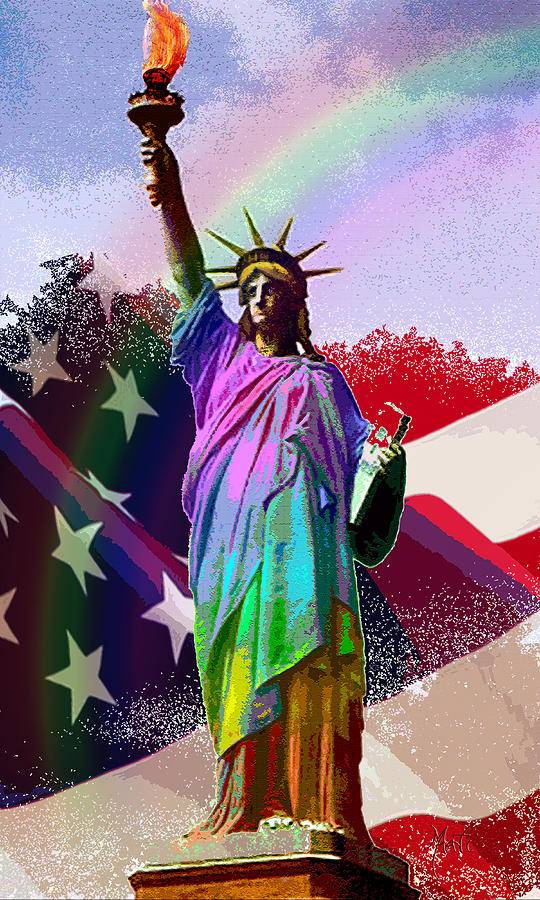 Her compassion, strength and perseverance against all odds, makes the Stature of Liberty the perfect partner for peace, activism, feminism, and peace.
I have taken some liberties (lol) with the dear lady.. hope you like her.

The Statue of Liberty (Liberty Enlightening the World; French: La Libert� �clairant le monde) is a colossal neoclassical sculpture on Liberty Island in the middle of New York Harbor, in Manhattan, New York City. The statue, designed by Fr�d�ric Auguste Bartholdi, an Italian-French sculptor,[7] and dedicated on October 28, 1886, was a gift to the United States from the people of France. The statue is of a robed female figure representing Libertas, the Roman goddess of freedom, who bears a torch and a tabula ansata (a tablet evoking the law) upon which is inscribed the date of the American Declaration of Independence, July 4, 1776. A broken chain lies at her feet. The statue is an icon of freedom and of the United States: a welcoming signal to immigrants arriving from abroad.
Bartholdi was inspired by French law professor and politician �douard Ren� de Laboulaye, who is said to have commented in 1865 that any monument raised to American independence would properly be a joint project of the French and American peoples. He may have been minded to honor the Union victory in the American Civil War and the end of slavery. Due to the troubled political situation in France, work on the statue did not commence until the early 1870s. In 1875, Laboulaye proposed that the French finance the statue and the Americans provide the site and build the pedestal. Bartholdi completed the head and the torch-bearing arm before the statue was fully designed, and these pieces were exhibited for publicity at international expositions.
The torch-bearing arm was displayed at the Centennial Exposition in Philadelphia in 1876, and in Madison Square Park in Manhattan from 1876 to 1882. Fundraising proved difficult, especially for the Americans, and by 1885 work on the pedestal was threatened due to lack of funds. Publisher Joseph Pulitzer of the New York World started a drive for donations to complete the project that attracted more than 120,000 contributors, most of whom gave less than a dollar. The statue was constructed in France, shipped overseas in crates, and assembled on the completed pedestal on what was then called Bedloe's Island. The statue's completion was marked by New York's first ticker-tape parade and a dedication ceremony presided over by President Grover Cleveland.
The statue was administered by the United States Lighthouse Board until 1901 and then by the Department of War; since 1933 it has been maintained by the National Park Service. The statue was closed for renovation for much of 1938. In the early 1980s, it was found to have deteriorated to such an extent that a major restoration was required. While the statue was closed from 1984 to 1986, the torch and a large part of the internal structure were replaced. After the September 11 attacks in 2001, it was closed for reasons of safety and security; the pedestal reopened in 2004 and the statue in 2009, with limits on the number of visitors allowed to ascend to the crown. The statue, including the pedestal and base, was closed for a year until October 28, 2012, so that a secondary staircase and other safety features could be installed; Liberty Island remained open. However, one day after the reopening, Liberty Island closed due to the effects of Hurricane Sandy in New York; the statue and island opened again on July 4, 2013. Public access to the balcony surrounding the torch has been barred for safety reasons since 1916.

This is a great composite Michele! I love the poster look too! LF

I like your "liberties" Michelle! And the history lesson! L/ f