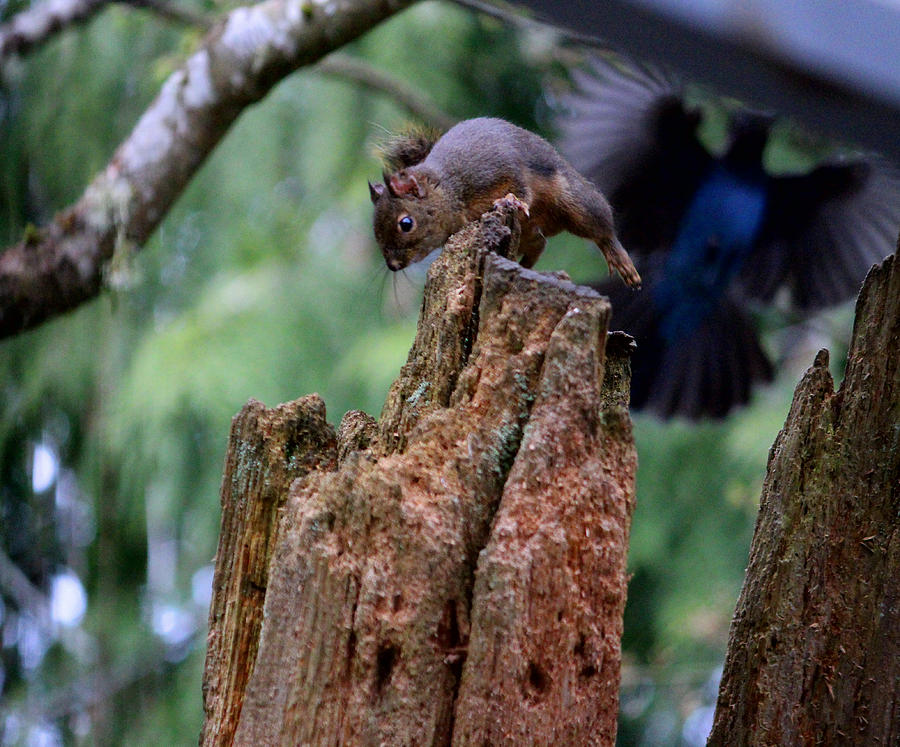 In this shot the table's are turned. Mr. Stetller's Jay attacks the native brown Douglas squirrel from the air. Air raid and attack from Steller's Jay. He gets "Bud" the Douglas squirrel to jump. Steller's Jay had the upper hand and wings this time! Sometimes they seem to be playing....other times, it seems like out and out war. Who needs television, these guys can be some great entertainment. Douglas Squirrel 3.... Steller's Jay 2. I keep a scorecard!
Here's a little info on the Blue Steller's Jay. The Steller￿s jay is a bold and aggressive species frequently found scavenging in campgrounds, picnic areas, and feeding stations in the West. The bird￿s flight is strong and steady, with wings rarely flexed above horizontal. Polytypic. Length 11.5" (29 cm). A nearly unmistakable dark blue, black-crested jay with variable white or blue markings on the head. The wings and tail are a vivid blue, with fine black barring. The head, including the crest; back; and throat are blackish. Juveniles are washed with brownish or grayish to the upper parts and are duller below.
Here's a little info on Mr. Bud the Douglas Squirrel. The Douglas squirrel, or chickaree (Tamiasciurus douglasii) measures 10 to 14 inches in length, including its tail. Its upper parts are reddish-or brownish-gray, and its under parts are orange to yellowish. The Douglas squirrel is found in stands of fir, pine, cedar, and other conifers in the Cascade Mountains and western parts of Washington.

Fantastic moment captured! Great visual of the activities from your description! Do you have a youtube channel? can make it a weekly show:) Love your work and commentary!

Congratulations your creative and unique art work is featured in the "Out Of The Ordinary" group!

JOE BLEDSOE, Thank you for being the first to feature my photo AIR ATTACK ON BUD in your longstanding and wonderful group WINGS. I appreciate it Joe!

I was so interested in the action shot of the little squirrel and the beautiful textures and color of the stump I almost missed the blue jay! Seems like this little guy needs a hideout with diner that won't fit the jay and big squirrel -- let them eat on the deck.

Teal, Thanks for coming by. The Steller's Jay took a part of the squirrel's ear off. So they both can really fight, and "mean it"..

Great capture dear Kym and of course love your title and write up. I agree who needs television when you have a live comedy show! l/f

What a lovely image Kym..great suject and detail! :) v/f