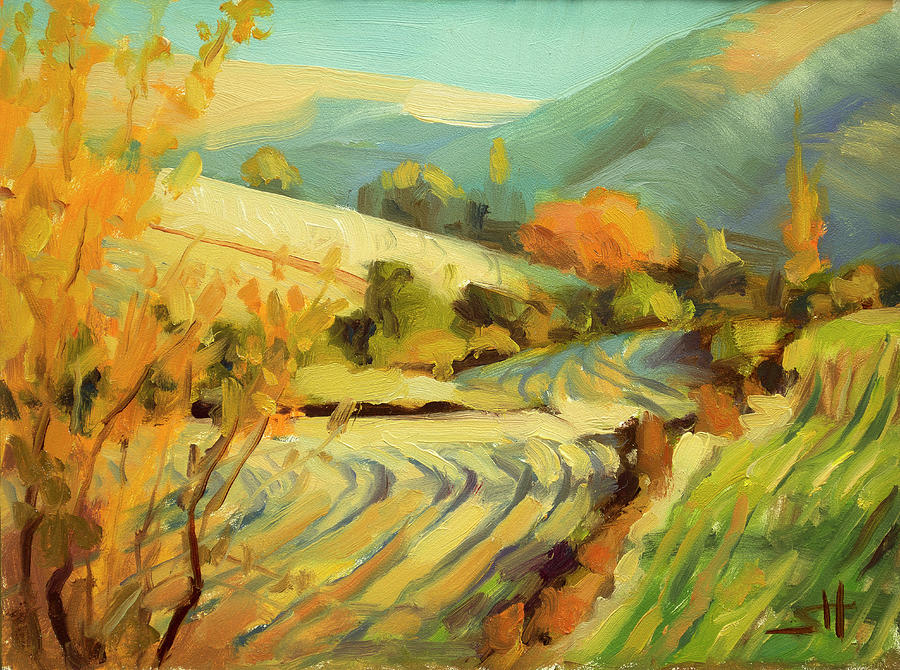 The fields of the country look different from season to season, their colors changing from the emerald greens of springtime to the golden, orange-toned grassy furrows of autumn.

After Harvest, the artwork, captures a moment of autumn color and feeling in the country. The viewer in the painting, standing atop a hill, looks down into the cut wheat of the Eastern Washington growing fields. Lightly patterned, like quilting on the surface of fabric, the fields give a sense of movement, but a tranquil one. It is quiet, and the only noticeable sound is that of the buzzing insects, but even they seem lazy, enjoying the heat of a late summer or early autumn afternoon.

The sky, blue overhead with the blue that is only found in late summer or autumn, contrasts with the gold of the fields, the blaze of orange in the bushes, and the entire landscape is like a quilt indeed, but one fashioned and created by outside of the indoor quilting studio.

After Harvest invites the viewer to step into this colorful landscape. It is not a wilderness, because the patterns of the harvester are obviously those done by human beings, and human beings with large, monstrous machines. It is, however, still a countryside, and the hills in the distance, covered with the trees and bushes, give evidence that this countryside retains areas that are not managed and plowed and put under the hand of man.

Indeed, the very pattern of the seasons shows that this earth – regardless of how much we step upon it and try to “manage” it – is under the hands of someone else. The colors at which we marvel each season develop without our hand being put in it, and each year they are different from the year before.

After Harvest celebrates this time between summer and fall – it is after the wheat has been harvested, and one can see the neat, tidy rows made as the harvester works its way through the fields. As August ends and September begins, the foliage around the feels begins its song of autumn, and before the leaves fall in preparation for winter, they turn a rainbow of colors to charm and mesmerize the adventurer hiking through.

There is a a definite charm and beauty in the land of the rural countryside, and a warm autumn afternoon – with the sky even bluer than blue in contrast to the colors of the foliage – is the perfect time to put on a light jacket, grab a water bottle, and take a leisurely hike over the hills and around the fields.

After Harvest invites the viewer to take such a hike, and we begin at the top of a hill, next to a tree that is in full autumn bloom. Somewhere at our feet is the narrow path that will take us down to the valley – it may be a path that hikers have created, or more likely, it is a deer trail made by the animals that call this area home.

If we are quiet enough, we may surprise one, or probably more, of these deer as they graze in the bounty that blooms before winter sets in. Whether or not we surprise a deer, or a rabbit, or some other creature rustling through the grass, it is worth enjoying the quiet by being quiet ourselves, marveling in the sound of the birds and the whisper of the breeze.

(The scene for After Harvest is located in Columbia County, near Dayton, Washington in the USA. But it is a scene that is not limited to one place -- the farm, the ranch, the land -- these landscapes are all over the world.)

After Harvest is featured in 27 Fine Art America groups.

Congratulations on your recent sale Steve!

Spectacular composition, lighting, shading, colors and artwork! F/L… voted for the one in the contest… FALL LOGO CONTEST FOR NO PLACE LIKE HOME GROUP!

Love the color palette and textures of this painting, Steve!

Is this a series?

Beautiful work of art; love your use of textures!

To the buyer from Mississippi of a print of the artwork After Harvest: I am very gratified that this work connected with you and will now grace your walls and life with a sense of contemplative beauty and serenity. Enjoy!

Thank you, Jane, for noticing and commenting.

A special thank you to the recent buyer from South Carolina: May "After Harvest" bring you a sense of ease and tranquility as you ponder the beauty of the countryside. Enjoy!

This is so brilliant and bright. FLTw

Congratulations, your creative and unique art work is Featured in the "Out Of The Ordinary 1 A Day" group! 6/16/19 l/f

Reminds me of the Palouse! Love it!

breathtaking beauty Stevwe ... such wonderful sweeping color and line ... you bring us right into heaven!!!!! l/f t and p

Congratulations on being selected as Artist of the Week. Well deserved, Steve. Beautiful painting and wonderful palette.

CONGRATULATIONS, Steve, You are the Featured Artist of the Week in the fine art group, Old MASTERS--Painters and Traditional Arts. As always, your work is beautiful, masterful! v/f/feature, pin, tw, fb promotion!