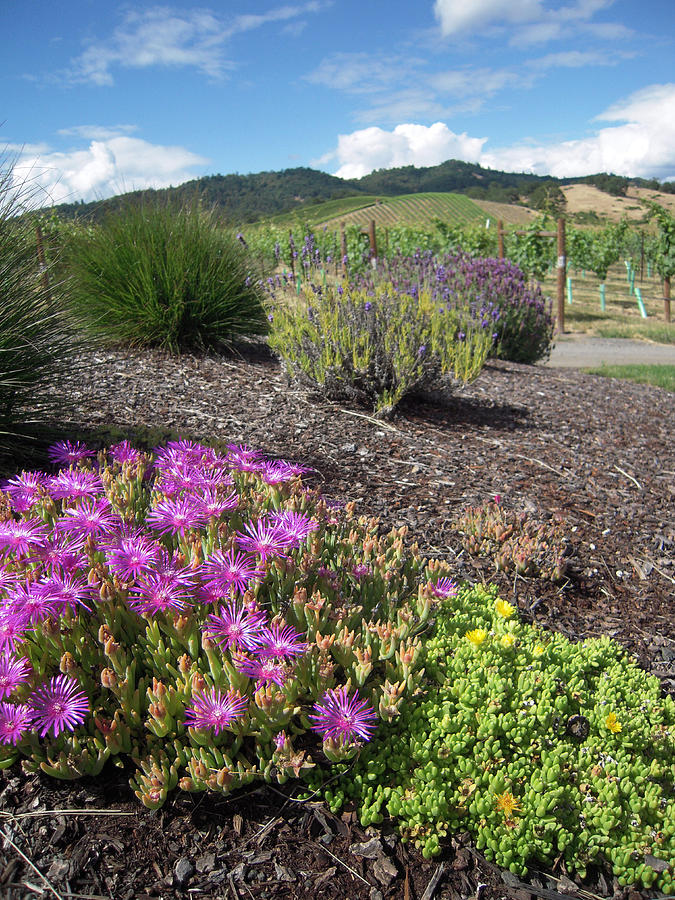 Here is a photo I took at Abacela, the award winning winery in Winston, Oregon. Hills of vineyards and lovely landscaping around the tasting center.

Abacela Story
For years Earl and Hilda Jones have pursued their passion to produce fine wine from Spain's noble Tempranillo grape... in America. Despite Tempranillo's obvious quality role in Spanish wine production and its utilization in America for more than a hundred years, Americans vintners had, by the early 1990's only produced jug quality wine from the varietal. Why was the wine industry in America trapped in this rut and unable to produce fine wines similar to those produced in Spain's Rioja and Ribera Del Duero? Travel and research in Spain revealed that a fairly specific climate, characterized by a cool spring, dry-hot summer and a cool early autumn was closely associated with and likely a key requirement for production of fine Tempranillo. Learning that in the USA the grape had been historically grown in the hot central valley of California, they suspected the inability of Americans to produce fine Tempranillo wine was the result of growing the variety in the wrong climate.

Given that the Joneses lived at that time on the subtropical Gulf Coast near Pensacola Florida they were well aware that a long distance move was likely required if they were ever to realize their dream. The question was where? Thus began the search for an American climate that was analogous, e.g. a holoclime, to the Spanish climate tightly linked with production of fine Tempranillo wine.

Searching for that holoclime lead the Joneses to many libraries and through books, climate records, and maps and eventually to visit each of the western U.S. states and finally to Southern Oregon. There they found an analogous climate to blanket much of Southern Oregon's Jackson, Josephine and Douglas counties.

From this climate zone the Joneses selected a site on south sloping hillsides in Douglas County's Umpqua Valley eleven miles southwest of Roseburg and in 1995 planted the first Tempranillo in the Pacific Northwest. To commemorate the event they named their new vineyard and winery Abacela from an ancient and now almost obsolete verb, 'abacelar' common to three Iberian languages-Spanish, Galician and Portuguese-and which means "to plant a grape vine."
With early success in producing Tempranillo, the Joneses began the Abacela vineyard research and development project to determine if other winegrapes might also thrive and produce fine wine in this unique terroir. This pioneering "project" has subsequently expanded into a 77 acre parcel growing over 20 wine grape varieties and a winery producing outstanding varietal wines many of which were firsts in the Pacific Northwest.

Why Tempranillo? Early on Earl had found certain Spanish wines to pair well with the spicy meats and peppery foods he enjoyed. His favorite Spanish reds, from the Rioja and Ribera Del Duero regions, simply held up better than French and Italian wines to these foods. Although enjoying these Spanish wines, Earl knew little of the varieties that they were made from because Spanish wine labels provided the area of origin but never included information on the winegrape(s) utilized in its production. Later he discovered that the principal winegrape used to produce both Rioja and Ribera Del Duero wines was Tempranillo.
Later, while searching for American Tempranillo wines he was puzzled to learn that while most French and Italian wine grapes were being grown and made into excellent wines in America, there was no varietal Tempranillo being produced. This fact was confounded by California's modest production of Tempranillo grapes, which although beginning almost a century ago, was as of 1990 being relegated to the role of a blending grape for production of jug wine.
Why?
Was quality limited in America by a deficit of some specific soil or climate essential or the presence in America of some occult anti-quality factor, e.g. a yet to be identified microbial or viral pest? Earl's curiosity was piqued and he saw in this vinous puzzle an opportunity to improve his understanding of Tempranillo viticulture and enology as well as visit and explore the culture of Spain. During that quest Earl and Hilda traveled to Spain and became fascinated with the culture of Castile. "Hilda and I became especially fond of their unique concept of tapas. At the days end, it seemed so remarkably civilized to sit down with friends and enjoy a small glass of wine paired with a harmonizing portion of food. What could be better?"

A combination of their new found enjoyment of Spanish culture, love for Tempranillo wines, and the exciting challenge of trying to produce a Spanish style Tempranillo varietal wine in America drove their dream of Abacela. Their passion fueled a scientific inquiry on both sides of the Atlantic and energized the planning, vineyard and winery work necessary to make the dream a reality.

Congratulations your beautiful work is being featured in The World We See Group:-)

Wonderful shot Michelle! I think I know this place!!

Wow, Joy, have you come south and visited our area? Next time write me and I will meet you. They now have Friday night wood fire pizza on the patio! and of course their wine is fabulous!

Lovely capture, Michelle! Gorgeous peek at the landscape of Winston, Oregon! I invite you to post this great piece to the Visions of Spring Group. It will surely make a great addition to that Group. F/L.

Thank you, Dora, I am so glad you invited me!

Your work is beautiful, Michele. I feel as if I'm standing right there, enjoying a beautiful day at this award-winning winery!

Thank you, Connie! If you ever come this way, you will love it. They have a new outdoor pizza oven and do special Friday night wine & pizza, all on a terrace in this beautiful setting.

Revisiting your fabulous gallery Michele... it seems many of your images are already among my favorites :)) Gorgeous pieces!!

Thank you, Sue.. ditto, yours are in mine too! Love your exceptionally unique and colorful work!

Michele,This is a most magnificent landscape. The composition, depth, lighting all superb! L/f

Thank you, Heinz, I am so honored by your compliment. Sometimes when I am crawling around on the ground (lol) getting the best shot I can, I wonder why I can't be normal like everyone else standing and shooting, but I am always looking for the best composition I can find. Having been schooled in a time when film was a precious costly commodity, I don't take a lot of shots, I try to capture the best possible each time.