A View Of The Snake River And Tetons 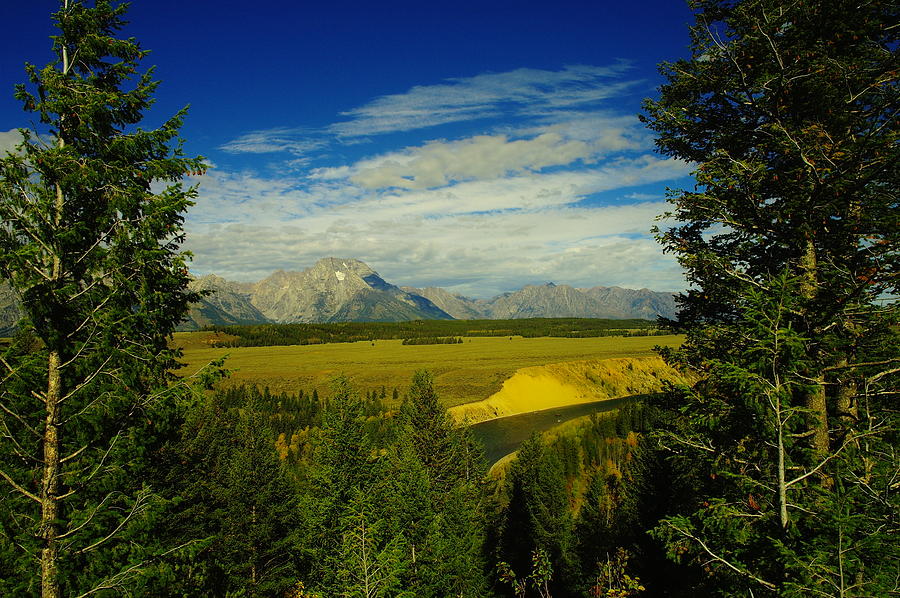 A View Of The Snake River And Tetons

The Snake is a major river of the greater Pacific Northwest in the United States. At 1,078 miles (1,735 km) long, it is the largest tributary of the Columbia River, the largest North American river that empties into the Pacific Ocean.[9] Rising in western Wyoming, the river flows through the Snake River Plain then rugged Hells Canyon and the rolling Palouse Hills to reach its mouth at the Tri-Cities of the state of Washington. Its drainage basin encompasses parts of six U.S. states, and its average discharge is over 54,000 cubic feet per second (1,500 m3/s).

Rugged mountains divided by rolling plains characterize the physiographically diverse watershed of the Snake River. The Snake River Plain was created by a volcanic hotspot which now lies underneath Yellowstone National Park, the headwaters of the Snake River. Gigantic glacial-retreat flooding episodes that occurred during the previous Ice Age carved out many topographical features including various canyons and ridges along the middle and lower Snake. Two of these catastrophic flooding events significantly affected the river and its surrounds.

More than 11,000 years ago, prehistoric Native Americans lived along the Snake. Salmon from the Pacific Ocean spawned in the millions in the river. These fish were central to the lives of the people along the Snake below Shoshone Falls. By the time Lewis and Clark crossed the Rockies and sighted the valley of a Snake tributary, the Nez Perce and Shoshone were the most powerful people in the region. Contact with Europeans introduced horses to some tribes, reshaping their lifestyles for the next few hundred years before outside settlement. Later explorers and fur trappers further changed and utilized the resources of the Snake River basin. At one point, a hand sign made by the Shoshones representing fish was misinterpreted to represent a snake, giving the Snake River its name.

By the middle 19th century, the Oregon Trail, a pioneer trail of which a major portion followed the Snake River, had been established. Steamboats and railroads moved agricultural products and minerals along the river throughout the 19th and early 20th centuries. The powerful, steep flow of the Snake has been utilized since the 1890s to generate hydroelectricity, enhance navigation and provide irrigation water from fifteen major dams that have transformed the lower river into a series of reservoirs, several of which have been proposed for removal to restore some of the river's once-tremendous salmon runs.

Oh my goodness!! This is a stunning image! I love this area of the country. I need to go back! :)

The colours are amazing, Jeff and I love the natural framing! l/f