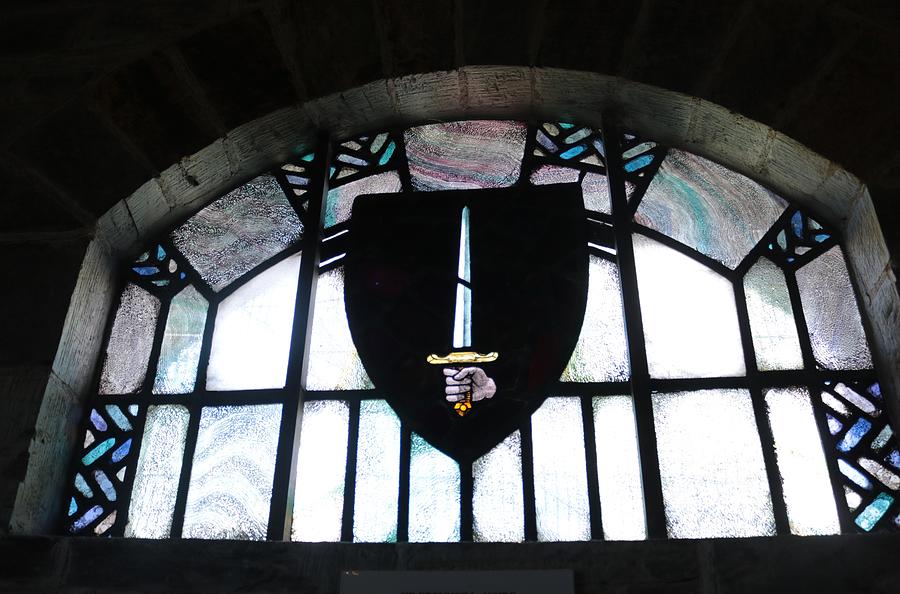 King Arthur's Hall (opened 1933) is a historic building in Fore Street, Tintagel, Cornwall, England, UK. Built in the early 1930s by Frederick Thomas Glasscock (died 1934), it originally served as the headquarters for a social organization known as the Order of the Fellowship of the Knights of the Round Table. It contains some works of art relating to the Arthurian legend and is now a popular visitor attraction for Arthurian enthusiasts, and has a bookshop devoted to the sub-ject at the front of the building.

The 72 stained glass windows illustrating the Arthurian tales are by Veronica Whall. These tell the story of King Arthur and show the coats of arms and weapons of the knights involved. Whall designed 73 windows for the hall. As of 1997 it is considered to be the largest col-lection of stained glass panels of King Arthur made in the 20th century and a great example of Arts and Crafts workmanship. There are also several paintings of scenes from King Arthur's life by William Hatherell

Nice detail and interesting history, congratulations on your feature!

Thanks Janis for Just Perfect feature

This was my favourite stained glass window in the recent challenge and the one I voted for. I klove the colours and simplicity of this glass. I remember this series from Redbubble. An instant favourite too.

Thank you Andrew, I must admit it appealed to me too for those reasons

Congratulations, your picture has been FEATURED on the home page in the group DEVON AND CORNWALL IN THE SOUTHWEST OF ENGLAND UK on 20th May 2022. I have Liked and Favourited this one....a lovely picture. You may see your image on the group home page and also in Discussions for this week's features. The link to the features presentation may be found on the group e mail and messages here are greatly appreciated. Thank you.

Excellent....I should imagine you were hard pressed to choose one from your lovely series of these windows.....voted for in the STAINED GLASS WINDOW IN THE UK contest in the group Best Of British

Thanks Enzewell Designs for Flags and Heraldry feature

Thanks Bob for Hodge Podge feature

Thanks Nader for Only Doors and Windows feature