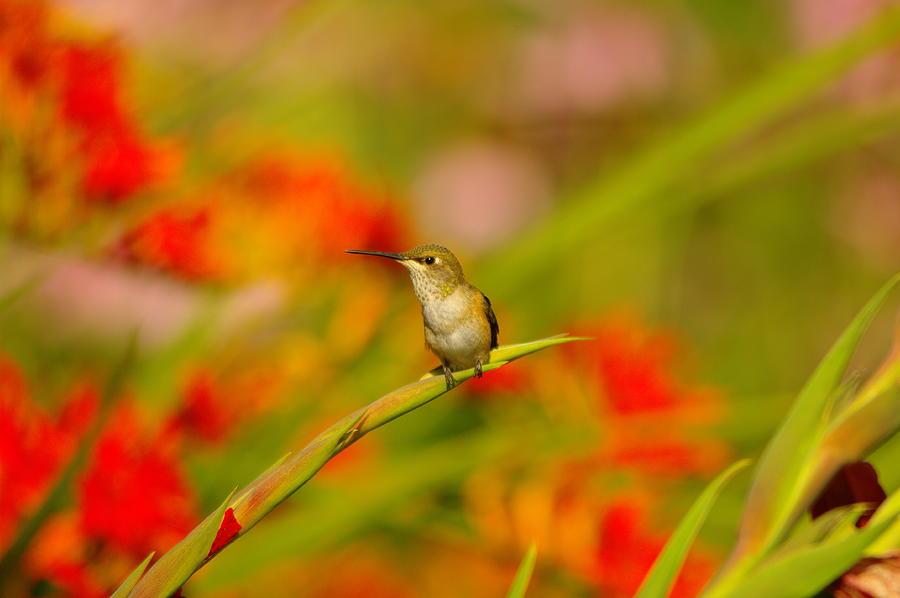 Hummingbirds are thought to have a long history; however, it is difficult to find out how long that history is. Hummingbird bones are so tiny and fragile; they just cannot survive the ravages of Mother Nature over time. Good thing there are quite a few stories that help us to fill in the blanks of the history of hummingbirds.

In the Taino traditions, the hummingbird is the symbol of the spreader of life on earth. The Taino believe that hummingbirds where once flies that the Sun Father (named Agueybaba) transformed into little birds. These people saw the hummingbird as being very peaceful, but able to protect the homeland with the heart of an eagle. To them, the hummingbird was a symbol of rebirth. Because of this the Taino Nation calls their warriors the Colibri Warriors or Hummingbird Warriors.

The Cherokees believe that a medicine man turned himself into a hummingbird to retrieve a lost plant. In another story a beautiful woman was courting both a hummingbird and a crane. She loved the hummingbird for his good looks and the crane for his wisdom. The Crane convinced her that there should be a race around the world with the winner getting her hand in marriage. She agrees thinking the hummingbird will win. Since the hummingbird needed to sleep at night and flies in a zigzag during the day, the crane won by flying all night long in a straight line. She reneged on her promise because the Crane was so ugly.

There are peoples of the Caribbean that believe that hummingbirds are the spirits of departed loved ones.

The Hopi and Zuni Nations will paint hummingbirds on water jars believing that the hummingbirds long ago intervened with the gods to bring rain to human kind. The story is that many years ago there was a huge famine with food and water becoming very scarce. During this time, a young boy and girl who were left alone while their parents were searching in vain for the needed food and water. While waiting, the boy made a toy hummingbird. His sister threw it into the air and it came to life. The hummingbird began to bring the boy and girl an ear of corn every day to help them survive. The hummingbird was very worried about his boy and girl so he flew to the center of the earth and pleaded with the God of Fertility to help. The God of Fertility took pity on them and began to provide rain for human kind. The parents returned from their search and they all lived happily ever after.

The Taroscan Nation believes that a hummingbird taught a woman how to weave beautiful baskets as payment for some sugar water during a large drought. Today, these baskets are used in the Day of the Dead Festivals.

The Apache Nation has a story of a young warrior named Wind Dancer who was born deaf, but could sing magical songs. These songs would bring healing and good weather. One day Wind Dancer rescued a woman Bright Rain from being attacked by a wolf. He instantly fell in love and married her. Tragically, Wind Dancer was killed in an errand of mercy, after which a bitter winter ensued. Suddenly, the winter would cease at the exact moment when Bright Rain would take a walk. Wind Dancer would visit Bright Rain in the form of a hummingbird during her walks and whisper sweetness into her ear. This would bring good weather to all.
First Flight: A Mother Hummingbird's Story

The Pueblo Nation also believes that many years ago, a demon lost a bet to the Sun and was blinded. The demon was so mad that he spewed out hot lave, catching the whole earth on fire. A hummingbird gathered rain clouds from all four directions to put out the fire, saving all life on earth. As the hummingbird flew away, he flew right through a rainbow creating the bright colors on the hummingbird's throat. Since then the Pueblo Nation will do a hummingbird dance with hummingbird feathers to bring rain.

The Hitchiti Nation believes that many years ago hummingbirds and herons where the best of friends. Both birds loved fish. Herons loved big fish and hummingbirds loved little fish. One day the Hummingbird King and the Heron King where talking and came to believe that there might not be enough fish in the world for each of their kind. They decided to race for the fish of the world to an old tree far far away. The first one to make it to the top of the old tree would get all the fish in the world. During the race, the hummingbird would get distracted with flowers and flit back and forth during the day and sleeping at night. While the heron would fly steadily forward though the night. The heron won the race and got all the fish in the world.

The Maya Indians believe that the very first wedding was a wedding between the first two hummingbirds on the planet. They tell a story of the Great God and how he had leftover pieces after making all of the other birds. The Great God did not want to waste any pieces, so he used the leftovers to create a hummingbird. The Great God wanted to make sure the hummingbird could fly well since he was so small. So the Great God gave the hummingbird the gift of extraordinary flight with the ability to fly forward, backwards, hover, and even upside-down. As the hummingbird flew up above the Great God, the wings made a humming sound of dzu-nu-ume, dzu-nu-ume. Because of this the Mayas called the hummingbird Dzunuume or The Hummer. The Great God liked this little bird so much; he made another as a mate for the first. The Great God told to couple that this was their wedding day and all of the other animals in the forest were invited. This was exciting for the other animals as this was the very first wedding, ever. All the birds sang. The spiders made a path of spider-webs and told the female to use their webs for her nest later on. Everything was beautiful, except for the hummingbirds. All the hummingbirds had where plain grey feather and looked quite ugly. All of the other birds offered some of their beautiful feathers to decorate the first bride and groom for their wedding. The Sun soon after came out and pronounced them married. The Sun also promised that forever more, the hummingbird's feathers would gleam with magic as long as the hummingbird looked toward the sun. On a side note, the Mayas also believed when the Sun wishes to court the moon, he will disguise himself as a hummingbird.
A Hummingbird In My House: The Story Of Squeak

The Aztecs God of Sun and War is called Hitzilopochti or the Hummingbird Wizard. This was the Aztecs patron god. The Aztecs believed that you could tell the Hitzilopochti by the bracelet of hummingbird feathers on his left wrist and he would occasionally peer out of a hummingbird's mouth. The Hitzilopochti lived inside Colhuacan (pronounced Kol-wah-kahn) or Curved Mountain. Aztec warriors believed that if they died in battle, they would be reincarnated as hummingbirds. Only Aztec royalty and religious leaders were allowed to wear hummingbird feathers. The Aztec's would decorate their kings with cloaks made entirely of hummingbird skins. One of these cloaks found its way to Rome and was given as a gift to the Pope. Soon after, there was a large market in Europe for hummingbird skins causing hundreds of thousands of hummingbirds to be killed across South America. These skins where shipped across Europe where they were purchased to make artificial flower, ornaments, dust catchers, and the feathers where used in decorations and jewelry.

Congratulations on your feature in 500 Views! I love hummingbirds! FL

So rare to see these little ones still. Wonderful capture of a quiet moment.

Pretty! Congrats on over 700 views!

Congratulations your work is featured on the homepage of the Pixels/FAA Group Beauty in Art! 4/25/17 - Please share your Feature in our Feature's Discussion thread! Tweeting!

Congratulations on your sale!!!!!!

Congrats on your sale Jeff!!

Congrats on your sale, Jeff!

Thanks Buyer from Clayton MO I appreciate it very very much!

Congrats on your sale, Jeff!

beautiful and congrats on the feature..voted #10

So lovely, wonderful how you have a diagonal divide between the orange & pink in back. The the shallow dof. and the bird, just perched on the spike...great stuff. f/v

P.S. Think this would look really neat cropped as a square too, with the bird to the right of center.

A great capture, Jeff. It's so rare to find a humming bird at rest.

Beautiful shot, gorgeous colors! Now featured on the group homepage of A Sense of Serenity :)

Oh my! This is wonderful Jeff! F/V