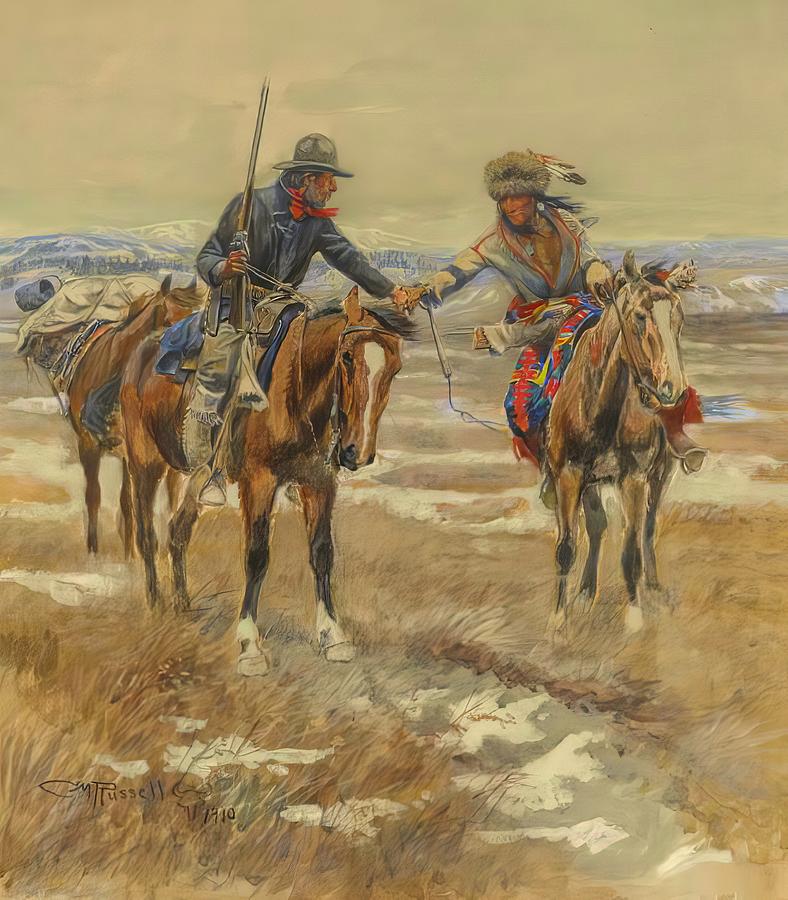 Charlie Russell, Charles Marion Russell (b. 1864, Oak Hill, Missouri - d. 1926, Great Falls, Montana), also known as C.M. Russell, was one of the great artists of the American West. Russell created more than 2,000 paintings of cowboys, Indians, and landscapes set in the Western United States, in addition to bronze sculptures. His mural entitled Lewis and Clark Meeting the Flathead Indians hangs in the state capitol building in Helena, Montana. His 1918 painting Piegans sold for $5.6 million dollars at a 2005 auction.

Childhood
Art was always part of Russell's life. As a child, he drew sketches and made clay figures of animals. He had an intense interest in the wild west and would spend hours reading about it. He would watch explorers and fur traders who frequently came through Missouri and finally, after years of dreaming, acted upon his ambitions. At the age of sixteen, he left school and went to Montana to work on a sheep ranch.

Discovery
In 1882, at the age of eighteen, Russell worked as a cattle hand. The harsh winter of 1886 and 1887 provided the inspiration for a painting that would give Charlie his first taste of publicity. According to stories, he was working on the O-H Ranch in the Judith Basin of Central Montana when the ranch foreman received a letter from the owner, asking how the cattle herd had weathered the winter. Instead of a letter, the ranch foreman sent a postcard-sized watercolor Charlie painted of gaunt steer being watched by wolves under a gray winter sky. The ranch owner showed the postcard to friends and business acquaintances and eventually displayed it a shop window in Helena. After this, work would come steadily to the artist.

Adulthood
In 1896, he married his wife Nancy. In 1897, they moved from the small community of Cascade, Montana to neighboring Great Falls, where Russell spent the majority of his life from that point on. There, he continued with his art, becoming a local celebrity and gaining the acclaim of critics worldwide. As he kept primarily to himself, Nancy is generally given credit in making Russell an internationally known artist. She set up many shows for him all through out the United States and in London creating many followers of Russells work.

On the day of Russell's funeral in 1926, all the children in Great Falls were released from school to watch the funeral procession. Russell's coffin was displayed in a glass sided coach, pulled by four black horses.

Tributes
In 1965, a high school was built on the north side of the Missouri River and named C.M. Russell High School, in honor of Russell and his legacy.

Some of Russell's paintings were shown during the credits of the television series How the West Was Won.

Along with Jeannette Rankin, the first female member of Congress, Charles M. Russell represents Montana in the National Statuary Hall Collection in the United States Capitol.