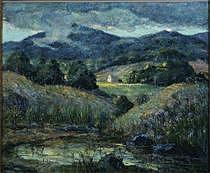 This is a reproduction of Ernest Lawson’s “Approaching Storm” of 1920 when he was forty-seven years old. This masterpiece is an oil on canvas mounted on panel and measures 62.8 by 76.2 centimeters. The artist was born in Halifax, Nova Scotia and settled in Kansas City in 1888 when he was fifteen years old. Three years later he moved to New York City where he studied under Impressionists. He went to France where he painted en plein air and met many prominent French artists as well as Somerset Maugham. He returned to the United States and had his first solo exhibition in 1907. He joined “The Eight” made up of many of the Ashcan School in 1908 and enjoyed moderate success until he moved to Flordia in 1936. He died under mysterious circumstances in the surf off Miami Beach in 1939. This masterpiece is in the Phillips Collection in Washington, DC.