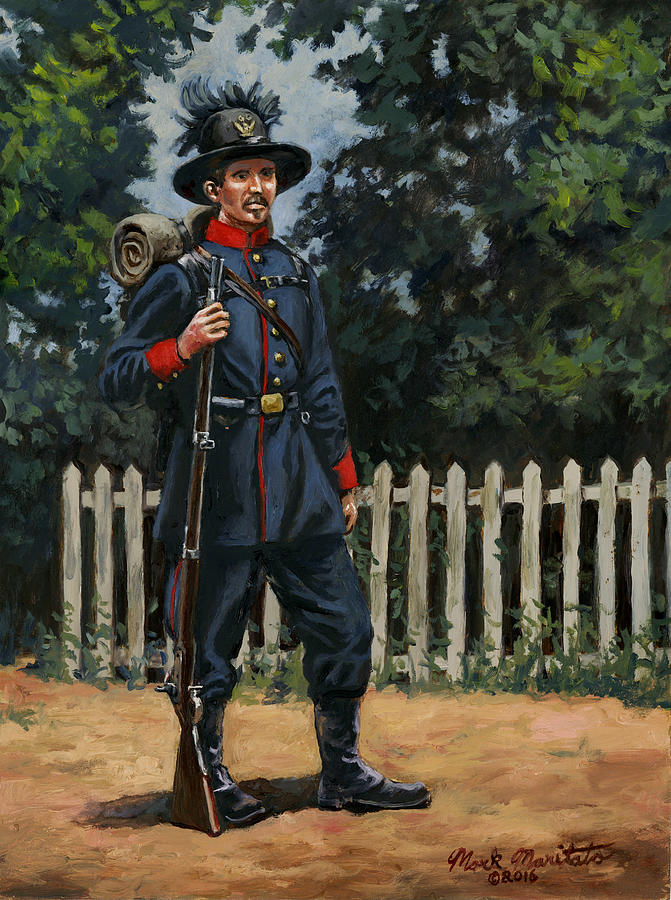 The original artwork is available. Please contact Mark Maritato for pricing and details.

Thirty-ninth Infantry.�Cols., Frederick G. D'Utassy, Augustus Funk; Lieut.-Cols., Alexander Repetti, Charles Schwartz, James G. Hughes, John McE. Hyde, David A. Allen; Majs., Charles Wiegand, Anton Vekey, Charles Schwartz, Hugo Hillebrandt, Charles C. Baker, John McE. Hyde, David A. Allen, Charles H. Ballou. The 39th, the "Garibaldi Guard," recruited in New York city, was composed of three Hungarian companies, three German, one Swiss, one Italian, one French, one Spanish and one Portuguese, most of whose members had already seen active service. It was mustered into the U. S. service at New York, May 28, 1861, for three years and left the state for Washington on the same day. Camp Grinnell was established near Alexandria and occupied until July 17, when the 39th participated in the movement of the army toward Manassas with the 1st brigade, 5th division, though in the battle of Bull Run the regiment was but slightly engaged. After a few weeks at Alexandria much ill feeling prevailed over the failure to receive some expected privileges and 50 members of Co. G mutinied, but returned to the command after being disciplined by arrest and imprisonment. Until November it was encamped near Roach's mills, when winter quarters were established at Hunter's Chapel. The brigade, originally commanded by Gen. Blenker, was in the spring of 1862 commanded by Gen. Stahel and served in Blenker's division of Sumner's corps. In April, 1862, the division was assigned to Gen. Fremont's command and joined his forces May 11, taking part in the engagements near Strasburg and at Cross Keys. On June 26 the 39th was assigned to the 1st brigade, 3d division, 2nd corps of the army under Gen. Pope, and encamped at Middletown, Va., during July and August. The regiment shared in the disaster at Harper's Ferry in Sept., 1862, and in the surrender 530 of its members fell into the hands of the enemy, but were paroled and proceeded to Camp Douglas, Chicago. They were exchanged in November, returned to Washington and established winter quarters at Centerville, where the regiment was assigned to the 3d brigade, Casey's division, 3d corps in Jan., 1863. In June, 1863, it became part of the 3d brigade, 3d division, 2d corps, and moved to Gettysburg, where it fought valiantly in the front of the left center, with a loss of 95 killed and wounded, the brigade losing six field officers killed or seriously wounded. Three battle flags were captured by the 39th, a Mass. battery was recaptured, and the regiment received official commendation for its valor. Moving southward with the army, the regiment encountered the enemy at Auburn ford and Bristoe Station in October; participated in the Mine Run campaign; went into winter quarters at Brandy Station, where in Dec., 1863, four new companies were received; in Jan., 1864, two others were added to the regiment, which had been previously consolidated into a battalion of four companies. In February it was active at Morton's ford; was assigned in March to the 3d brigade, 1st division, 2nd corps; shared in the Wilderness campaign, being active at the Wilderness, at Todd's tavern, the Po river, Spottsylvania, the North Anna, Totopotomoy and Cold Harbor. On June 25, 1864, the origi-nal members not reenlisted were mustered out at New York city, the remainder of the regiment was left in the field and moved with the Army of the Potomac to Petersburg. Seven companies, known as the 39th battalion, were assigned to the consolidated brigade, 2nd corps, and were engaged at Petersburg, Deep Bottom, at Reams' station, Hatcher's run, White Oak ridge, and in the final assault on the Petersburg fortifications April 2, 1865. The battalion then joined in the pursuit of Lee's army and performed various routine duties in the vicinity of Richmond until July I, 1865, when it was mustered out at Alexandria. The 39th lost during its term of service 119 by death from wounds, and 159 by death from accident, imprisonment or disease, of whom 94 died in prison.