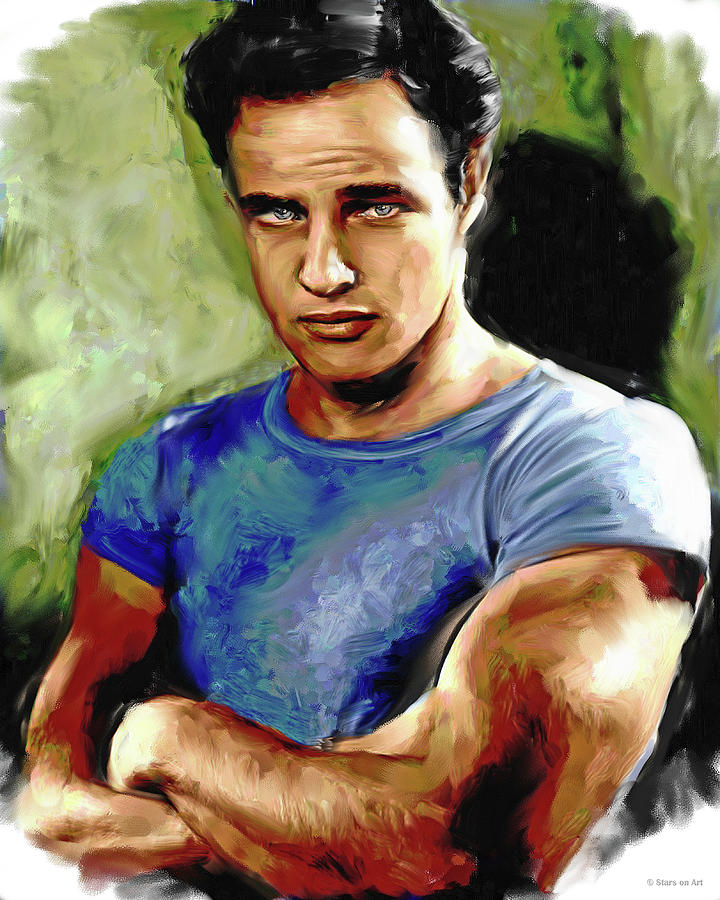 Painting of actor Marlon Brando. Brando (1924 – 2004) was an American actor whose career spanned 60 years, during which he twice won an Academy Award for Best Actor. He is well-regarded for his cultural influence during the 20th-century film. He was among the first actors to introduce method acting, derived from the Stanislavski system he studied at the Actors Studio.

In the 1940s, Brando was one of the Actors Studio's early members, a workshop for professional actors. As a result, in 1947, Brando exploded into Broadway stardom with his forceful portrayal of the lower-class Stanley Kowalski in Tennessee Williams's "A Streetcar Named Desire." Under director Ella Kazan's guidance, his naturalistic style of acting and his casual, mumbling delivery heralded "the Method" as a new style of acting.

Throughout the 1950s, Brando's charisma made him an artistic and social force. Younger audiences saw him as the rebellious, nonconforming prototype of the beat generation, while older audiences often saw him as an antisocial menace. Yet audiences and critics agreed that he was one of the most original and compelling personalities to act on the screen in a long time. He was Oscar-nominated for playing Emiliano Zapata in "Viva Zapata!" (1952), Mark Antony in "Julius Caesar" (1953), and for his role in "Sayonara" (1957). He won an Academy Award for "On the Waterfront" (1954).

In the 1960s, he starred in "Mutiny on the Bounty" (1962). The following decade, Francis Ford Coppola starred him in "The Godfather" (1972), for which he won his second Academy Award and made him a top box-office star.

In the 1970s, Brando acted in "Superman" (1978), "Apocalypse Now" (1979), and "The Formula" (1980). The American Film Institute listed him as the fourth-greatest movie star among male movie stars. Many consider him the greatest actor the American screen has ever known.
(credit: Wikipedia)