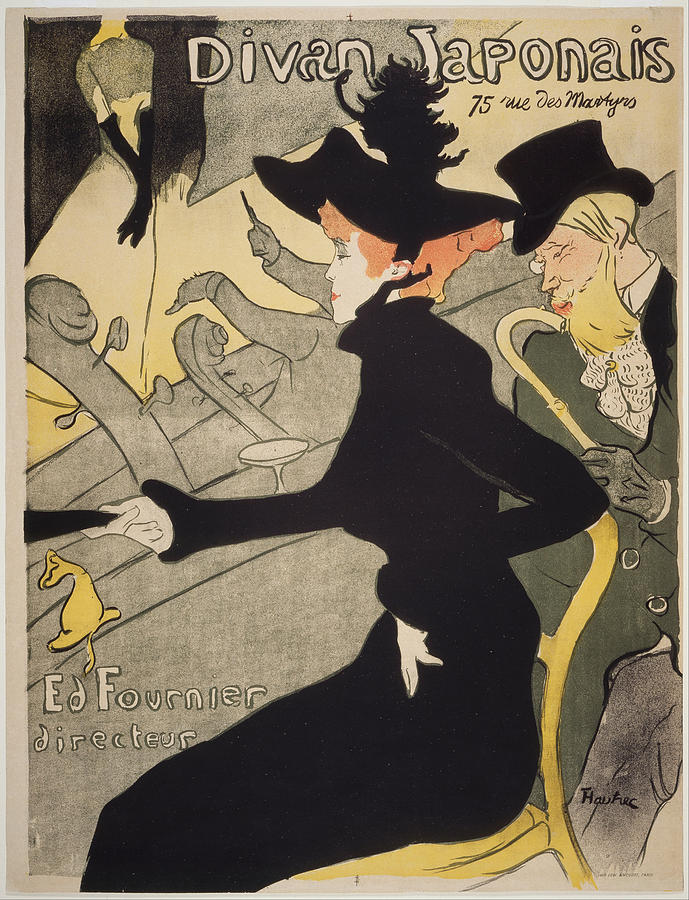 Henri De Toulouse-Lautrec Divan Japonais
Henri Marie Raymond de Toulouse-Lautrec-Monfa, also known as Henri de Toulouse-Lautrec was a French painter, printmaker, draughtsman and illustrator whose immersion in the colourful and theatrical life of Paris in the late 19th century yielded a collection of exciting, elegant and provocative images of the modern and sometimes decadent life of those times. Toulouse-Lautrec is among the best-known painters of the Post-Impressionist period, a group which includes C�zanne, Van Gogh and Gauguin. In a 2005 auction at Christie's auction house, a new record was set when La blanchisseuse, an early painting of a young laundress, sold for US$22.4 million.
Throughout his career, Toulouse-Lautrec created 737 canvases, 275 watercolours, 363 prints and posters, 5,084 drawings, some ceramic and stained glass work, and an unknown number of lost works. His debt to the Impressionists, in particular the more figurative painters Manet and Degas, is apparent. His style was influenced by the classical Japanese woodprints which became popular in art circles in Paris. In his works can be seen parallels to Manet's detached barmaid at A Bar at the Folies-Berg�re and the behind-the-scenes ballet dancers of Degas.
He excelled at depicting people in their working environments, with the colour and movement of the gaudy night-life present but the glamour stripped away, and was masterful when painting crowd scenes in which the figures are highly individualized. At the time that they were painted, the individual figures in his larger paintings could be identified by silhouette alone, and the names of many of these characters have been recorded. His treatment of his subject matter, whether as portraits, scenes of Parisian night-life, or intimate studies, has been described as both sympathetic and dispassionate.
Toulouse-Lautrec's skilled depiction of people relied on his painterly style which is highly linear and gives great emphasis to contour. He often applied the paint in long, thin brushstrokes which would often leave much of the board on which they are painted showing through. Many of his works may best be described as drawings in coloured paint.