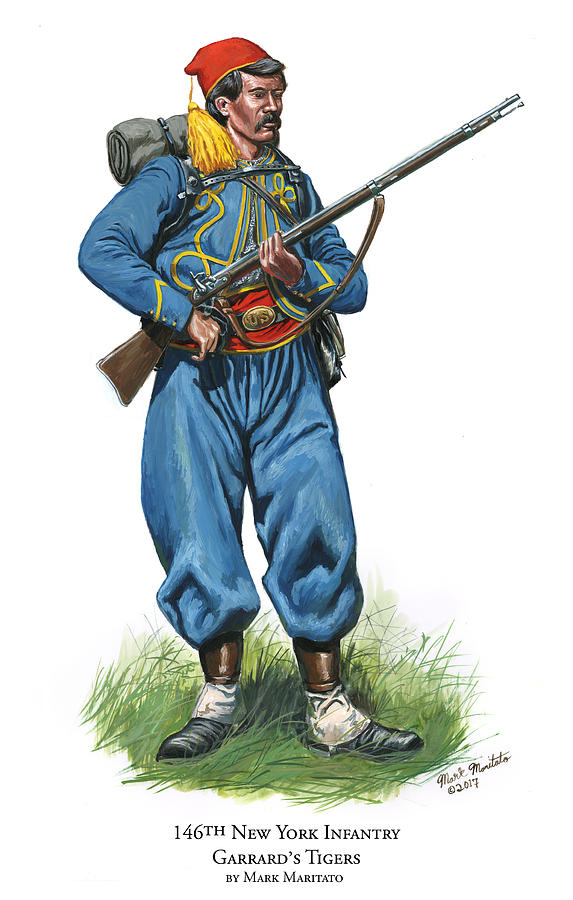 Here we have a soldier uniform study of a Civil War soldier of the 146th New York infantry Known as "Garrard's Tigers" This regiment was instrumental in the defense of Little Round Top during the Battle of Gettysburg. The 146th New York was one of the units at the battle dressed in their recently issued colorful Zouave uniform as illustrated here.

The following is taken from New York in the War of the Rebellion, 3rd ed. Frederick Phisterer. Albany: J. B. Lyon Company, 1912.
Mr. Henry S. Armstrong received authority, August 25, 1862, to recruit this regiment in Oneida county; it was organized at Rome, with Kenner Garrard as Colonel; and there mustered in the service of the United States for three years October 10, 1862. It received by transfer the three years' men of the 5th and 17th Infantry May 4 and June 25, 1863, respectively; a few men, who had originally been members of the 2d, 9th, 16th, 18th, 30th, 34th and 37th Infantry, in January and April, 1864; and some of the men of the 44th not mustered out with their regiment, October 11, 1864.
The companies were recruited principally: A at Utica; B at Vernon, Rome and Annsville; C at Utica and Rome; D at Boonville, Hawkinsville, Rome and Whitestown; E at Camden, Augusta, Rome, Utica and Marshall; F at Utica, Lee, Rome, Florence, Annsville, Ava, Marcy and Whitestown; G at Clinton, Kirkland, Bridgewater and Plainfield; H at Utica, Rome and Sangerfield; I at Trenton, Remsen, Western, Westmoreland, Steuben, Lowell, Rome, Vernon and Verona, and K at Paris, Clayville, Utica, Marcy, Clinton, Deansville, Marshall and Whitesboro.
The regiment left the State October 11, 1862; it served in Casey's Division, defenses of Washington, from October, 1862; in the 3d Brigade, 2d Division, 5th Corps, from November 6, 1862; in the 1st Brigade, 5th Division, 5th Corps, from March, 1864; in the 1st Brigade, 2d Division, 5th Corps, from June 6, 1864; and, commanded by Col. James J. G. Grindlay, it was honorably discharged and mustered out, July 16, 1865, near Washington, D. C.
During its service the regiment lost by death, killed in action, 3 officers, 81 enlisted men; of wounds received in action, 4 officers, 46 enlisted men; of disease and other causes, 2 officers, 187 enlisted men; total, 9 officers, 314 enlisted men; aggregate, 323; of whom 1 officer, 87 enlisted men died in the hands of the enemy.