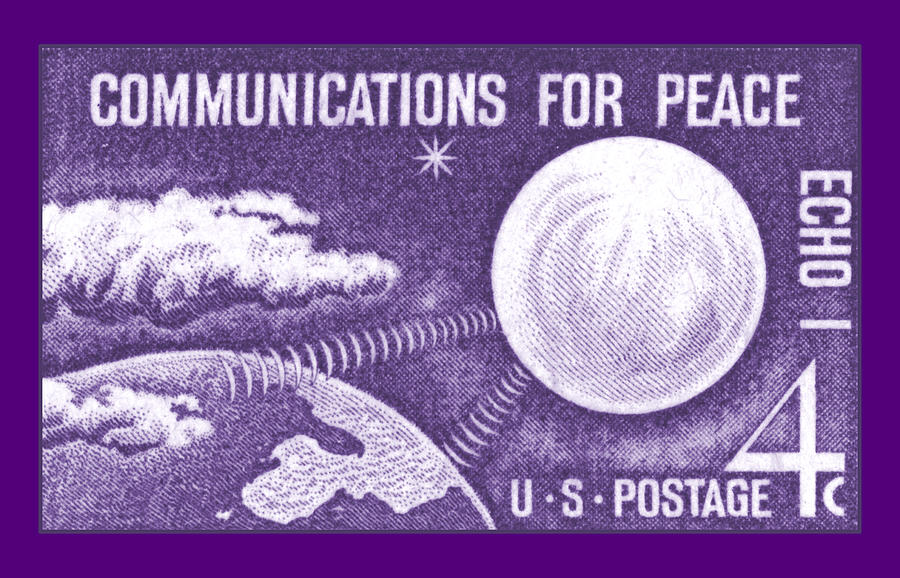 Following the failure of the Delta rocket carrying Echo 1 on May 13, 1960, Echo 1A (commonly referred to as just Echo 1) was successfully put into a 944 to 1,048 mi orbit on August 12, 1960, by NASA. The 100 ft. diameter balloon was made of ultra thin (0.0050 in) metalized Mylar polyester film and was successfully used to reflect transcontinental and intercontinental telephone, radio, and television signals. The satellite also aided in the calculation of atmospheric density and solar pressure due to its large area-to-mass ratio.


Echo 1 sits fully inflated at a Navy hangar in Weeksville, North Carolina
Because its shiny surface the large balloon-like satellite was also reflective of visible light rays, Echo 1A was visible to the naked eye over most of the Earth. Echo 1 was a passive communications satellite: it functioned as a reflector, not a transmitter. After it was placed in a low Earth orbit (LEO), a signal would be transmitted from Earth to the Echo satellite and then reflected or bounced off its surface, and then returned to Earth. It was the pioneer of communications satellites. Because it was brighter than most stars, it was seen by more people than any other man-made object in space at that time. Upon reentry into Earth's atmosphere ECHO 1A burned up on May 24, 1968.[8]

This was the first 'Space Stamp' with an actual subject of a real space vessel, unlike the generic or symbolic rocket depicted in the Fort Bliss issue of 1948. The U.S. Post Office issued this 4-cent Echo I "Communications for Peace" commemorative stamp through the Washington, D.C., post office on December 15, 1960. The stamp was produced and issued to honor the world's first communications satellite. Designed by Ervine Metzl, the stamp was printed by the rotary process, electric-eye perforated, and issued in panes of fifty stamps each. Quantities issued totaled more than 120 million.