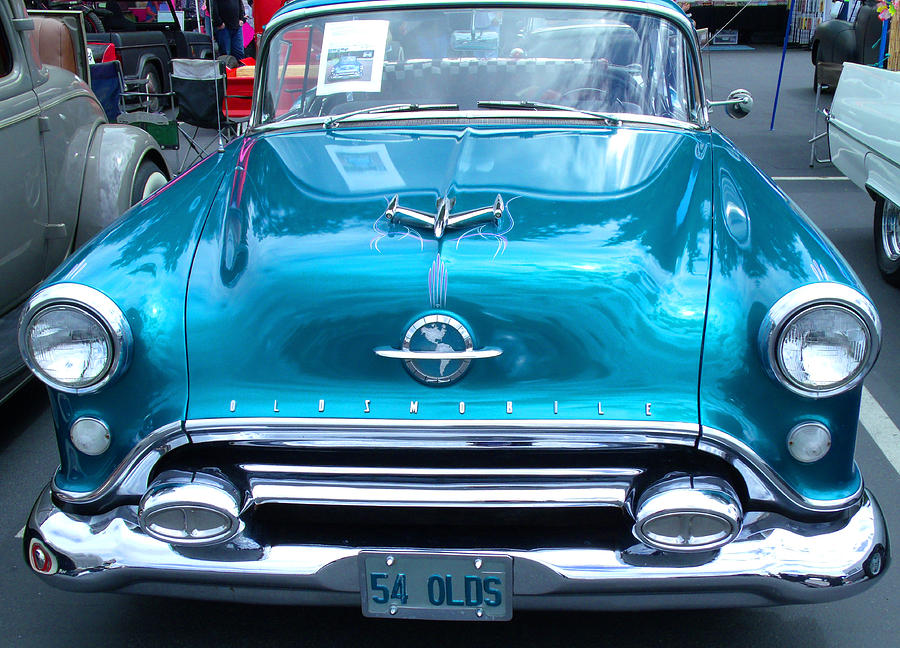 This 1954 Oldsmobile is a real beauty. So much chrome and design in this beast of a car. I love it. It has an electric blue shade that is really fine! I love these MOPAR cars!
The 1954 Oldsmobile 88, Super 88, and Ninety-Eight were introduced on January 20, 1954. That was strange, because General Motors usually announced its new cars in the autumn of the previous calendar year, not after the first of January. At a press conference, Oldsmobile General Manager Jack Wolfram offered what may have been a partial explanation for the postponement: "The new 1954 Oldsmobile models were originally planned for release in 1955. But original plans were scrapped early in 1953 when it was found possible to move the 1955 models up to 1954." Wolfram's statement began a controversy among motoring historians that continues to this day. For example, Dennis Casteele wrote in his book, The Cars of Oldsmobile, "This was probably just an advertising claim as General Motors, with its interdivisional sharing of body design, didn't operate that way."
However, automotive journalists Jan E. Norbye and Jim Dunne were convinced it happened with the 1954s. As they stated in their history Oldsmobile 1946-1980: The Classic Postwar Years, "[T]he cars that were first designed for 1954 were shown to the top management of GM in November 1952. GM President Harlow] Red Curtice blew his stack. The cars were lumpy, warmed-over, unimaginative -- worse than the '53 models, he is supposed to have said." As for who suggested junking the original 1954s and putting the 1955s into production a year earlier than intended, Norbye and Dunne speculated about several possibilities and finally picked the most likely."One story has it that Louis C. Goad, then executive vice-president with overall responsibility for the Car and Truck Group, simply asked the question in a meeting: 'The designs for the 1955 cars are pretty well finished. Would it be possible to get them into production sooner?' No matter how it came about, it was possible. And it was done."

Magic - how you captured the still colorful action, with such perfect focused depth of field. - If you only had a racoon in the driver's seat.

I did forget to mention.......... Having been a professional photographer, Great picture Kym! This car has character and you captured a beautiful side of her. Good job!

Jeff, Thanks for the compliments. Wow, you are a professional photographer AND owned this car! Life is good.. How ever did you muster the strength up to sell her?

My car!! lol I used to own this car. The photo's don't do justice to the detailed pen-stripping, hood, sides, trunk and the work on the dash is awesome. Where is the car now? I owned it for about 6 years. Great cruising but wow, the amount of time polishing chrome! Great car, great times. BTW - the color is "Corvette Teal" The restoration was done in the Bay Area, sorry can't remember the name but it was by a well known restorer. Jeff Williamson - Port Townsend.

Jeff, That is a really cool car you used to own. Thanks for telling me about your previous ownership. This car was at a car show in Silverdale. Small world of cars. Corvette Teal....well it was a great choice for color..

PAMELA JOHNSON, Hello new group leader, Thank you for the "triple features" today. I appreciate the feature of my photo 1954 OLDSMOBILE BLUE in your new group called BLUE. Happy Super Moon Monday to ya!

Marvelous capture i love it , v

love the car and color blue kym!what a classic:) v/f

Had an uncle who owned one of these. The big blue bomber! - v Lorenzo

Lorenzo, I like that you call it THE BIG BLUE BOMBER.. that makes me laugh! I hope you got to ride in it? Thanks for your visit and vote today!

Jack, Happy Thursday to you! Thank for coming by and giving this a vote Jack!

KLAAS HARTZ, Happy Thursday to you! Thank you for the multiple features the other day! I appreciate the feature of my photo 1954 OLDSMOBILE BLUE in your group COLORFUL AND FASENTENREIC.. I appreciate it very much Klaas!

MICHEL SOUCY, Thank you for the multiple features the other day! I appreciate the feature of my photo 1954 OLDSMOBILE BLUE in your group VERSATILE PHOTOGRAPHY, I appreciate it very much Michel!

JIM CARRELL, Thank you for the feature of this gorgeous classic car in the photo named 1954 OLDSMOBILE BLUE.. in your beautiful and very big group COMFORTABLE ART LIMIT 2.. Sorry it took me so long to give you your props Jim. Thanks again!

Frank!! You're alive, he's alive! Thanks for stopping by! Good to see you!

What an awesome shot of this beauty! f/v

Jeremy, Thanks for your visit and vote today! Long time no see!

Jim, Thanks so much, of course I didn't do anything but shoot the picture of the car. I gotta hand it to the guy that painted it! Thanks for your votes too!

RANDY (BLUE ELVIS) ROSENBERGER, Happy Wednesday Hump Day! Thank you for the feature today of my photo 1954 OLDSMOBILE BLUE! in your group WISCONSIN FLOWERS AND SCENERY~ I appreciate it Randy!

ANASTASIA, Hello my friend! Happy Wednesday Hump Day! Thank you for the feature today of my photo 1954 OLDSMOBILE BLUE! in your group PHOTOSRUS~ I appreciate it Anastasia~

Love the beauty of this piece and the quality and care that went into its composition! It is my pleasure to PROMOTE this piece of beauty on our FEATURED ARTWORK section of the Wisconsin Flowers and Scenery group. Thanks for sharing! fave and vote Forever, Elvis

Randy, (Blue Elvis) This is a car you should drive! Thanks for the notes, votes, and promotes.. You are a real treasure Randy!

Eddie, Thanks for your constant support and compliments.. and votes!

Bob, Me too! Thanks for stopping in and giving this your votes and such!

Awesome , spotless detail Kym! ANd Ive never seen one of those, thank you for showing me:) f.v

Eti, Thanks for your frequent and wonderful visits! Again, I'm behind in my replies..

1954 was a pretty wonderful year! This is really a pretty car! Love the hood ornament over the world design...looks like a modernistic plane flying over the globe! . . . . . gorgeous blue color! ....fav/v9

Karen, Thanks for all your votes and notes, and promotes.. I really appreciate it!

That's a beauty of a car, nice shot Kym. f/v

Chris, thanks for your notes and votes the other day!

KLAAS HARTZ, Happy Monday to you! Thank you for the feature my photo 1954 OLDSMOBILE BLUE in your group SMALL SHOWROOM.. I appreciate it Klaus!

Love the way you brought out the color and shine in this beauty! VF

Mary, Thanks so much! I wish I could take credit for the color of this beauty, I just snapped the picture.. I appreciate your vote and visit today!

This is so cool! I love the colors and the reflections.

Odd, It's good to see you! I'm glad to know you like COLOR.. Thanks for your visit!

JAMES LANIGAN THOMPSON, Thank you for the feature of my photo 1954 OLDSMOBILE BLUE in your group BEAUTY.. I appreciate it James!

MARK SPEARMAN, Thanks to you I have now memorized my MOPAR CARS! Thank you for the feature my photo 1954 OLDSMOBILE BLUE in your group AMERICAN MUSCLE CARS 1950 to 1970.. I appreciate it Mark!

JOUKO LEHTO, Thank you for being the first to feature my photo 1954 OLDSMOBILE BLUE in your group ART FROM THE PAST.. I appreciate it Jouko!

Simply Sensational to see these Classics , such a super capture dear Kym , so made my day to view perfection .. Woawwwwwwwwwwww

Paul, Thanks for dropping in and leaving a cool comment on this cool blue Olds..

Ruth, Your blouse and this care are about the same gorgeous color of Electric Blue... Thanks for stopping in!

Fabulous shot and color on this classic beauty! v/f

Donna, Thanks, isn't the color "Electric"?

A fantastic image of this classic Oldsmobile, Kym~~a terrific paint job! Loved the cars from that era~ well, I was there!! Have a great weekend!!! F&V!

Will, Thanks for your visit and comments.. I love this blue too! Hey you would look good in this with that blue shirt you are wearing! Thanks for the votes and sentiments!